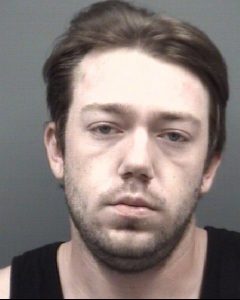 SALISBURY — A Salisbury man remains in the Rowan County jail after a traffic stop for not using his headlights led to a felony drug charge.

Police officers said the found methamphetamine in his vehicle.

An officer stopped the 1997 Dodge Ram that Thomas was driving just before 2 a.m. Tuesday in the 1000 block of East Innes Street. Thomas didn’t have the vehicle’s headlights on, according to a department report.

The officer checked the vehicle’s license plate and determined the tag did not belong on the pickup. Police brought in a K-9 unit, and the dog alerted officers to the presence of narcotics. The officer searched the vehicle and found meth in a plastic bag that was in a cigarette case, as well as a glass smoking pipe, the report said.

Officials said Thomas had a counterfeit $100 in his wallet.

Thomas remains in the Rowan County Detention Center under a $3,000 secured bond.

In other Salisbury police reports:

• First Bank reported Monday that someone used an account without authorization in the 700 block of Mack Street.

• A woman reported Monday that her back door area was vandalized in the 400 block of West Horah Street.

• Police investigated a theft from a vehicle parked in the 500 block of White Oaks Drive on Tuesday.

• A woman reported Tuesday that she was the victim of fraud via email between Sept. 12 and Sept. 13 in the 200 block of Pearl Street.

• A man reported an assault Monday in the 1100 block of Tarheel Trail.

• A man reported a break-in Monday in the 900 block of Goodnight Road.

• A man reported a stolen trailer Monday in the 400 block of McCarns Street, Mooresville.

• A man reported a stolen vehicle Monday in the 6700 block of Goodman Lake Road.