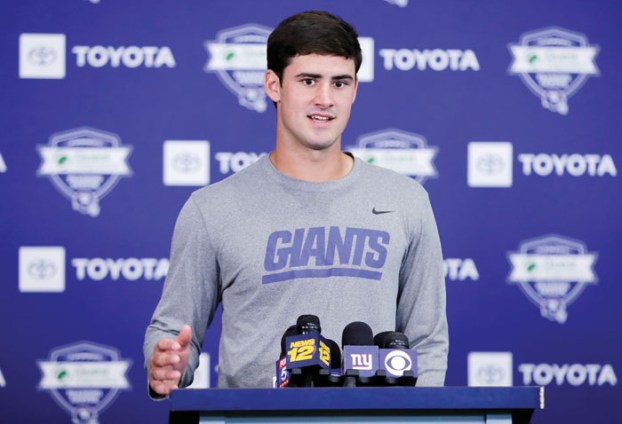 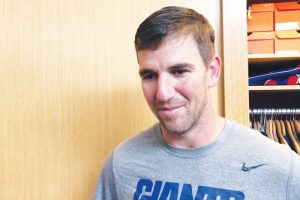 EAST RUTHERFORD, N.J. (AP) — While not happy about losing his long-time starting job, Eli Manning knew there was a distinct possibility Giants coach Pat Shurmur would make Daniel Jones the New York quarterback if the team got off to a bad start.

A resigned Manning said Wednesday he has accepted his new role as the backup quarterback and he intends to support Jones and do everything he can to help the Giants (0-2) start winning games.

For now, that’s learning how to run a scout team for the only the second time since 2004.

A humble Jones, the sixth pick overall in the draft, felt ready to take over, starting this weekend at the Tampa Bay Buccaneers.

Speaking publicly for the first time since making the change, Shurmur said he knew he was going to make it in the 24 hours after the Giants’ 28-14 loss at home to the Buffalo Bills. He said he went with his “gut” in making the change and added he delayed announcing it so he could run it past general manager Dave Gettleman and co-owner John Mara.

The focus is still on Manning, the 38-year-old two-time Super Bowl MVP who had been the Giants’ starting quarterback since the 10th game of 2004, his rookie season. He was surrounded at his locker by at least 25 members of the media and answered questions for about eight to 10 minutes.

He also showed he had not lost his sense of humor when asked if he had given any advice to the 22-year-old Jones.

“Throw it to the guys wearing the same jersey as you are,” Manning quipped, walking away.

Manning, who is going to earn $23.2million this season, said he has not thought about asking the team to waive his no-trade clause. He also said he felt the decision was made with respect for his 16 years with the team and he would not have done anything differently in the offseason if he had known he would lose the job after two games. He also said he talked with Mara after the decision was announced Tuesday.

“I didn’t know how everything was going to shake out this year,” said Manning, who led the Giants to championships after the 2007 and ‘11 seasons. “You just know when you draft a young quarterback, there is a possibility of him playing if things don’t go well. We didn’t start fast and that’s the situation we are in now.”

Manning played well in the opener against Dallas, throwing for 306 yards, a touchdown and no interceptions. The Bills limited him this past weekend and intercepted two passes.

Shurmur said Manning wasn’t the reason the Giants are 0-2. He said all three phases have not played well enough to win.

The Giants have scored 31 points and have been pitiful on third downs in the two games. The defense was horrible, giving up 63 points.

It all added up to Shurmur going to the rookie from Duke.

“I certainly feel good about how far I have come in my preparation and my progress since I got here in the spring, through camp and through these first couple weeks,” Jones said. “We’ll try to make sure we have the best week we can, and I’ll certainly do all I can to be as prepared as possible. Yeah, I feel ready and I’m certainly looking forward to the opportunity.”

Tight end Evan Engram has been impressed by Jones, who hit 29 of 34 passes in the preseason for 416 yards and two touchdowns.

“He’s made some really crazy throws in camp and made some really good plays in preseason,” Engram said. “He came out and surprised a lot of people. Obviously I liked him from Day 1. I knew he was a talented kid and was going to do a really good job for us. Now it’s real. Now it’s live, he is with the 1s. We have to put it all together for him.”

Manning will revert to being a mentor for now and being ready should Jones go down.

When asked about his future, Manning was noncommittal.

“Who knows?” he said. “Again, I’m not dying and the season’s not over, so there’s a lot to be positive about, a lot to be grateful for, so I’ve just got to accept my new role and make the best of it.”