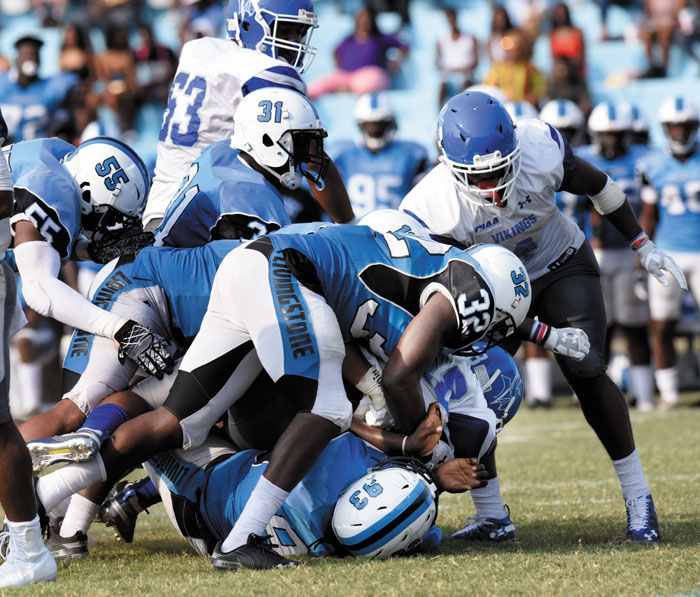 SALISBURY — Senior transfer Gibson Ziah will play just one season of football at Livingstone and he plans to make the most of it.

Ziah, a 6-2, 220-pound defensive end, who played three seasons at Guilford College in Greensboro, made possibly the biggest play in the Blue Bears’ 27-16 win over Elizabeth City State last Saturday.

With just a slim 10-3 halftime lead, Ziah sacked Vikings’ quarterback Kevin Caldwell on the first play of the third quarter, forcing a fumble in the process. The football rolled into the end zone and LC’ linebacker Ian Tyler pounced on it for a touchdown.

Suddenly, the Blue Bears led, 17-3, and that turn of events felt great to Ziah, who, after leaving Guilford and sitting out a year, is just happy to be back on the field.

“I sat out and the game I love was taken away from me, and now that I’m back in it, I not going waste any opportunities,” said Ziah, who is from Snellville, Ga., a little northeast of Atlanta. “I’m going hard every snap. When I get to the QB, I can’t even explain or describe what it feels like … the best feeling ever.”

Ziah was actually born in New Jersey but at nine years old, his mother, Dee Saunders, moved to Georgia, to get Gibson and his sister into a better environment. Ziah speaks proudly of his mother, a nursing assistant at several hospitals and in home health.

“She did what was best for us, moving to Georgia,” he said. “I missed the city life at first, because everything was close by and fast to get to. Everything is more spread out in Georgia — and around here … country living, I guess.”

Ziah stood out as a linebacker and honor student at South Gwinnett High School and then it was on to Guilford in 2014, where he earned All-Old Dominion Conference honors all three seasons. He compiled 17.5 QB sacks and over 30 tackles for losses during his career for the Quakers.

In 2017, Ziah returned to Georgia “to figure things out,” and wondered if he would ever play football again.

Finally, one of the former coaches from Guilford got in touch with Livingstone defensive coordinator Rodney Hughey. When Hughey first contacted Ziah, there was a little confusion.

“At first, I thought I heard ‘Limestone,’ which is in South Carolina, closer to home,” Ziah recalled, with a chuckle. “But Coach Hughey said, ‘no, Livingstone, in Salisbury, North Carolina.’ Once I did my research, I was real excited about Livingstone. I was just happy for the opportunity and was so excited to get here and show what I could do. And, I was going up a division (NCAA D3 to D2).”

Ziah was not eligible for the 2018 season, but his work ethic in winter workouts and spring practice got the attention of Hughey and head coach Darryl Williams. It led to his current starting position.

“I’m not that big of a guy, so speed is a given with me, but I like to show a little power too.” said Ziah, on playing defensive end. “If I see a big tackle in front of me, I have to use my speed to get him out of his comfort zone.

“Actually, some teams don’t even block me, because they’re running a play action read and want to pull me in and then throw it over my head,” continued Ziah, who once had four sacks in a game for Guilford. “But that’s when I read my key and that puts me in position to make the play.”

Like most college football players, Ziah has a dream beyond the collegiate ranks.

“I want to keep playing at the next level, but if not, I’ll use this degree (business administration) from Livingstone.”

Saturday’s win over Elizabeth City State followed the opening victory at Clark Atlanta. But Ziah said that the Blue Bears are not letting 2-0 go to their heads.

“Coach Williams reminded us that Livingstone has been in this position before,” said Ziah. “So, we’ve just go to keep on working. I feel great about where we are, but we’ve got to keep our heads down and keep things moving — one week at a time. We’re trying to show people that this is a new and exciting season at Livingstone.”

The Blue Bears host Allen University on Saturday at 4 p.m.  The Yellow Jackets are a second-year program, one that Livingstone shut out last year, 19-0.

“But they’re a totally different team this year,” Williams said, of Allen. “They have added some good players on both sides of the ball. It should be another hard-fought challenge for us.”

Allen comes in 1-0, after defeating Clark Atlanta last week, 16-10. The Yellow Jackets’ opener on Sept. 7 in Elizabeth City was postponed, due to Hurricane Dorian.

NOTE: Last week’s win over Elizabeth City State was just Livingstone’s 11th in the series with the Vikings (43 games), and first victory since 2003. … no doubt, Livingstone’s president, Dr. Jimmy R. Jenkins Sr., enjoyed the win over ECSU — his alma mater.