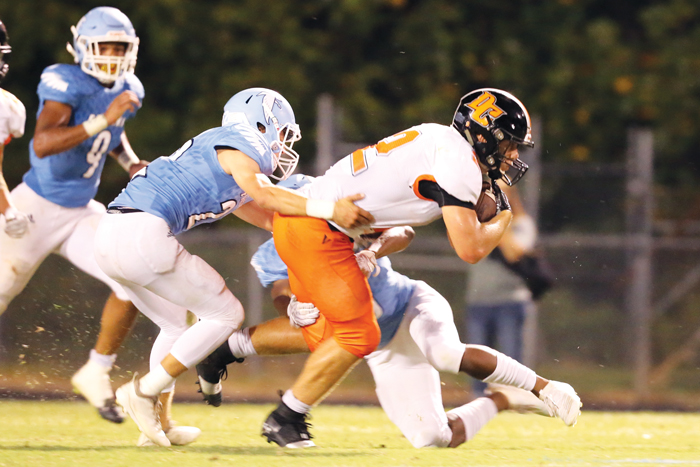 Davie County’s #2 Tate Carney makes it to the 47-yard line before being brought down from behind by West Rowan #22 Daniel Sell. ... James Sipes for the Salisbury Post 9/13/2019

In his previous two outings, Davie’s 6-foot-6, 230-pound QB Nate Hampton, who is being recruited by a lot of people, had lit up defenses for 751 passing yards and eight touchdowns.

Not only that, Hampton had been spreading it around. Wideout Jack Reynolds and back Tate Carney presented the most obvious problems, but six different War Eagles owned at least one TD catch, so there wasn’t any one guy the Falcons could try to double-team and take away.

Davie was undefeated and had outscored three highly regarded teams. Making things look even bleaker, West was coming off a five-turnover home loss against Cox Mill to fall to 1-2. West had bludgeoned Cox Mill in the first half, but hadn’t done much of anything after halftime.

“But I knew that if our kids played the way they can play, we had a chance against Davie,” West coach Joe Nixon said. “If we could be solid on the back end, we had a chance.”

The key to West’s defense against Davie was one of the guys on the back end — 180-pound safety Reggie Everhart.  He’s soft-spoken and unassuming, but a three-year starter with savvy and speed and the ability to play any of the three safety positions in West’s 4-2-5 base defense.

“One of the things we knew we had to do to try to stop Davie was show them a different look, a different coverage than what they expected from us,” Everhart said.

“We had a lot of mental reps during the week,” Everhart said. “We knew our jobs and were well-prepared.”

Nixon had concerns about Everhart’s physical health during the week. He’d gotten banged up against Cox Mill, but he didn’t miss any of the practices preparing for Davie.

“I pulled something in my leg against Cox Mill,” Everhart said. “But it wasn’t anything serious.”

Against Davie, everything fell into place for West, a two-TD underdog. Offense, defense and special teams clicked.

“A  key for us was a great pass rush from our defensive line,” Everhart said. “You can’t let that quarterback stay in the pocket, and we got some good pressure. We forced him out and made him throw on the run.”

Offensively, West did exactly what it needed to do. It kept the ball for long periods, grinding away, moving the chains with 215-pound sledgehammer Michael Gonsalves and with receiver Jalen Houston, who came into the game with negative rushing yards, playing a larger role than expected in the backfield. Out of nowhere, Houston rushed for 108 yards.

“Our blocking was great all night and we kept the ball,” Everhart said. “That was the plan. We executed it.”

With 8:54 left, West kicker Federico Cruz punched through the ninth field goal of his career. The Falcons led 24-21.

Still, when Davie’s Kristian Lyons picked off a pass and returned it to the West 43, the War Eagles were in position to pull the game out.

“We took a shot downfield, and it didn’t work out for us,” Nixon said.

With just over two minutes left, Davie faced fourth-and-7 at the West 26.  Carney was out of the game with an injury. That reduced Davie’s options.

“Well, they’d been throwing it all night, and we knew they’d throw it again,” Everhart said. “All their guys except one ran little routes into the flats, but 22 (Reynolds) was coming toward the end zone on a vertical route. That’s where the ball was going.”

Everhart’s instincts were flawless. So was his timing. He made the interception at West’s 5-yard line with 2:01 remaining.

Two more first downs by West’s offense, and the Falcons celebrated a terrific victory, one that wasn’t expected by many outside the program.

“Reggie made a big play, but he’s made a lot of plays along the way the last three years,” Nixon said. “He’s just a solid guy. He  helped us win the turnover battle (3-1), and when you win that battle, it gives you a chance against anybody.”

Cruz has been West’s Rowan kicker for four seasons and has accounted for 155 points.

Cruz had two field goals in a game for the second time in his career in West’s recent loss to Cox Mill.

Against Davie on Friday, Cruz kicked three PATS, in addition to the decisive field goal. Cruz is also handling punting duties this season.

“We’re excited for him because he worked and worked to make himself into a Shrine Bowl player,” Nixon said. “The Shrine Bowl is about more than a game and it will be a great week for Jonny. It also means a fun weekend for our program because we’ll get to go down to Spartanburg and watch him.”

The game was considered a virtual toss-up, so the loss itself wasn’t stunning, but no one expected the Wonders to lose 30-0 at home.

A.L. Brown plays at West Rowan on Friday, so Nixon was one of the people most interested in seeing that tape.

“The score wasn’t indicative of the game at all,” Nixon said. “Kannapolis had a lot of penalties and turned it over a couple of times and put their defense in bad spots, but they’re still Kannapolis. They’re still good. They’re still talented, still athletic, still well-coached. A lot of teams have played four games and they’ve only played two, and that’s a factor. But I keep telling our guys that they’re going to see a polished team, a very good team when they come in here to play us on Friday.”

Salisbury’s defense stood tall again in Friday’s 28-0 win against Thomasville in the Central Carolina Conference opener for both teams.

Nick Hall, a 280-pound sophomore, had a fierce game against Thomasville.

“He just kept swallowing up two blockers all night,” Hinson said. “That kept our linebackers free to make plays.”

WSAT radio dedicated its broadcast of the Thomasville-Salisbury game to Randy Swicegood, the UNC graduate and realtor, who found his calling as the radio voice for Davidson County high school sports for decades. He also was a frequent sports announcer for Catawba basketball. Swicegood died of cancer on Sept. 11.

Despite the shutout of Thomasville, Salisbury dropped from 9th to 10th in the AP state media poll.

Off last week, the Mustangs (2-1) have had two weeks to prepare for North Rowan’s visit on Friday.

It’s close, but East has lost more football games to North than it has to any other school.

East hasn’t beaten North since 2010 and has dropped the last six meetings to the Cavaliers.

“We haven’t played them in a while, but it’s always a high-intensity game, a high-interest game and a well-attended game,” Hampton said. “They’re pretty big and they’ve got good athletes.”

As a player, Hampton had his biggest day against the Mustangs in the 2001 regular-season finale, rushing 31 times for 259 yards and two TDs. Hampton broke West’s career rushing record in that game, although his record has been eclipsed a number of times since then.

North broke out of its offensive doldrums in Friday’s 45-10 win against Carson.

Improved offensive line play was part of it. Malcolm Wilson had his first big rushing day of the season, and Kyree Davis threw the first three TDs of his career.

North (1-3) had started the season with losses against Salisbury, West Rowan and Lexington, all tough defensive clubs.

“Salisbury just got after us,” Hampton said. “They’ve got a chance to do some big things this year.”

In a 35-0  Central Carolina Conference road win against East Davidson, South’s defense registered its first shutout since it blanked North Iredell in 2009. The Raiders went 104 games between shutouts.

South’s defense is still playing without 240-pound tackle Remington Steele, who figured to be one of the team’s standouts, but the Raiders got healthier on Friday with the return of outside linebacker Andrew Furr and free safety Gabe Poczyk from injuries. Both turned in strong games.

“We’re almost at full strength now,” South coach Daniel Yow said. “We got a great team defensive effort from everyone.”

Outside linebacker Luke Hiskey was outstanding for the Raiders, and Yow was excited about the play of freshman defensive lineman Aquiles Bernal.

Ward Bond made South’s first interception of the season.

While South (1-2) has only played three games, slot receiver Nathan Chrismon leads the county in scoring with 32 points. He has three receiving touchdowns, a rushing touchdown, a kickoff return touchdown and a 2-point conversion.

Carson expects to have Alex London, who started the first three games at quarterback, back for Friday’s game at North Stanly. He missed the North Rowan game with a concussion. He’s passed for 220 yards and three touchdowns.

Carson’s defensive effort against North Rowan was led by cornerback Mikhail Gomez, who made his first interception of the season and the Cougars’ first since opening night.

Andrew Beaver kicked his first field goal of the season.

MaxPreps stats have Hampton ranked among the state leaders in passing yards with 1,064 — 266 per game.

Davie DB Lyons made his second interception of the season against West Rowan and also is averaging 10.3 tackles per game.