SALISBURY — A man was charged with methamphetamine possession after his wife reported a disturbance at their Salisbury home.

Authorities were called to the 1000 block of Double J Lane about 5 p.m. Monday, according to a Rowan County Sheriff’s Office report. The wife told officers her husband had active warrants for his arrest on child abuse charges. 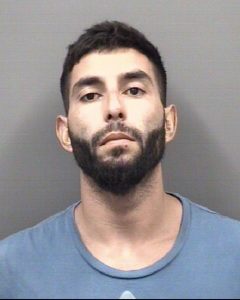 Officers reported that Alire became extremely violent and they believed he was under the influence of methamphetamines. Alire was sweating profusely and gritting his teeth, and his arms were rigid when they tried to place him in handcuffs, according to the report.

Alire told a deputy he had a syringe in his sock. The officer it as well as a white powder in a pack of cigarettes.

The deputy also found a bundle of tissue paper and a clear bag that contained meth.

Alire admitted using meth shortly before arriving at the gas station. He continued to fidget in the patrol car and hit his head on the window, the report said.

Alire remains in the Rowan County jail under a $4,000 secured bond.