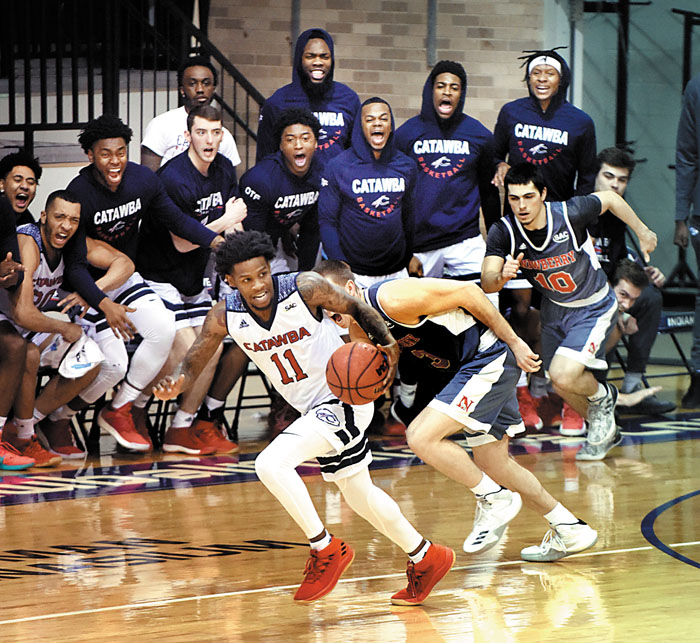 Wayne Hinshaw file photo/for the Salisbury Post ... Catawba’s Marcell Haskett (11) races the ball upcourt in front of the Indians’ bench, during a game last season against Newberry. Haskett was a key newcomer last year for Catawba and he returns to lead the team in 2019-20.

Catawba’s basketball program stopped trying to compete with Lincoln Memorial and Queens at the top level of South Atlantic Conference with kids, and made a boys-to-men transition by adding muscular, seasoned, ultra-talented transfers.

Head coach Rob Perron went into his laboratory, stirred a lot of diverse elements together and came up with a squad that managed to combine eye-popping skill with surprisingly tight chemistry.

“People attach a stigma to transfers,” Perron said. “But we brought in good guys, guys we had recruited previously, guys we’d interviewed and were confident would fit in. We had a lot of talent, but everyone was willing to take their turn. Everyone was willing to find the hot hand. Guys liked each other and liked playing with each other.”

The results were staggering.  A year after struggling to 11-15, Catawba became a top 20 team nationally in scoring (86.2 points per game), a top 25 team nationally in rebounding and steals, and a top 50 team in shooting percentage, blocking shots and forcing turnovers. Catawba made dramatic strides in a lot of measurable stuff.

Catawba went 25-8, won fierce games in the SAC tournament against rivals Wingate and Lenoir-Rhyne and took home the first championship banner claimed by the program since 2010.

While the 2019 football season is just getting started and should be a lot of fun, go ahead and brace yourself for the excitement coming to Goodman Gym this winter.

“We’ll be deeper and we should be as good or better this season,” Perron said matter-of-factly. “We’ve got new pieces. They’re exciting.”

Catawba lost key performers in Jameel Taylor (the school’s No. 4 all-time scorer), Jordan McElveen and Jeremy McLaughlin (10th all-time in blocked shots), but the Indians would have had a stout team in 2019-20 even if they had stood pat. Guards Marcell Haskett (who broke the school record for 3-pointers in a season) and Devin Cooper and forwards Malik Constantine, Daquan Lilly and Ben Zemonek are back and all five led the Indians in scoring at least once. Also back are Terrence Whitfield, who shined in big games down the stretch, and role-playing vets RJ Robinson and DJ Johnson, who have proven their value.

There’s also 6-foot-10 Ben Bowen, a developmental redshirt as a freshman last season. He wasn’t ready to help last year, but now he is.

“He’s transformed himself physically in the past year,” Perron said. “He’s a skilled big who can shoot the ball.”

Of the five newcomers entering the program, the only freshman is Josh Dupree, a 6-3 guard from Georgia. He comes to Catawba with All-State credentials. His scoring stats weren’t mind-boggling, but he led his team to the 5A state finals. He gets assists and steals.

Marcus Burwell is out of Richmond, Va. A 6-3 guard, he answers to “Slim” and is related to former Catawba star Brian Graves. He’ll have just one year at Catawba. Burwell starred at Northeastern Junior College in Oklahoma and started quite a few games last season for D-I Florida International.

Zaqwaun Matthews is a 6-4 combo guard who starred in high school at Myers Park. He has played collegiately at Chattanooga, Cape Fear Community College and D-I Sam Houston State.

Larry McLeod Jr., a 6-6 native of Sanford, is a long, explosive wing player. He played  two years at Florida junior college power Palm Beach State Community College. He committed to D-I Arkansas State but sat out last season before transferring to Catawba. Perron said McLeod may be as physically gifted as anyone who’s played for Catawba.

“He has the potential to be an elite defender,” Perron said.

Then there’s Jeffrey Prophete, a 6-2 shooting guard from Florida. In high school in Fort Lauderdale, he averaged 32 points per game, put up more than 2,000 career points and was Florida’s 8A state player of the year.

“I like the mix we have of old and new,” Perron said. “The new guys are talented. They’re bringing a lot of energy.”

Catawba managed to beat Lincoln Memorial at home last season, but it dropped three squeakers to Queens — 87-86, 91-87 and 96-93 in the season-ender in the regional on Queens’ home floor.

The Indians may have the horses to deal with just about anyone in D-II this time.

“We’ll miss Jameel Taylor because he was the heart of our team for years,” said Perron, who will be in his sixth season at the Catawba helm. “But we couldn’t be any more excited about the potential this team has. Once again, we’ll be playing with men.”

In addition to the home-and-home SAC gauntlet, the Indians are facing a challenging schedule loaded with opponents that made the D-II postseason.

It officially will start for the Indians on Nov. 8 against UNC Pembroke in a neutral-site game at Francis Marion University.