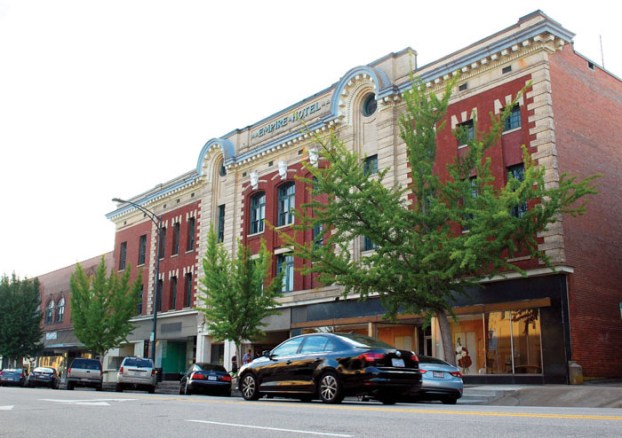 The historic Empire Hotel on Main Street is being redeveloped. Andy Mooney/Salisbury Post

The agreement doesn’t specify where the parking spots would be. Two city owned parking areas are the lot behind City Hall, at 217 S. Main St. and behind the Salisbury Business Center, at 301 S. Main St.

Along with the presentation, the Downtown Salisbury Inc. Director Larissa Harper and City Engineer Wendy Brindle said one possibility of the location of 32 spots were on the 200 block of South Lee Street where the city owns an empty lot and a lot with a home, which has been approved for demolition.

Clyde, who lives across the street from the possible lot, said he was never notified by the city about consideration of a parking lot at the house’s location and that the city’s ordinance prevents a corner lot from being a parking lot in a historic district.

Planning Director Hannah Jacobson said the 230 S. Lee St. house has been allowed to be demolished since March. But the demolition has been delayed to meet guidelines, which include creating a permanent record of the architectural features within the structure and working with the Historic Preservation Commission to try to savage any material from the house.

Harper clarified the agreement was only that the city would provide 32 spots within 900 feet of the hotel.

“It just says if the Empire Hotel moves forward, we’re making this agreement to allow the developer to get HUD financing,” Council Member Brian Miller said. “This is conditional HUD financing. It’s required. Without this, the project doesn’t happen.”

City Attorney Graham Corriher also said the agreement was only to provide the 32 spaces and they could move the location of the spaces if needed. The agreement doesn’t say where the spaces would be and doesn’t note the demolition of the house for a potential lot.

Miller says the agreement assumes the house will be demolished and be turned into a lot.

Mayor Al Heggins said it is important that the public knows where those parking spots will be.

Alexander said there is a lot of concern about the future of the lot and, if parking is being considered there, the public should be notified.

• Corriher presented language of the Nov. 5 ballot question for the separate mayoral election to the council.

It will be titled: “City of Salisbury Charter Amendment to Establish Separate Mayoral Election,” with the question stating “Shall the ordinance adopted by the Salisbury City Council August 20, 2019, which would amend the City Charter by requiring a separate election for the Office of Mayor, be approved?”

Voters will choose either “yes” or “no.”

• The council approved a rezoning from general residential to residential mixed use with a conditional district to allow for the third phase of RoMed Medical Center, at 1027 Lincolnton Road.

Multiple representatives from the Fulton Heights Neighborhood Association spoke in favor of the project and the willingness of developers to work with the residents. One resident, Andrew Pitner, said though he would like the developer to be required to connect the sidewalk on Mitchell Street, saying if someone wants to walk from Fulton Heights to the Y, on Jake Alexander Boulevard, they would have to jaywalk.

The council agreed that they couldn’t require the sidewalk to be constructed, since it isn’t on the proposed rezoning parcel. They could ask though. Brindle said the city has some money to connect sidewalks.

Miller applauded the developers for working with its neighbors to satisfy both parties, especially after previous phases of the medical center were contentious.

• The council agreed to a text amendment for the Land Development Ordinance regarding garden structures and garden features.

• The council passed parking restrictions on the 700 block of Holmes Street and the 600 block of West Kerr Street.

• Vicki Eddleman, traffic engineer coordinator for the City of Salisbury, received the proclamation for National Suicide Prevention Month. Rodney Harrison, the Transit director, and Transit staff and board members, received the Salisbury Go Transit Month proclamation. Heggins presented a proclamation for Constitution Week to a Daughters of the American Revolution representative.

• The Council recognized Catherine Garner, a development services specialist, as the North Carolina Association of Zoning Official’s Outstanding Student of the Year.