Phil Kirk, a native of Salisbury and alumnus of Catawba College, has been named a fellow of the Institute of Politics at the University of North Carolina at Chapel Hill.

Kirk is a former state legislator, cabinet member and chief of staff to two governors. 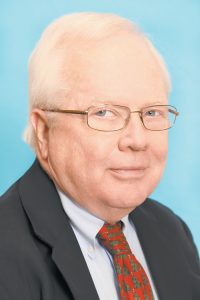 He will teach a series called  “Challenges and Changes in Politics, Government, Lobbying and Education,” drawing on his experience in the public sector. The series is a not-for-credit seminar over eight weeks for the fall semester.

“We are fortunate that so many experts in all of these areas have agreed to share their knowledge and experiences with students on the UNC campus,” Kirk said. “We hope that we will motivate students to go into the professions we represent.”

The Institute of Politics fellows program is in its third year and was created to create a dialogue between students and experienced political practitioners.

Kirk was elected to the state Senate at the age of 25 and at the time was the youngest senator in state history. He has served in a number of capacities, including chief of staff for Govs. Jim Holshouser and Jim Martin and U.S. Sen. Jim Broyhill.

Sen. Carl Ford joined fellow state senators to pass Conner’s Law, which would increase the penalty for assaulting a law enforcement officer, probation officer or parole officer with a gun.

House Bill 283 passed 46-0 in the Senate last Tuesday and is now in the House awaiting a vote.

The law is named after North Carolina Highway Patrol Trooper Kevin Conner, who was fatally shot during a traffic stop in October.

Conner’s Law will ensure that anyone who shoots a law enforcement officer will spend time in prison. The law increasing penalties for those who assault emergency personnel and cause serious bodily injury or use a deadly weapon. The bill’s primary sponsor is Brenden Jones, R-46. Jones represents Columbus County, where Conner was stationed.

The House passed the bill, 119-0, in March, but the Senate added an amendment that needs approval.

Another bill on assault with a firearm of a law enforcement officer that increased punishment was signed into law July 11.

U.S. Rep. Ted Budd, R-13, introduced a bill last week that would give businesses a tax credit if they provide virtual training.

“Almost half of employers across the U.S. have difficulties finding workers due to a lack of technical competencies,” Budd said. “Unfortunately, the popular culture has ingrained in young people that a traditional associate or bachelor’s degree is the only viable post-high school option. However, this narrative is severely flawed, and this widespread notion, as well as the lack of diversity in alternative learning options, is part of the reason why there are nearly 7 million unfilled jobs in our country today.”

Budd said apprenticeship programs that train youths in industry-specific technical skills should be part of the education system. The virtual training would allow those who don’t live near an education facility to still receive such training.

The act would give businesses as much as a $2,500 tax credit if they provide virtual training.

“I introduced this bill with the hope of incentivizing businesses to invest in the recruitment and training of a stronger and more competent workforce for future generations,” Budd said. “By offering a tax credit to employers who invest in the funding of virtual apprenticeship programs, more diverse learning options will be available to students from all backgrounds.”

The bill was referred to the House Ways and Means Committee on Wednesday.