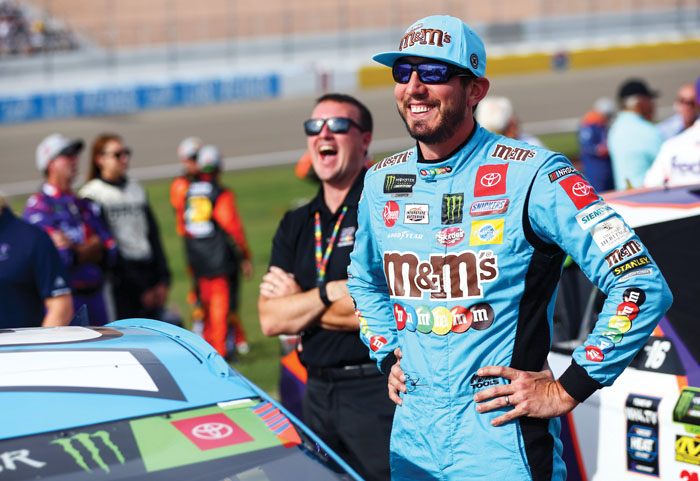 The massive divide between NASCAR’s heavyweights and the underdog teams just scraping by received renewed attention following Kyle Busch’s damning assessment of how backmarkers raced in the playoff opener over the weekend.

Busch rallied from an early incident at Las Vegas Motor Speedway that dropped him two laps off the pace to stunningly position himself for a top-five finish. Instead, he ran into the back of Garrett Smithley, who was 12 laps down in 35th place.

Busch, the regular-season champion, dropped to a 19th-place finish and went from first to fourth in the playoff standings. Clearly aggravated after Sunday’s race, he was blunt about the incident with Smithley, who was among 23 drivers on the track that day who are not in the 16-driver playoff field.

The comments have drawn sharp criticism, with some saying they came off as entitled simply because another driver didn’t get out of Busch’s way. Some responses came from some lesser-known drivers on underfunded teams and helped spark a debate over on-track etiquette during the playoffs.

Tommy Joe Martins, an Xfinity Series driver when he can piece together a deal to get in a non-competitive car, on Tuesday supported “my friend” Smithley and called him a “really good racecar driver.”

“This fear for any of us driving for a small team: become a controversy,” Martins posted on Twitter. “We all just want to race & be respected. Stuff like this proves how bitter the divide is between 2 sides of this garage. It’s depressing to me.”

Smithley will be Rick Ware Racing’s driver for Saturday night’s race at Richmond Raceway, the second event in NASCAR’s 10-race playoff series. It will be his 13th career Cup Series start; he has one top-five finish in 133 starts across the Xfinity and Truck series.

Busch has always driven for one of NASCAR’s top teams. His break in the Cup Series came with Hendrick Motorsports and he was then hired at Joe Gibbs Racing, which has won 14 of 27 races this season and placed all four of its drivers in the playoff field. Busch has 207 victories across NASCAR’s three national series and won the 2015 Cup championship.

His criticism of the smaller teams and the drivers trying to claw their way up to Busch’s level prompted a lengthy rebuke from Smithley.

He noted that, unlike Busch, who followed his older brother, Kurt, into a ride at NASCAR’s top level, Smithley “didn’t grow up in a racing family, and we certainly didn’t have the funds to race. The only race car my parents ever bought was a used Bandolaro race car when I was 15. I didn’t think I had a chance starting that late.”

Smithley said he won enough races that a local golf cart shop owner stepped in as a sponsor, bought him a Legends car and helped Smithley move up to touring level. Then he decided to relocate to North Carolina, the hub of NASCAR, and try to make it in the big leagues.

“When I decided to move to Charlotte to pursue a career as a professional driver there is no doubt I had to basically give up the chance to win races in order to ‘fund’ getting the opportunity to race,” he continued.  “I am one of only a handful of drivers that actually has never spent any of my own money to race. So spending money to go win in a late model was never an option, because the only way I can afford to race is if someone else pays for it.”

Smithley said he sells his own sponsorship, which he then brings to a team in order to secure seat time. He said most companies and sponsors prefer to back “someone like Kyle” to get the marketing value they want.

“Nobody that is considered ‘in the way’ wants to be,” he wrote of the incident with Busch. “We are simply doing the best we can” and “I do think I can be competitive in the right equipment and I will even go a step further and say, with time and equal funding my teams with Rick Ware Racing, Johnny Davis Motorsports can be competitive, too.”

NASCAR is attempting to address the current model and financial distributions, and team owners such as Bob Leavine of Leavine Family Racing have repeatedly said they believe a balance can be struck between the wealthy front end of the garage and the small teams in the back that spend each week short on tires, parts, personnel and everything else needed to be competitive.

Any solution will not come quickly.

Joey Gase penned a similar tale of his struggle to make it in NASCAR. Gase and Smithley were both running near each other when Busch ran into Smithley. Gase’s post included photos from late model races he won, noted he needed outside financial support to continue his career because his father worked in a coal power plant and his mother was a hairstylist and couldn’t afford for Gase to race as his childhood sport.

“We have to work for every sponsor we get and I am proud to say I have 30 different sponsors this year and would not be here without them,” Gase wrote.