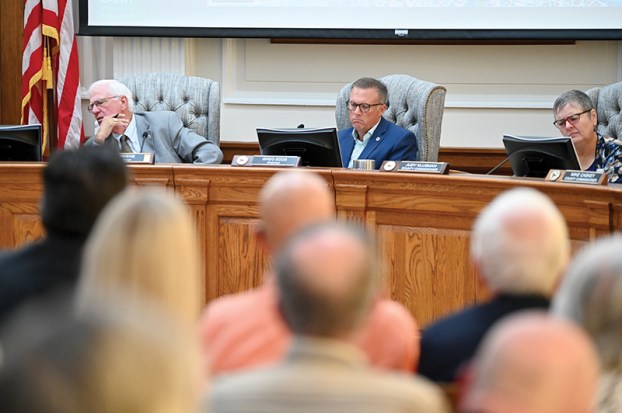 SALISBURY — The owner of land where a large solar farm is planned in western Rowan County says he plans to live in the middle of the development once it’s built.

Harry Welch Jr., who now lives on the land, told the Rowan County commissioners late Monday night that he plans to continue doing so with his wife and dogs if the solar farm comes to fruition.

Welch, a businessman who worked in the radio industry and served as register of deeds, hopes to see development of a 65-megawatt solar farm on 428 acres along Neel Road, Sherrills Ford Road and Old Bradshaw Road. The solar farm would represent a $70 million investment.

It would be the largest such development in Rowan County and require a conditional-use permit from the county commissioners before construction could start.

The proposal brought out a standing-room-only crowd to Monday’s commissioners meeting, which lasted until about 10:30 p.m., with only a few of the dozens of people able to speak because of a lengthy presentation given by the applicant — China Grove Solar LLC. With much left to discuss, the commissioners tabled a vote on the matter until 6 p.m. Oct. 21, their next meeting.

Welch was the final member of the applicant’s team to speak. Others included the development company, Durham-based Cooperative Solar, attorneys, an engineer and a real estate agent.

Welch said his ownership of the land is connected to the estate left by his father, Harry Welch Sr. The younger Welch said he was tasked by his mother with finding a use for the property.

“And I have been working real hard to do that,” he said.

At one point, he attempted to build a golf course on the property, but that plan didn’t work out. Now, Welch says, he’s satisfied with the solar farm proposal.

“You have to realize that I’m living in the middle and I’m right down from where the substation is,” Welch said.

Prompted by attorney Tom Terrell, who was representing the solar farm developer, Welch said that he had eventually planned to cut down the many acres of trees that are part of the solar farm property and sell the lumber.

Whether they have permission or not, Welch said, he hears people hunting on his property at all hours of the day, and he would like the “peace and quiet” brought by the solar farm.

The few members of the public who spoke Monday were asked to keep their questions and comments directed toward issues discussed by an engineer and real estate agent working on the project.

Those questions, among other things, ranged from exactly how distances from solar panels would be measured, how the development might affect TV and internet service at nearby homes, and water drainage during and after construction.

Representatives of the project said that distances from solar panels would be a minimum of 125 feet and that the measurement is from the solar panels to the structure, not the development’s property line. The panels should not affect TV and internet, the said, and the developers will create an erosion and sedimentation control plan that meets N.C. Department of Environmental Quality and local standards.

The commissioners also continued to pepper people associated with the development with questions late into the night.

Chairman Greg Edds asked the developers to clarify how much of the project could be taxed. The answer, because of state laws, was 20% of the $70 million to be invested.

The commissioners recessed their public hearing on the solar farm’s conditional-use permit, saying that members of the public would have the opportunity to speak Oct. 21. County Attorney Jay Dees said the public should wait until that meeting to provide commissioners with additional information about the matter because the county’s consideration of the permit is a quasi-judicial hearing.

Commissioner Craig Pierce asked that the county make the solar farm development the first item on the Oct. 21 agenda.