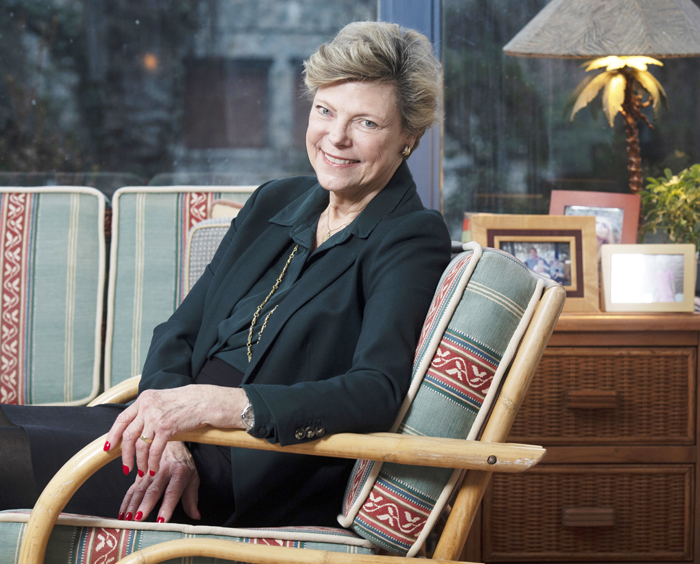 Journalist and author Cokie Roberts in her home in Bethesda, Md., in February. Marvin Joseph/Washington Post

Cokie Roberts, a daughter of politicians who went on to become a prominent journalist and political commentator, winning three Emmy Awards during a long career with NPR and ABC News, died Tuesday in Washington.

Roberts was inducted into the Broadcasting and Cable Hall of Fame and named a “living legend” by the Library of Congress in 2008.

A rare woman in the newsroom when she began her career in the mid-1960s, she worked at CBS News, NPR and PBS before joining ABC News in 1988.

A veteran congressional reporter and consummate Washington insider, she co-anchored the Sunday political show “This Week” with Sam Donaldson from 1996 to 2002, when she was diagnosed with breast cancer.

She also wrote eight books, including several bestsellers, and wrote a political column while developing a reputation as a mentor and champion of young women in the media.

In part, her Washington expertise was a result of her upbringing. Her father, Hale Boggs, was Democratic majority leader in the U.S. House, and her mother, Lindy Boggs, launched her own congressional career after he died in a 1972 plane crash.

“I’m the only person in my original nuclear family who didn’t run for Congress,” Roberts told The Washington Post earlier this year. “I have always felt semi-guilty about it. But I’ve sort of assuaged my guilt by writing about it and feeling like I’m educating people about the government and how to be good voters and good citizens.”

She was born Mary Martha Corinne Morrison Claiborne Boggs on Dec. 27, 1943, and said her brother Tommy nicknamed her Cokie because he couldn’t pronounce Corinne.

Her father, Thomas Hale Boggs Sr., was elected from Louisiana to the House in 1940. He lost a re-election bid but returned to office in 1947, leading Cokie to spend much of her childhood in Washington, roaming the congressional hallways and joining her parents at parties.

Her mother, the former Lindy Claiborne, won the special election for his seat after his plane disappeared in Alaska. She served nine terms in Congress. President Bill Clinton later appointed her U.S. ambassador to the Holy See at the Vatican.

Roberts received a bachelor’s degree from Wellesley College in political science in 1964.

Her early journalism jobs included hosting a public affairs program at Washington television station WRC-TV and reporting overseas for CBS News on the radio. She covered Capitol Hill for the fledgling radio broadcaster NPR beginning in the late 1970s, then served as congressional correspondent for more than a decade while contributing to “The MacNeil/Lehrer NewsHour” on PBS.

Until her death, she was a part-time political commentator for NPR.

Before joining “This Week” at ABC, Roberts was a political correspondent for the network’s “World News Tonight” program and filled in for Ted Koppel on “Nightline.”

Roberts married journalist Steven Roberts in 1966, in a ceremony attended by President Lyndon Johnson and his wife, Lady Bird.

In addition to her husband, of Bethesda, Maryland, survivors include two children, Lee Roberts of Raleigh, North Carolina, and Rebecca Roberts of Washington, and six grandchildren.