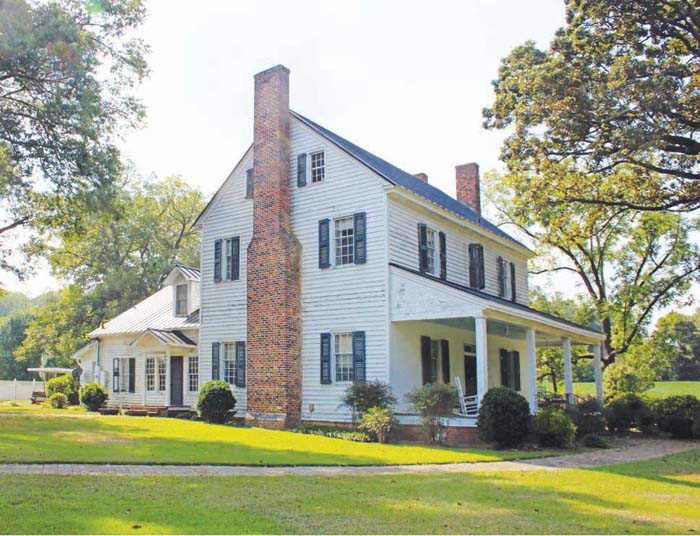 This is an exterior view of the 1822 Mount Vernon house off Cool Springs Road near Woodleaf. Photo courtesy of Historic Landmarks Commission

WOODLEAF — The Rowan County Landmark Commission has added the property known as  Mount Vernon to the list of Rowan County landmark properties.

Members of the Current family on hand for the presentation at Mount Vernon included Ruth, Richard, Lee, Madelyn and Andy Current.

The property is one of the best preserved and most intact of Rowan County’s Federal plantation seats.

Mount Vernon, located along Cool Springs Road, was built for Jacob Krider about 1822. The landmark designation includes the exterior of the residence, the barn and the smokehouse.

“The house has local significance in the area of architecture being an important example of a Federal plantation seat, and that it embodies the distinctive characteristics of the Federal style in Western North Carolina, distinguished by its well-executed brickwork on the double pent chimney and exterior woodwork.”

The property received a National Register of Historic Places designation in 1980.

Krider, founder of the Western Carolinian newspaper, was a prominent planter and active in politics and the social life of his community.

The residence quickly became a popular gathering place, and it served as the post office for the vicinity. Krider’s widow, Sarah Wood Krider, lived in the house until the death of her son, Charles C. Krider, in 1891.

Charles Krider served as sheriff of Rowan County from 1880 to 1890.

The property was sold to Emory N. Teague in 1892. Teague was appointed postmaster for the Mount Vernon Post Office in 1898. He served as postmaster until 1904, when rural free delivery was initiated.

Teague and his brother-in-law, Richard Carmi Current, continued the milling operations started by the Krider family. The mill was known as the Mount Vernon Roller Flouring Mill.

The property is still owned by descendants of Richard Carmi Current.

The mission of the Landmark Commission is to identify and inventory properties in the county having historical, pre-historical, architectural and cultural significance and make recommendations to the Rowan County Board of Commissioners about sites, areas, structures and objects to be designated as historic landmarks.

Reports on all those properties can be seen at the county website, rowancountync.gov, on the Planning and Development Department page.