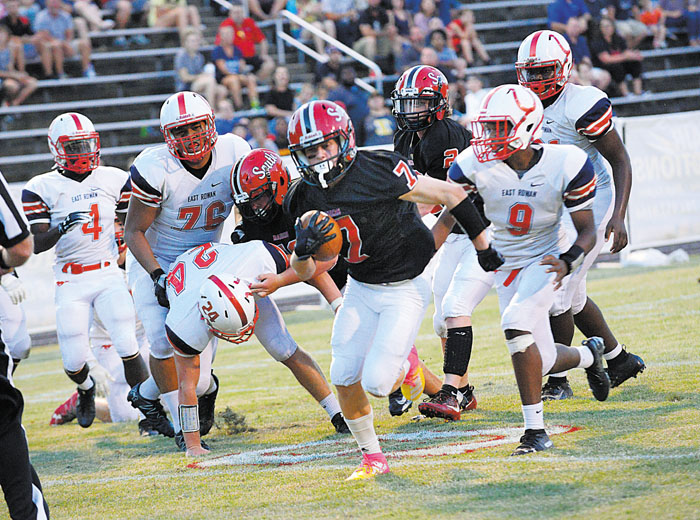 “There have been a lot of jokes about that,” Chrismon said, sheepishly.

The “Flu Game” reference dates back to June 11, 1997, years before Chrismon was born.

Game 5 of the NBA finals. The Chicago Bulls led by Michael Jordan and Scottie Pippen on the road in Salt Lake City against the Utah Jazz led by Karl Malone and John Stockton. With the series even at two games apiece, Jordan got desperately ill the night before Game 5. Maybe it was a flu bug or maybe it was a bad case of food poisoning. Either way, he was suffering, clearly under the weather and not himself as the Bulls fell behind by 13 points in the first quarter. But then Jordan scored 17 in the second quarter to get Chicago back in the game. He had another run in the fourth quarter as the Bulls pulled it out.  The rest is history. Pippen carried a limp, rag-doll Jordan off the floor after a 90-88 victory that added another chapter to Jordan’s legend.

Chrismon, son of  UNC parents (South baseball coach Thad and South AD Angie), brother of a Tar Heel football player (Austin) and one of the biggest UNC fans in the world, knows everything there is to know about Jordan.

Chrismon spent Friday trying to stay positive, but he felt lousy. He felt like he’d been run over by a bus, but he was determined to play.

“It was a tough day, but nothing that serious as far as symptoms,” Chrismon said. “Pretty bad cough. Stuffy nose.”

Chrismon is only 5-foot-8, 150 pounds, but he is quick when he’s healthy, and apparently even when he isn’t.

A shortstop and leadoff hitter, in 2018, he stole 44 bases and scored 67 runs for a South Charlotte Panthers team that won a world championship. Last spring, as a freshman playing on the varsity, he led Rowan County baseball with 21 stolen bases.

“He’s very fast in a straight line, but he also can really move side to side,” Yow said. “He’s shifty.”

South coaches already had decided not to use the under-the-weather Chrismon at all on defense on Friday — he normally plays some at safety — to try to get him through the game in one piece.

“We wanted to lighten his load,” South head coach Daniel Yow said. “You know he’s going to play every snap on offense at slot receiver and he’s on all our special teams. He’s a gunner on punt coverage and the return man on punts and kickoffs.”

The first half was the expected struggle between 0-2 teams trying desperately to win their opening Central Carolina Conference game. The Raiders finally broke the ice with 11 seconds left in the first half on a 30-yard touchdown pass from Drew Huffman to Austin Peacock.

Chrismon’s largest contribution in the first half was a 67-yard punt return to the East Davidson 8-yard line, but the Raiders couldn’t punch it in and missed a field-goal attempt.

“On the long punt return, I just a saw a hole and cut it up the gut,” Chrismon said. “It wasn’t one of those things you can practice. I was just trying to make something happen. I really should have scored on that play, but I kind of tripped myself up at the end of it.”

Chrismon would make up for it on the second-half kickoff. He accepted the kickoff  and sprinted 87 yards for a touchdown and a 14-0 lead.

“It just happened,” Chrismon said. “A lot of great blocks by teammates got me free, I made a few guys miss, and I was able to score. That return kind of sparked us for the whole second half.”

South definitely was sparked. The Raiders dominated the second half, offensively and defensively, posting their first defensive shutout since 2009.

Chrismon scored his second touchdown on a 22-yard running play in the middle of the third quarter to make it 21-0.

“It was a jet sweep, and I cut up behind my blockers and then ran past the safety,” Chrismon said.

As far as margin of victory, 35-0 was the most lopsided triumph for South since the Raiders demolished Statesville 76-22 late in the 2009 season.

South hasn’t won more than three games in any season since the 9-3 campaign of 2009, but maybe this is the year.

South’s success means as much to Chrismon as it does to any of the Raiders. His late grandfather, Larry Deal, guided South to 70 victories as head football coach from 1983-1994 and made enormous contributions beyond that as an AD, football assistant, track and field coach and basketball coach.

“That’s all very important to me and it’s a big part of me,” Chrismon said. “There’s a great legacy because my grandpa meant so much not only to South Rowan football but to the entire school. My brother, Austin, did a great job of carrying on that tradition when he was here, and now (first cousin) Jackson Deal and I want to do the same thing.”

Chrismon’s future probably will be in baseball, but Yow is thrilled to have him using his wheels to make big plays for the football team.

“It will be a while before he has to decide to choose a sport and we don’t know yet how much he’s going to grow,” Yow said. “We’re just happy he’s playing two sports and helping both teams. It’s a great situation when one of your most dynamic players is also one of the best kids in your school in the hallways. He knows who he is, what his family has done, and what his responsibilities are. You know he’s going to make good grades. You know he’s never going to be any trouble.”