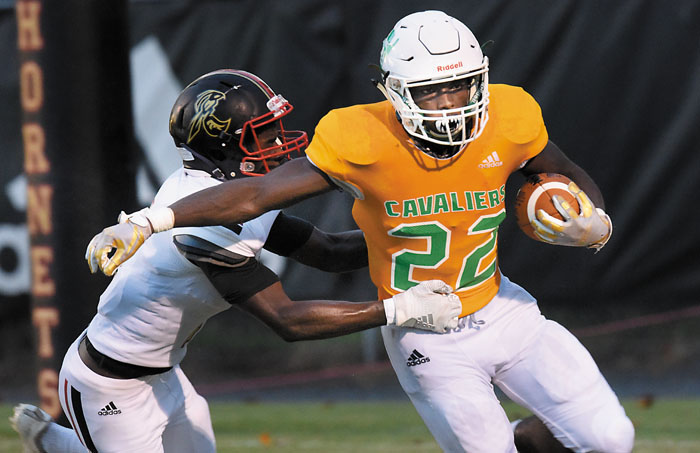 “Salisbury’s defense just got after us, and that was a scary blow Malcolm took on the sideline in the middle of the second quarter,” North coach Ben Hampton explained. “Malcolm is a tough guy. He wouldn’t tell me he was hurt even if he was hurting, but that was a shot he took. It might have slowed him down some.”

While he never complained, Wilson, the county’s reigning rushing champ and the 2018 Rowan County Offensive Player of the Year,  was a shadow of himself in the early going. He had only 126 yards on 54 carries in North’s first three games — losses to Salisbury, West Rowan and Lexington.

While Salisbury’s defense was fast and physical, West Rowan’s defense was even bigger and almost as quick. Lexington was also defensive-minded, and had the athletes to match up with the Cavaliers.

“The bottom line was we didn’t execute at all on offense in our first three games,” Hampton said. “Malcolm had a heck of a season last year, and when you have a season like that people are going to try to stop you and are going to game-plan to stop you. He wasn’t experiencing a lot of success. So we did challenge him several times before the Carson game to be that old No. 22 that we needed, to get the ball downhill for us, to get north quickly instead of going east and west so much.”

In North Rowan’s 45-10 win against Carson at Eagle Stadium, Wilson rushed 26 times for 216 yards. He scored his — and the team’s — first two rushing touchdowns of the season on runs of 20 and 11 yards and added a receiving touchdown and a 2-point conversion.

“I think I was OK  and just needed a little time to rest,” Wilson said. “Against Carson, I got back to running through tackles, and that’s how I got most of my yards last year. In those early games, I’d been trying to get outside and make a big play every time. I was just trying too hard to do too much. On Friday, I got back to being happy with those tough yards inside.”

He got back to being that guy who averaged 9 yards per carry last season, not that guy who was dancing around and being stuffed by Salisbury and West Rowan.

“He turned it on,” Hampton said.

While he was credited with a touchdown on a screen pass that he toted 23 yards, Wilson had a second receiving touchdown erased by a flag for a block in the back when the Cavaliers ran the same play.

He’s a running back who catches the ball like a receiver and he has such quick feet that he can get open every time.

That TD on the screen was his 40th career reception.

“Malcolm has great hands,” Hampton said. “He can really catch it, and we’ve got to use that ability.”

Friday’s breakout game boosted Wilson’s career rushing total to 2,685 yards. He’s on his way to being the fifth North back to reach 3,000 career rushing yards. JaReke Chambers, Wilson’s former teammate Jaleel Webster, Mark Sturgis and Darryl Jackson — all county players of the year — are the others to reach that milestone.

A major factor in Wilson getting back on track and scoring the 36th, 37th and 38th touchdowns of his career was the season debut of 310-pound senior center Kendall Reid.

“Everybody notices the skill guys, but they take those linemen for granted,” Hampton said. “But when Kendall was out those first three games, it was pretty evident that we didn’t have him. He was really good for his first game back. We had no idea he’d be able to do the things he did.”

Wilson is a lead-by-actions athlete, not a vocal guy, so Reid’s return meant a lot to reviving the offense.

“Kendall does a lot of talking upfront and makes sure everyone knows their blocking assignments,” Wilson said.

Wilson also benefited from the three touchdown passes that quarterback Kyree Sims, who hadn’t taken a varsity snap prior to this season, threw on Friday. Those were the first three TD passes of Sims’ career.

“Hitting those passes was good for his confidence and being able to pass will loosen defenses up,” Wilson said.

North’s next test will be an interesting one. The Cavaliers (1-3) are at East Rowan (2-1) on Friday and while the programs squared off in the 2018 Rowan County Jamboree they haven’t met in an actual game since opening night in 2016 when the Cavaliers won 28-14.

North’s success in Granite Quarry — or lack thereof — will depend largely on whether or not Wilson keeps rolling.

“The plan is for Malcolm to get 30 touches no matter who our opponent is,” Hampton said. “If we keep pounding the ball with him, he’ll turn some short gains into big ones.”