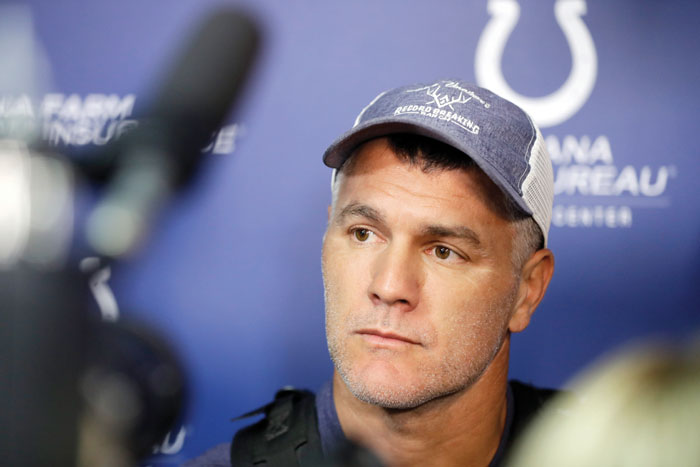 The rumored retirement apparently was never under consideration.

In his first public comments since leaving the stadium Sunday, the NFL’s career scoring leader explained he misspoke when saying he would answer questions on the players’ normal day off — a comment that drove speculation about Vinatieri’s possible NFL exit.

“That was one of those situations where I was walking out of the locker room and you guys were talking to me and to be quite frank, for two decades we’ve always had open locker rooms on a Monday. Granted, our schedule has changed now, as of last year,” Vinatieri said.

“When I walked out and said ‘I’ll talk to you guys on Monday,’ I just needed a little bit more time and none of us should assume stuff.”

It’s certainly been an unusual stretch for the 46-year-old kicker.

He missed part of training camp and part of the preseason with knee tendinitis in his plant leg. Then he missed two field goals and an extra point — a career first — in a season-opening overtime loss to the Los Angeles Chargers and two more extra points in Sunday’s 19-17 victory at Tennessee.

Vinatieri has made only 3 of 8 kicks to open the season, has already matched a career high for extra points missed in a single season. He’s also missed an extra point in three straight games and four of the past five, including two playoff games last season.

Team owner Jim Irsay acknowledged Sunday the misses have become a “concern,” and now fans are openly debating whether Father Time has finally caught up to the seemingly ageless Vinatieri, who was long ago dubbed the best clutch kicker in NFL history.

His teammates are still believers.

“People are like ‘He’s missing, he’s missing,’ and I’m like, ‘Man, he’s the GOAT,’” linebacker Anthony Walker said. “I expect him to make every kick from here on out.”

If he can, it certainly would ease some of the angst in Indy (1-1) less than three weeks after Andrew Luck’s sudden retirement.

Some thought if Vinatieri didn’t retire, he might get cut by the Colts. Or he could spend the rest of the season on injured reserve. He dealt with a lingering groin injury much of last season and is still receiving treatment on his sore left knee.

But Vinatieri blames only himself for the errant kicks.

“You all know I went through some stuff earlier, I feel fine,” he said. “You don’t reinvent the wheel, you just rely on what you’ve done in the past.”

Coach Frank Reich reiterated Monday that he had complete faith in Vinatieri and expects him to kick — and kick well — in Sunday’s home opener against Atlanta (1-1).

“There’s nobody else I’d trust more than I would trust Adam Vinatieri,” Reich said. “It doesn’t mean he’s going to make every kick. I mean, shoot he’s human. The greatest players at every position still make mistakes, they still throw interceptions — we’re all human. But still no one I trust more.”

And why wouldn’t he given Vinatieri’s virtually spotless resume?

In addition to being the league’s career scoring leader (2,605 points), he’s also the career leader in field goals (583), participated in a league-record 216 regular-season wins and made some of the most memorable kicks in NFL history, including two Super Bowl winners.

So after flying back Sunday night and quietly sitting around a fire with his wife, Vinatieri turned the page on perhaps the worst two-game slump of his career, walked back into the team complex Monday, met with Reich and left without saying a word.

When he returned Tuesday, Vinatieri apologized for misspeaking and reiterated his commitment to finding a solution.

“I guess, like golf, if you’re out there and you hook a couple of balls you’re thinking about it till you get it figured it out,” he said. “I’ll get it figured out.”