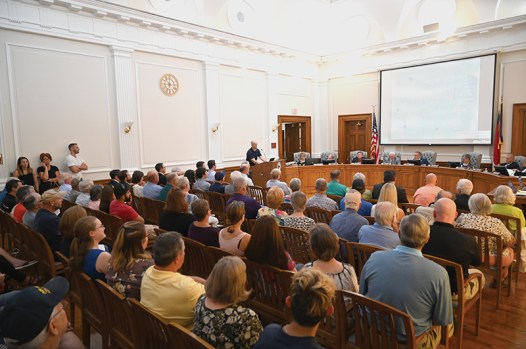 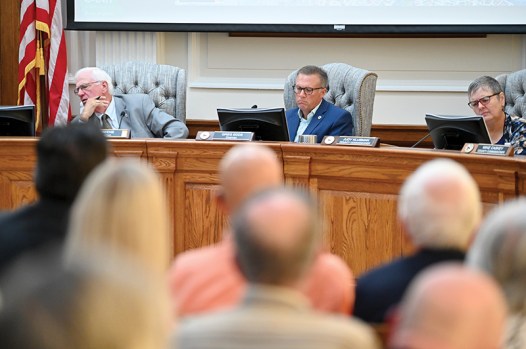 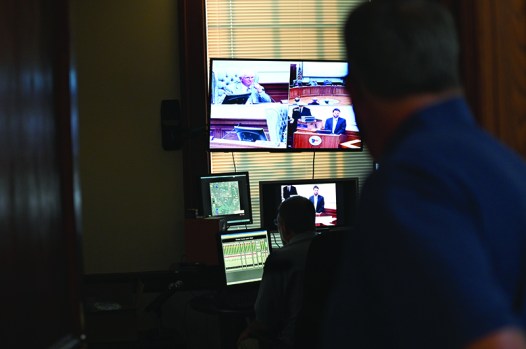 With a standing-room-only crowd at Monday’s commissioners meeting, some people watched the meeting by looking in an open door to the control room for cameras and audio. Josh Bergeron/Salisbury Post 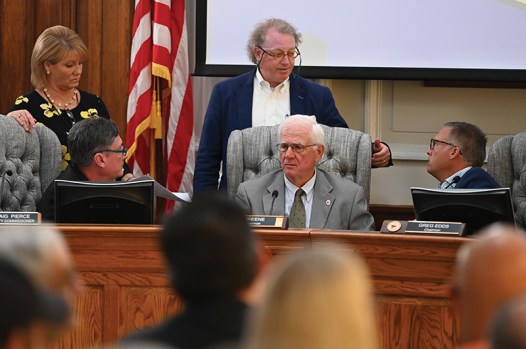 SALISBURY — The Rowan County commissioners began consideration of a plan for a 428-acre solar farm before a standing-room-only crowd at a public hearing Monday night.

China Grove Solar LLC has proposed a 428-acre solar farm along Neel Road, Sherills Ford Road and Old Bradshaw Road. The facility would bring about $70 million in investment, said Latham Grimes, a developer for the project. Not all of that amount would be taxable.

China Grove Solar is seeking a conditional-use permit to allow for the solar farm on land that is primarily zoned rural agricultural. As the meeting was still going on late Monday night, commissioners said they planned to delay a vote on the matter until their October 21 meeting. A presentation from the applicant, China Grove Solar LLC, lasted more than three hours.

At 9 p.m., no members of the public had spoken. But they turned out in force, with the commissioners’ meeting room filled to its 99-person capacity and a few dozen other people standing outside, some of whom stayed to watch the meeting on TV screens elsewhere in the Rowan County Administration Building.

“The board will render one of the following three decisions: to approve the permit as requested or with additional conditions; to continue the request; or to deny the request,” Chairman Greg Edds said before the presentation. 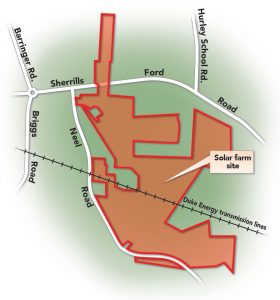 Grimes said the project is larger than most what residents typically see in Rowan County.

The 12 previous solar energy developments considered under the conditional-use process have ranged in size from 1.3 to 6.9 megawatts of power output. This one is estimated to produce 65 megawatts.

Because of the level of power generation proposed, the plans include construction of an on-site power substation near Neel Road and interconnection with an existing Duke Energy transmission line that extends east to west through the southern half of the site.

Design plans proposed a tracking system in which the panels would rotate from east to west to increase direct exposure of the sun but may also incorporate a fixed tilt.

Shane Stewart, assistant planning director for Rowan County, presented photos of the location. The photos showed the current state of the land and nearby residential properties. Maps were presented to show exactly where the solar farm would be.

“What control do we have in this, if we approve this?” Edds asked during Stewart’s presentation.

Edds also posed questions to Richard Kirkland, of Kirkland Appraisals of Raleigh, who represented China Grove Solar at the meeting. Kirkland said the project would have no impact on adjoining property values. And Edds challenged that assertion, referencing past presentations in other communities made by Kirkland that had the same determination.

Company representatives also addressed the decommissioning and safety of the solar panels, as well as detailed health and safety impacts of solar panels and solar farms.

Plans indicate that the project will encompass all developable acres, excluding any environmentally sensitive areas, rights of way, areas where one has legal right to use another’s land for a limited purpose, and areas of “volunteered” setbacks beyond the minimum 50 feet.

Commissioners posed questions about what type of experience engineers and representatives of behalf of the solar farm have, whether the project will be fenced, the structure of the solar panels, which residents have received notification of the plans and whether vegetation and trees will be preserved.

“How many acres of trees will you have to tear down?” Commissioner Mike Caskey asked Grimes.

Grimes said about 200 acres of trees would have to be removed.

Commissioner Craig Pierce addressed concerns about how the solar panels would change the view from nearby homes.

“Mr. Kirkland, I’m not saying that you’re not doing your job, but you’re not from Rowan County,” Pierce said. “And the area that you’re talking about putting this solar farm has some of the most prestigious neighborhoods in the county.”

Mechanical engineer Thomas Cleveland spoke on behalf of China Grove Solar to address topics such as the expected life span of the solar panels. According to Cleveland, the normal life cycle of each panel is 25 to 30 years, and they often last for 35 years.

The panels themselves have a 25-year warranty, said Cleveland.

The solar farm would be on three parcels of land and would be able to power thousands of homes.

Members of the public have expressed concerns about the proposal to the Rowan County Planning Office, and some have requested a 90-day delay in considering the project.

The project is expected to take about six months to complete.

• A public hearing to consider dissolving the personnel commission was held.

Items on the consent agenda included:

• Authorizing the county manager to enter into contract with Gilbert Engineering Co. for the Chewy sewer project.