Truex races into 2nd round with win in opening playoff race 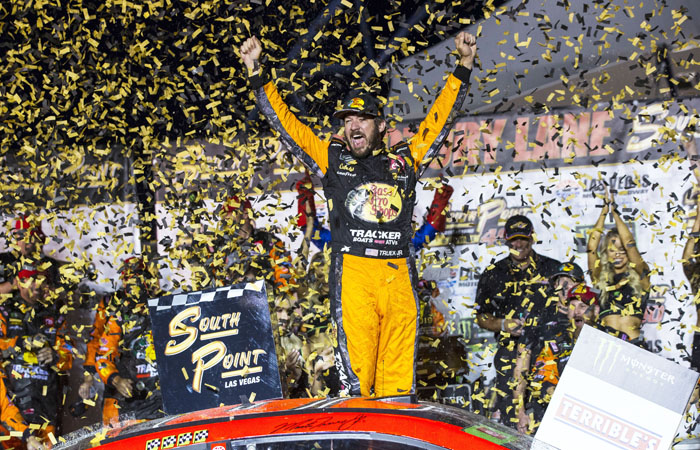 LAS VEGAS (AP) — Martin Truex Jr. clearly had one of the best teams this season as he rolled to four victories before the end of June.
Then he hit a slump of sports, nearly three months without a win, but his Joe Gibbs Racing team remained confident it would challenge for the championship.
A win in the opening race of NASCAR’s playoffs solidified their beliefs.
Truex won for the fifth time this season Sunday at Las Vegas Motor Speedway and earned an automatic berth into the second round of the playoffs. He’s won the playoff opener in three of the last four seasons, including 2017 when he won the Cup title.
“Welcome back,” Truex screamed to his team over his radio as he crossed the finish line. He later added “I feel awesome” about his chances to make the final four and race for the championship in the November finale at Homestead-Miami Speedway.
“If we can get to Homestead, we are going to be tough to handle. But we’ve got to get there first,” he said.
The Truex victory on an up-and-down day for Joe Gibbs Racing still cemented the Toyota team as the organization to beat for the Cup in this 10-race playoff series. JGR has 14 wins this season through 27 races.
Truex chased down Kevin Harvick, who was slowed by traffic, to cut into Harvick’s lead and eventually make the pass for the win — and the automatic second-round spot — on the outside with 20 laps remaining.
“I was able to hustle the car there at the end and get the lead and drive away,” Truex said. “These next two weeks are all about bonus points. This is big today to get six (points). Those are really important to get to (the finale).”
Las Vegas was a brutal opener for a handful of title contenders, including Kurt Busch, who crashed when his tire went flat and he finished last in the field. Erik Jones had an earlier mechanical issue and finished four spots higher in 36th.
The top 10 finishers were all playoff contenders as Truex was followed by Harvick, Brad Keselowski, Chase Elliott, Ryan Blaney, Alex Bowman, William Byron, Kyle Larson, reigning series champion Joey Logano and Ryan Newman.
Harvick credited his Stewart-Haas Racing team with making massive gains all weekend to get him to a second-place finish.
“We were way off when we got here this weekend. They just kept working. We qualified well,” Harvick said. “I knew the Gibbs cars would be tough. Martin was just so much better on the second half of the run. He made up that ground there, was able to stay close enough to us. My car started to get loose and push the front. It was just in kind of a four wheel drift. We really had OK speed at the first stage, but I still felt like the Gibbs cars were better than us.”
Kyle Busch hit the wall just five laps into the race and dropped two laps off the pace while his car was repaired. The regular-season champion finished 18th but was on track to finish fourth until he ran into the lapped car of Garrett Smithley nearing the end of the race.
“We are the top echelon in motorsports and we’ve got guys out here who have never won late model races, it’s pathetic. They don’t know where to go,” Kyle Busch said. Smithley has 11 career Cup starts, but has never won a race in a national series, including ARCA.
Busch in later post-race interviews repeated several times “I’m just here so I don’t get fined,” — a nod to celebrity pace car driver Marshawn Lynch, who used that line throughout his NFL career.
Pole-sitter Clint Bowyer started the race by leading all four Stewart-Haas Racing drivers to the green flag, but he never could clear the traffic and eventually dropped to a 25th-place finish.
“We just weren’t very good tonight. We were just off. Off in all areas,” Bowyer said.
Kurt Busch, Bowyer and Jones are now the bottom three drivers in the 16-driver field and in danger of being eliminated in two weeks.
It was 100 degrees when the race began, hours later than it did last season because NASCAR felt it was too hot for fans in attendance.

BIG HENDRICK DAY:
Hendrick Motorsports had a strong day with all three of its title contenders — Elliott, Bowman and Byron — inside the top 10. Byron pulled it off despite a tire rub that caused him to spin and bring out a caution during the third stage. Jimmie Johnson, who missed the playoffs this year for the first time since the format began in 2004, was the highest non-playoff driver at 11th.

DECENT RACE FOR TEAM PENSKE:
Although defending race winner Brad Keselowski struggled through the first two stages, he still managed a third-place finish. But teammate Joey Logano, despite leading a race-high 105 laps, had some damage to his Ford that dropped him to ninth. Ryan Blaney, the third Team Penske title contender, was a quiet fifth.

UP NEXT: Saturday night at Richmond Raceway in Virginia. Kyle Busch is the defending race winner. The field will then be cut by four drivers after the Sept. 29 race at Charlotte.
___
More AP auto racing: https://apnews.com/apf-AutoRacing and https://twitter.com/AP_Sports