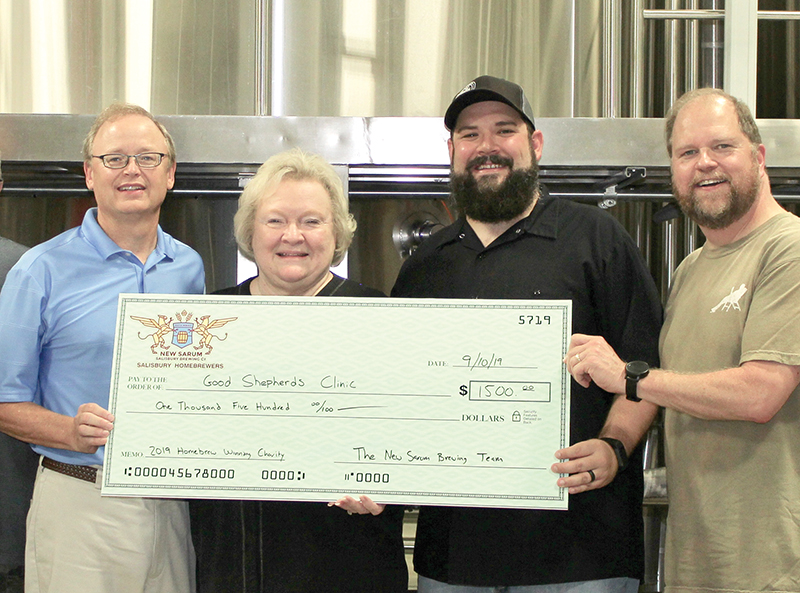 Photo submitted - Representatives of the Good Shepherd Clinic receive a check for $1,500 from New Sarum Brewmeister Andy Maben, second from right, and Don Rankin, right. The $1,500 was generated through the Salisbury Homebrewers Club’s annual competition.

SALISBURY — For the Salisbury Homebrewers Club, beer raises money for a good cause, too.

For three years, the club has chosen a beer made by one of its members during its annual brewing competition to sell on tap at New Sarum Brewery downtown, with proceeds going to a charity chosen by the club.

This year, the club chose Good Shepherd Clinic to receive $1,500 and presented a check to the clinic at New Sarum last week.

The clinic is a nonprofit agency staffed by volunteer health care professionals who provide services free to those unable to afford medical care. It’s located at 223 N. Fulton St.

“We built this thing on the premise of really wanting to donate to a nonprofit in Rowan County, and I really wanted to expose the Homebrewers Club as well,” said Andy Maben, brewmaster for New Sarum.

Money was generated through the sale of Don’s Summer Rye, made by Don Rankin. Maben described it as a summer ale with cascade hops and rye.

The beer isn’t available at New Sarum any longer, but Maben said those interested could try the next creation for a fundraiser in April at the brewery’s anniversary.

“We have some exquisite brewers in the club,” he said.

Maben said club members participating in the competition traditionally brew 5 to 10 gallons of their creation in February and that the winning beer is brewed on New Sarum’s four-barrel system, with sales starting a couple of months later.

While Rankin was this year’s winner, others have included Rick Godby, who made a beer called Bear’s Honey Basil in the competition’s first year, and Paul Lutz, who made Paul’s Black and Blue the second year.