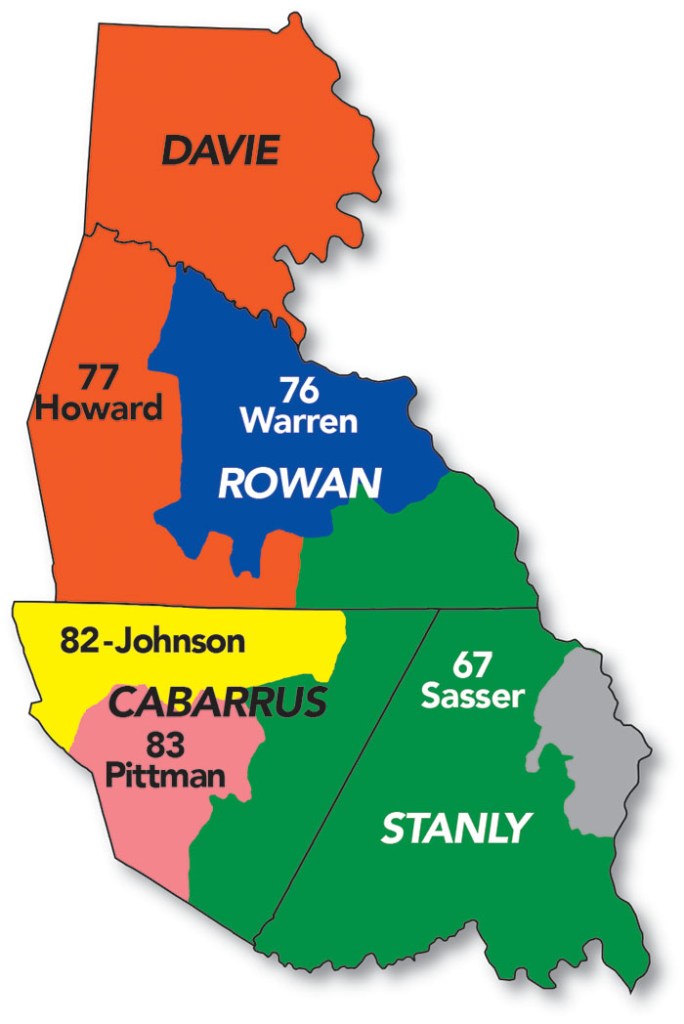 SALISBURY — Under a court order and with help from local legislators, the N.C. House last week approved newly drawn district maps. The Senate is slated to vote on their maps Monday.

Asked to be on the Redistricting Committees, Sen. Carl Ford, R-33, and Rep. Harry Warren, R-76, say they’ve been putting in long days as the court’s Wednesday deadline for new district maps approaches.

Ford is filling in for Sen. Bill Rabon, R-8, until he returns later this month. Ford may be asked to continue on the committee, too. Warren is filling in for Rep. Jeffrey Elmore, R-94, who is a school teacher.

A state court ruled Sept. 3 that the legislative district maps were drawn to give Republicans a partisan advantage and told the legislators new maps needed to be redrawn for the 2020 election. The finding specifically called out the House district grouping of Davie, Rowan, Cabarrus, Stanly, Montgomery and Richmond. This contains House Districts 76, 77 and 83. Julia Howard represents the 77th district, and Larry Pittman is the representative of District 83.

The findings made no mention of Ford’s 33rd district, which Ford said was because the map groups two whole counties, Rowan and Stanly.

And while the maps need to be nonpartisan, a vote on Friday afternoon on the House floor for their future maps was divided along party lines — 60-52. Pittman was the lone Republican who voted against the district maps.

Pittman said he believes the Redistricting Committee has done what they were tasked to do with integrity, but he said he objects t0 the courts intervening when it isn’t a census year.

“I may be standing alone on this, but I will be voting no, not against my colleagues or against the districts they have proposed, but against the courts requiring them to do so in violation of our State Constitution,” he said.

Warren voted in favor of the maps. He says he believes the committee complied with what the courts wanted. Warren, though, said he doesn’t know what the proposed maps mean politically, because legislators were not allowed to look at precinct makeup when drawing.

Howard says she has been concentrating not on the drawing of the maps but instead what to do with the budget surplus. Howard, who has served 16 terms, has seen her district change multiple times to include portions of Davidson, Forsyth, Rowan and Iredell counties to go along with her home of Davie County. In 2018, Howard became a representative of the northwestern portion of Rowan County.

For the newly drawn maps, she advises to do what’s fair and let it go.

Warren said the committee went off of five of the 1,000 maps developed by Jowei Chen, who was the expert witness hired by the N.C. Democratic Party for the court case.

Warren said the committee did not alter Chen’s districts if they knew the incumbent would be retiring or leaving the House, such as Rep. Holly Grange, R-20, who is running for governor.

The proposed House maps have Warren and Howard remaining as representatives for Rowan County. Howard’s district starting in Davie County and wrapping around the western portion of Rowan. Warren’s district would be more closely consolidated around Salisbury. District 83, Pittman’s, would be contained to Cabarrus County.

Pittman said, although he has been pleased to serve people in Rowan County, his current district was created in an attempt to remove him from the General Assembly. He was “double-bunked” with Ford before the now-senator chose not to face off against his Republican colleague.

“While I have met many wonderful people in Rowan County while serving a portion of the county in my current district, and have been pleased to serve them, the reality is that the district formed in 2017 was an unreasonable construct, intended to allow then-Rep. Carl Ford to eliminate me from the House,” Pittman said.

Rowan County would pick up District 67 in the southeastern portion of the county. The district also includes parts of Stanly and Cabarrus counties.

The Senate is expected to vote 7 p.m. on Monday after reviewing comments on the maps. The online portal that allows for public comment will remain open until noon on Monday. Senate leaders have urged both sides of the aisle to approve the Senate maps.

In a joint statement, Senate Democratic Leader Dan Blue and Republican Committee Chairs Paul Newton, Warren Daniel and Ralph Hise said on Friday, “This is the most transparent redistricting process in history. The maps produced in this room in the last several days are fair and nonpartisan. We approve of them and urge the full Senate to do the same.”

Looking ahead to 2020 and new district lines, Warren says he understands it will take a long time to redraw the entire state. By then, he hopes his proposed bill, NC FAIR State and Congressional District Act, which would establish an Independent Redistricting Commission to propose a district map, will be law.