High school football: Raiders win on road with first shutout in a decade 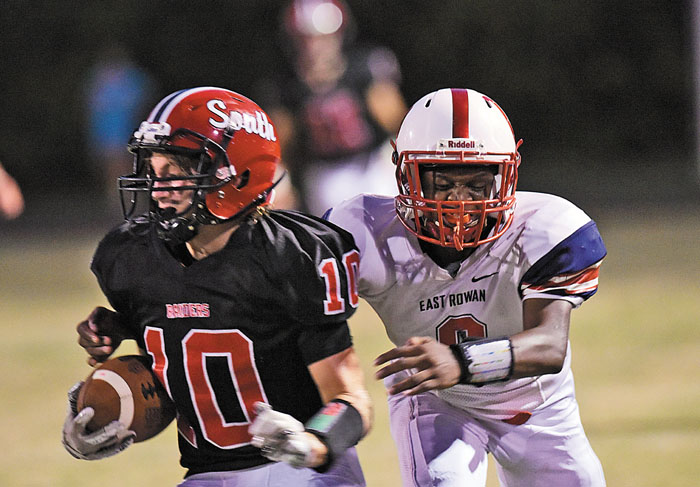 South Rowan's Barrett Thompson (10), after catching a pass, during an earlier game this season. South Rowan shut out East Davidson on Friday night, 35-0. ...File photo by Wayne Hinshaw, for the Salisbury Post

THOMASVILLE — When it comes to momentum-changers or momentum-builders, it’s hard to beat scoring a touchdown on a kickoff.

After a bumpy first half that ended with South Rowan’s football team leading East Davidson 7-0,  Nathan Chrismon’s 87-yard kickoff return for a touchdown started the second half and ignited South Rowan’s 35-0 victory at East Davidson.

“That kickoff return really got the ball rolling for us,” South head coach Daniel Yow said. “It’s just huge to start conference play with a win.”

South, which had allowed 98 points while being trounced by Carson and East Rowan in non-conference outings, was a 7-point underdog on the road, so the margin of Friday’s victory was stunning.

The first half was mostly frustrating for both teams. South (1-2, 1-0) missed a field goal after Chrismon returned a punt 67 yards to the Thomasville 8-yard line, and the Golden Eagles (0-3, 0-1) stopped themselves with penalty flags. They lost two players to ejections.

It appeared the game would be scoreless at the break, but South drove 67 yards against the clock to score in the final seconds of the first half. Drew Huffman threw a 30-yard touchdown pass to Austin Peacock who scored with 11 seconds left in the half.

In addition to his kickoff return, Chrismon dashed 22 yards on a jet sweep with 5:53 left in the third quarter to push the Raiders’ lead to 21-0. That was the fifth TD of the season for the quick  sophomore, who is the son of South baseball coach Thad Chrismon and South AD Angie Chrismon and the grandson of Larry Deal, a South coaching legend.

South turned it over three times (two fumbles, one interception), but Ward Bond intercepted a pass for South as the game went to the fourth quarter.

South scored twice in the final quarter to pull away. Huffman threw a 20-yard touchdown pass to Braden Graham with 7:34 left.

Then Brayden Garrett scored on a 4-yard run with 3:12 remaining.

South’s defense was an even bigger surprise than the offense. It was the first shutout the Raiders have recorded in a decade. South blasted North Iredell 63-0 on Oct. 2, 2009. South went 104 games between shutouts by its defense.

“I’d  like to tell you we had a couple of guys who really stood out, but everybody on our defense played great,” Yow said. “It was the whole unit, all 11 guys, and the guys who rotated in for them.”