Germanfest aims to be bigger, better than ever 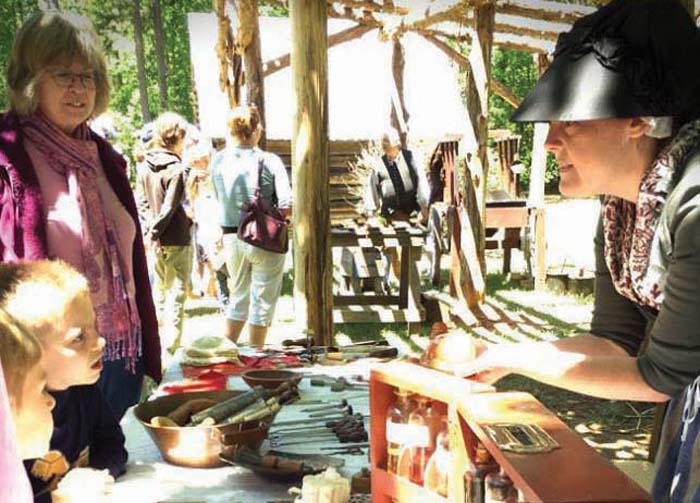 Shannon Walker, right, specializes in 18th century medical interpretation. She will be a guest at Germanfest Saturday. Submitted photo

GRANITE QUARRY — You’ve come to expect a lot of activities, food, drink and history at Germanfest, and this year won’t disappoint.

The annual festival, sponsored by Rowan Museum Inc. on the site of Rowan County’s oldest house, will be from 10 a.m. to 4 p.m. Sept. 21 at the appropriately named Old Stone House, 770 Old Stone House Road.

Germanfest celebrates Rowan County’s German heritage, mixing Colonial and modern German traditions. The cost is $5 for adults and $3 for students.

There is limited parking at the site and off-site, with free shuttle service available from 10 a.m. to 4 p.m. at Granite Crossing Shopping Center (a former Winn-Dixie grocery and Fred’s Discount stores) on North Salisbury Avenue in Granite Quarry.

Guests will include craftsman Phil Gilson, a Colonial-style, full-time glassblower from Lawrenceville, Virginia; and Shannon Walker, who works at the Brunswick Town/Fort Anderson State Historic Site and specializes in natural medicines and remedies and 18th-century medical interpretation.

New Sarum Brewing of Salisbury has made its traditional “Braun Bock” for Germanfest. It is named for Michael Braun, who built the Old Stone House in 1766.

As always, tours will be offered of the Old Stone House.

According to a profile of Gilson in Early American Life Magazine’s directory of craftsmen, Gilson “might be the last colonial American-style glassblower working full time in the traditions developed in the 18th century.”

A cousin of the Wistars, owners of America’s first successful glass operation, Gilson has a passion for glassblowing that has been a family legacy since the 1730s.

Gilson focuses most of his work on producing and perpetuating designs for historic homes, museums, schools and the living history and re-enacting community, according to his magazine profile.

He makes many of his pieces using original molds and hand tools that have been passed down for generations.

Gilson is the last of two known master chippers in the country. Chipping is the trade of carving directly into cast-iron glass molds to re-create embossed bottles and flasks of the past.

Randy Lassiter, a Rowan Museum board member who handles much of the publicity for Germanfest, says Gilson will be making a special bottle incorporating the Old Stone House crest.

Walker is an employee of the N.C. Division of State Historic Sites and Properties. She joined the staff of Brunswick Town/Fort Anderson in January 2010, and she currently is assistant site manager.

Walker majored in history and studio art at Meredith College and attended graduate school at the University of North Carolina at Wilmington, majoring in public history.

“In addition to history and art, she has long had a love of the study of medicine, botany and the natural world,” her biography says.

Both Gilson and Walker are expecting to be guests of Rowan Museum at “Deutscher Abend” (German Evening) Friday at the Old Stone House.

Deutscher Abend kicks off the Germanfest weekend and is a separate patrons event for the museum. Another guest will be Klaus Becker, honorary German consulate from Charlotte.

The guest speaker for Deutscher Abend will be Michael Thompson of Pfeiffer University, who will talk about the importance of North Carolina barbecue.

Flying high and proud: Thanks to gift from funeral…