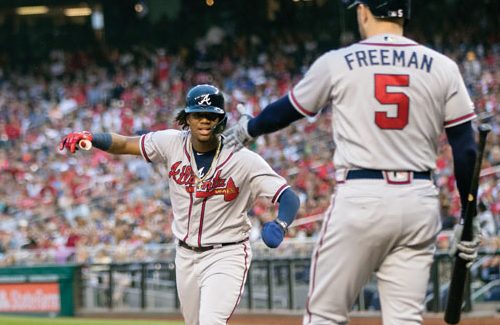 By GREG SWATEK Associated Press
WASHINGTON (AP) — The Atlanta Braves celebrated another playoff berth with heavy hearts.
Ronald Acuña Jr. ignited the decisive four-run rally with the go-ahead, two-run double in the seventh inning, as the NL East leading Braves wrapped up a playoff berth with a 10-1 victory over the Washington Nationals on Saturday. The victory also eliminated the Phillies from winning the NL East.
But there was no celebrating in the postgame clubhouse, as the team remained concerned about utility man Charlie Culberson, who was struck directly on the right cheekbone by a 91 mph fastball in the seventh on the first pitch by Nationals reliever Fernando Rodney.
“He was good when he went to the hospital. I mean, he was alert and all of that stuff,” Atlanta manager Brian Snitker said of Culberson, who was pinch-hitting for starting pitcher Mike Foltynewicz with two on and no out in the seventh of a 1-1 game.
“We just don’t any of the extent of what’s going on yet. We are just praying for him and his family. That’s scary.”
Culberson was helped to his feet with a towel pressed to his face and taken off the field on the back of a cart on his way to a hospital.
Snitker then launched into a tirade against crew chief Tim Timmons that got the manager thrown out of the game for the 13th time, including four this season.
Timmons assessed Culberson a strike since he squared up to bunt. The ball never made contact with the bat.
“You can’t bunt when the ball is coming at your face,” Snitker said. “That just sounds like … My God. I am not going to even get into that. I am sitting there looking at this guys, pooling blood on the ground. And I am like, ‘Come on.'”
Snitker was much more subdued after the game, at one point becoming choked up and nearly shedding a tear while talking about Culberson.
His players shared the sentiment.
“It was very tough to see that. He’s a phenomenal human being. One of the best teammates you could have,” Foltynewicz said. “I look up to him as a father. He actually has three kids. It his kid’s birthday today, one of them. I want to be just like him as a father.”
The Braves (93-57) did not miss a beat after Culberson was taken off the field and seemed to rally behind their fallen teammate.
Acura and Ozzie Albies hit back-to-back doubles that drove in runs and ignited another bullpen meltdown for the Nationals.
Wander Suero (5-8) was charged with the loss, as the Washington bullpen gave up nine runs over the final four innings.
Foltynewicz (7-5) earned the win after tossing six solid innings, allowing an earned run on four hits and striking out five. The Braves have won the last 11 games he has started dating to June 11.
Atlanta will be making consecutive postseason appearances for the first time since 2012-13. The Braves reduced their magic number to clinch their 19th NL East title to four.
TRAINER’S ROOM
Braves: 1B Freddie Freeman (right elbow soreness) was back in the lineup after leaving Friday’s game in the fourth inning for precautionary reasons. He was hitless in four at-bats with a strikeout and an intentional walk. Freeman said he knew he was good to go when he raised his arm in the shower to wash his hair.
Nationals: C Kurt Suzuki (right elbow inflammation) ran sprints and emulated blocking pitches in the bullpen prior to Saturday’s game after taking swings in the batting cage Friday. He has not played since Sept. 7 and is still not throwing a baseball.
“The biggest thing is getting the inflammation out of his elbow,” manager Dave Martinez said.
Rookie Raudy Read caught Saturday’s game. Yan Gomes received a day off after catching seven consecutive games.
UP NEXT
Braves: LHP Max Fried (16-5, 4.02) looks to bounce back after suffering his first loss since July 6 earlier in the week against the Phillies. He is 1-1 against the Nationals this season.
___
More AP MLB: https://apnews.com/MLB and https://twitter.com/AP_Sports

Tyler Reddick stretches gas tank to a win in…