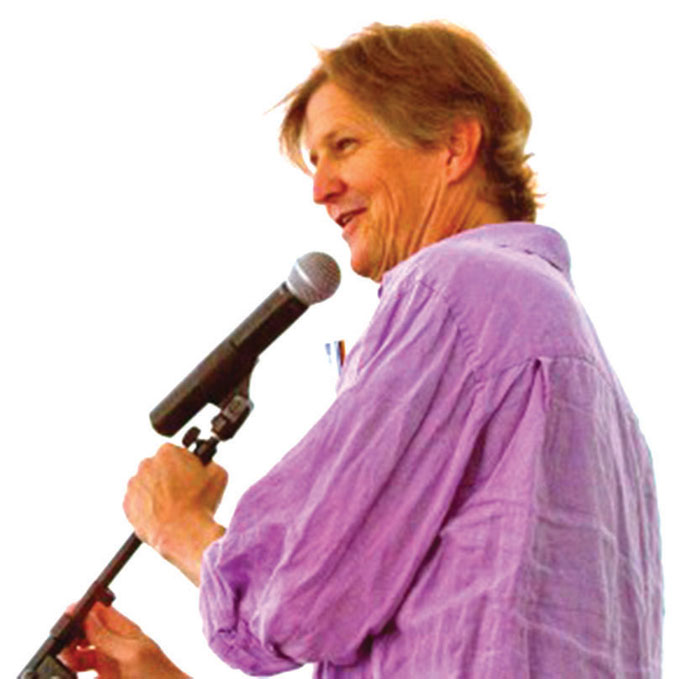 Submitted photo Storyteller Andy Offutt Irwin will perform at the 20th anniversary of Stories by the Milstream on Thursday.

SALISBURY — If you ask Andy Offutt Irwin what storytelling means to him, he has a ready answer.

“If eyes are the window to the soul, then stories are the soul’s door,” he says.

If that is true, then Irwin has spent more than 20 years opening that door and sharing his soul with audiences across the nation. This week, Irwin will bring his talents to Rowan Public Library’s 20th Millstream Festival.

As the featured storyteller, Irwin will share stories with second-grade students from Rowan-Salisbury Schools, as well as a number of private school and home-school students. He will join 24 other regional storytellers who will share tales at Sloan Park in Mount Ulla.

Irwin has a broad range of storytelling and performance experience, from being part of an improvisational comedy group at Walt Disney World, a keynote speaker at the Library of Congress Viburnum Foundation Conference on Family Literacy, and an artist in residence at Emory University’s Oxford College in the theater department.

At 7 p.m. Thursday, Irwin will present a public “Storytelling Hour” at the Headquarters library’s Stanback Room, at 201 W. Fisher St. An encore performance will be at noon Sept. 21 in the Stanback Room. Admission is free, and all ages are welcome to the family-friendly performance. Doors will open at 6:30 p.m.

According to Irwin, the most enjoyable part of sharing stories is when he can see the audience “seeing” his stories.

Most of his performances revolve around the character of Marguerite Van Camp, Irwin’s 85-year-old aunt who has just graduated from medical school. Irwin slips into a shaky Southern drawl as he imitates her speaking voice.

In reality, this fictional character was inspired by Andy’s mother and grandmother, whom he credits as the source of his love for storytelling.

“I tell the truth,” he explains. “Even if it’s fiction. I tell about my people to show that we are all each other’s people.”

Irwin’s proudest moment as a storyteller was his appearance as a featured New Voices storyteller at the National Storytelling Festival in 2005, which he has referred to as the “Super Bowl” of storytelling.

He received the Circle of Excellence Award from the National Storytelling Network in 2013 and has earned multiple honors for his storytelling recordings, including a Parents’ Choice Gold Award for his first audio CD for children, “Andy’s Wild Amphibian Show.”

When creating his own stories, Irwin says “the biggest task is to capture ideas as soon as they hit. Then I have to have the discipline to sit down and get into some ‘deep work.’”

Irwin’s stories often focus on topics such as growing up in a small town, growing old, family bonds, race relations in the Deep South in the 1960s, and practical jokes. He credits his background in the theater for helping him develop his storytelling skills, as well as his experience as a stand-up comedian and singer-songwriter.

Irwin continues to write and perform songs in addition to the other creative pursuits. He writes a column in The Covington News, the weekly newspaper in his hometown of Covington, Georgia. He continues to work as a director as well, currently working with Grammy Award-winning folk musician Marcy Marxer on her upcoming one-woman play.

The Millstream Festival and the Millstream Storytelling Hour are sponsored by the Friends of Rowan Public Library. For more information about either program, contact Hope Loman at 704-216-8258 or Hope.Loman@rowancountync.gov or visit www.RowanPublicLibrary.org.

East Spencer board to consider partnering with Paul L.…