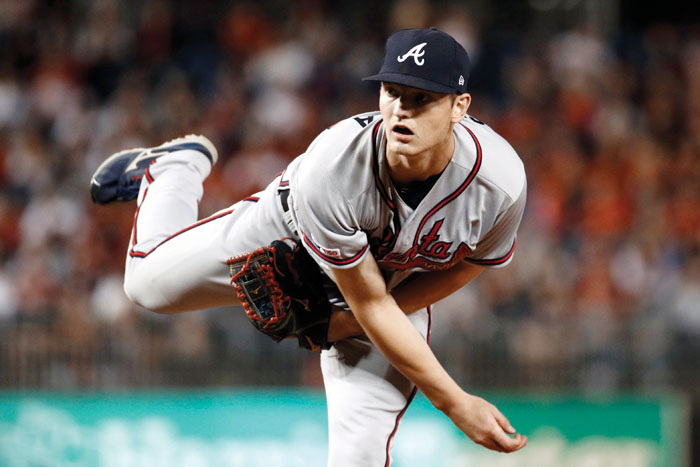 Atlanta Braves starting pitcher Mike Soroka follows through on a pitch to a Washington Nationals batter during the second inning of a baseball game, Friday, Sept. 13, 2019, in Washington. (AP Photo/Patrick Semansky)

By HARVEY VALENTINE Associated Press
WASHINGTON (AP) — Mike Soroka allowed one hit over six innings, Ozzie Albies had three hits including a home run and the Atlanta Braves beat the Washington Nationals 5-0 on Friday night.
Atlanta moved 9½ games in front of Washington in the NL East and reduced its magic number to six.
Washington leads the NL wild card race.
Braves first baseman Freddie Freeman was lifted for precautionary reasons in the fourth inning with right elbow soreness, according to the team.
Atlanta’s Nick Markakis, back after missing 43 games with a fractured left wrist, had a single, a double and a sacrifice fly and made a sliding catch in left field to take a hit away from Victor Robles.
After losing to the Nationals and Max Scherzer Sunday in Atlanta, Soroka (12-4) won the rematch. Soroka, who struck out four and walked three, didn’t allow a hit until Adam Eaton’s leadoff double in the fourth.
Scherzer (10-6) gave up three runs on seven hits in five innings. Since returning from the injured list with a mid-back strain, Scherzer is 1-1 with a 3.91 ERA in five starts.
Atlanta has won 10 of its past 14 games against Washington.
Washington’s Juan Soto had a double and walked twice. Anthony Rendon went 0 for 4, ending his 27-game on-base streak.
Markakis, playing left field for the first time this season with fellow lefty Matt Joyce (two hits) in right against the right-hander Scherzer, doubled with one out in the fourth. Joyce singled him home and later scored on Dansby Swanson’s double.
With one out in the fifth, Markakis flied to the warning track in center, scoring Ronald Acuña Jr.
Albies led off the seventh with his 23rd homer.
Nationals first-base coach Tim Bogar was ejected for apparently arguing a check swing call on Howie Kendrick in the eighth inning.
TRAINER’S ROOM
Braves: INF John Camargo was placed on the 10-day injured list with a right shin fracture. Manager Brian Snitker said Camargo could return before the end of the season.
Nationals: C Kurt Suzuki (right elbow inflammation) may be able to start swinging a bat by the end of the weekend, manager Dave Martinez said. … 1B Matt Adams, who left Thursday’s game at Minnesota after hurting his left triceps, was being evaluated by team doctors.
UP NEXT
Braves: RHP Mike Foltynewicz (6-5, 5.00 ERA) allowed eight runs on eight hits over four innings in a no-decision June 22 at Washington.
Nationals: RHP Austin Voth (1-1, 4.00) is 0-1 with a 3.60 ERA, 13 strikeouts and two walks in two starts against Atlanta this season.
___
More AP MLB: https://apnews.com/MLB and https://twitter.com/AP_Sports