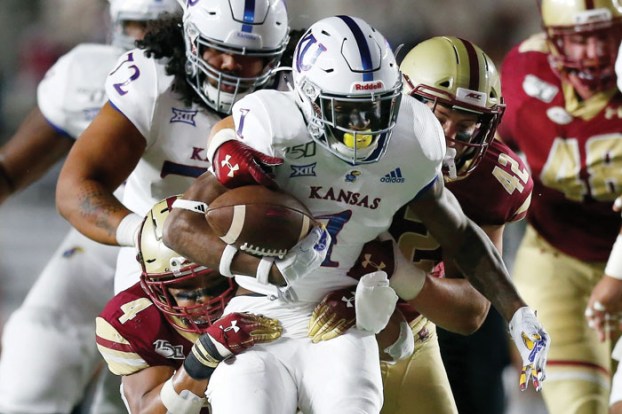 By KEN POWTAK Associated Press
BOSTON (AP) — Kansas coach Les Miles’ return to college football brought him some quick joy.
It also brought the Jayhawks something they haven’t had in a long time — a road win at a Power Five school.
Carter Stanley threw for three touchdowns, Khalil Herbert rushed for 187 yards on just 11 carries and Kansas stunned Boston College 48-24 Friday night for its first road win over a Power Five team in nearly 11 years.
The Jayhawks (2-1), who entered as a three-touchdown underdog, won their first road game against a power conference opponent since a victory at Iowa State on Oct. 4, 2008, a span of 48 straight losses. Pooka Williams ran for 121 yards on 22 attempts with a TD, and Herbert added a late score. Stanley was 20 of 27 for 238 yards with an inception on his first attempt.
“If anybody wants to know why a guy would come back to college football, this tells you how fun and how important college football is,” said Miles, hired by the school last November after being fired from LSU two years ago.
“It shows the Jayhawks are coming,” he said. “I think it’s very realistic that we can be a great program and have real quality football teams year after year — not today, not tomorrow. Shortly, in the future.”
AJ Dillon ran for 151 yards on 27 carries and Anthony Brown went 18 for 36 with 195 yards a TD pass for the Eagles (2-1). Brown also caught a TD.
“We didn’t play very well,” BC coach Steve Addazio said. “I think we saw a few signs of this last week. I think today that we didn’t play well at all, and that’s my responsibility.”
Kansas went into the locker room with a 28-24 lead at the end of a wide-open first half that saw the teams combine for 623 yards (BC 313, Kansas 310). They also totaled 17 plays of 10 yards or more.
“I’ve been a Kansas fan my whole life and I can’t remember when it was,” Kansas linebacker Jay Dineen said of the last Power Five road win. “It’s huge having it off our shoulders.”
Trailing 24-21, Kansas ran a simple pitch play at their own 15 with 40 seconds left and Herbert broke up-the-middle and headed down the right sideline for 82 yards before being knocked out of bounds.
“We needed to get this win,” Stanley said. “The manner that we got it was huge.”
Two plays later, Stanley hit Andrew Parchment — his second of two TD catches — for a 3-yard score.
Midway into the third quarter, the Jayhawks increased it to 38-24 when Williams had a 12-yard scoring run, capping an 87-yard drive.
BC had taken a 24-21 edge when Brown caught his 12-yard score from receiver CJ Lewis.
The Eagles scored on their first two drives and led 10-0 before the Jayhawks scored on six straight possessions.
THE TAKEAWAY
Kansas: The Jayhawks rebounded from a miserable loss at home against Coastal Carolina when they collected only 280 total yards by putting up 567 yards Friday. . They beat Central Michigan on the road last season. Before that, their last road win was at Texas El-Paso on Sept. 12, 2009.
Boston College: It’s the worst home – and probably overall – loss in Addazio’s seven seasons at the school. Unless the defense gets fixed quickly, it could lead to a rough year when conference play and a tough late schedule loaded with road games at Clemson, Syracuse and Pittsburgh — and a nonconference matchup at Notre Dame — kicks in.
FLYING QB
On a third-and-4 at BC’s 28 early in the second quarter, Stanley rolled to his left on a keeper and hurdled over Eagles’ DB Nolan Bergersen for a first down.
Miles was fired up on the sideline.
“It shows everybody that he cares as much as they do to put your body at risk for his teammates. They realize that,” Miles said before joking. “There’s somethings that I’d like to take back — like the jump over the top of the guy.”
BIG CHUNKS
Kansas had five scoring drives of 78 yards or more, finding big holes through BC’s defense on numerous plays.
ERASE THE PAIN
“Moving forward, I think you’re going to see a hungrier team — a team that’s not really taking any of these shots for granted,” Dillon said.
UP NEXT
Kansas: Hosts West Virginia in its first Big 12 matchup next Saturday.
Boston College: Travels to Rutgers next Saturday for its first road game.
___
More AP college football: https://apnews.com/Collegefootball and https://twitter.com/AP_Top 25