Is Cam Newton running out of time as Carolina’s quarterback? 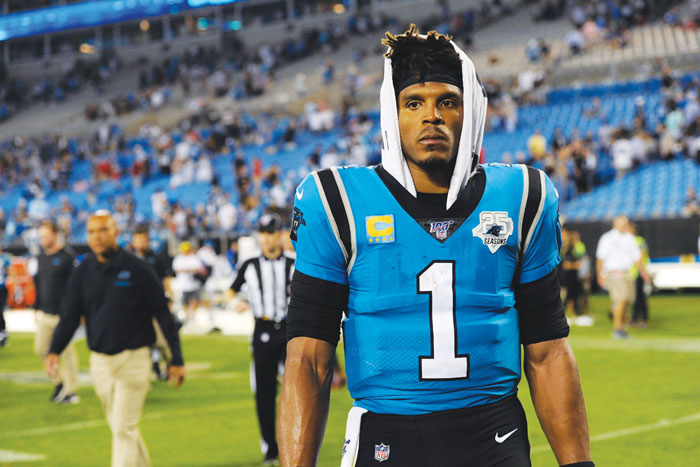 By STEVE REED AP Sports Writer
CHARLOTTE (AP) — Cam Newton has lost his last eight starts, and it’s becoming increasingly obvious the Carolina Panthers’ hopes of turning him into a pocket passer are failing.
That raises questions about the former No. 1 pick’s long-term future in Carolina.
Whether it’s a matter of coaches not wanting to jeopardize Newton reinjuring his right shoulder or sprained foot or Newton not wanting to run as much, it is clear the 2015 NFL league MVP is no longer the dominant multidimensional quarterback he once was. He’s run five times this season for minus-2 yards, fumbling twice .
Newton was once one of the toughest and most dangerous quarterbacks in the league when he combined running with passing.
But with the Panthers getting away from using the 6-foot-5, 245-pounder in read option plays, Newton is among NFL’s bottom tier quarterbacks. Accuracy has never been his strength — he’s a 59.6 percent career passer.
Newton completed 24 of 50 passes for 324 yards in Carolina’s 20-14 loss to Tampa Bay on Thursday night. But he missed 15 open receivers — 10 passes overthrown, five underthrown — according to ESPN Stats & Information research. ESPN also cited Newton being 0 for 10 passing while under duress, along with taking three sacks.
“All fingers are just pointing back to me specifically on offense,” said Newton, who has not thrown or run for a touchdown in his last four starts.
The bottom line remains this: For Newton to be effective he needs to be able to run. But in his last six starts he’s run for more than 35 yards only once and hasn’t run for a score since Oct. 28, 2018. The Panthers are 0-7 when Newton runs twice or less in a game.
NFL defenses no longer seem to fear Newton as a runner.
“He can’t take them hits like that,” Buccaneers cornerback Vernon Hargreaves said. “It’s going to eat his body up. … We expected more throwing as he is getting older in his career.”
Under the current setup, if Newton can’t make the transition to being primarily a pocket passer the Panthers could have a tough decision to make after the season.
Newton is scheduled to cost $21 million under the 2020 salary cap. The Panthers, however, could save $19 million under the cap by releasing him and dealing only with $2 million in dead cap space, according to Sportrac.
The options behind Newton remain unproven.
Kyle Allen is the 2 quarterback. He led the Panthers to a 33-14 win over the Saints in Week 17 last year but looked shaky in the preseason. The Panthers drafted Will Grier from West Virginia in the third round, and while they’re high on him as a long-term replacement he’s not yet taken the next step to being NFL ready. He has been listed as inactive the last two games.
The best immediate option may be letting Newton do what he does best — run the football.
WHAT’S WORKING
Despite the loss, Carolina’s defense was strong for most of the game, particularly linebacker Luke Kuechly. He finished with 17 tackles, including two for a loss, one of resulting in a safety when he dragged down Peyton Barber in the end zone. But the defense could certainly use help in the form of points from the offense, which failed to score a touchdown against the Bucs.
WHAT NEEDS HELP
The Panthers pressured the quarterback — sacking Jameis Winston three times — but they need to force turnovers. Carolina has just one takeaway in two games and didn’t force any against Winston, who has shown a penchant for turning the ball over.
STOCK UP
Undrafted rookie kicker Joey Slye is doing a nice job filling in for Graham Gano, who is on injured reserve. Slye is 6 of 7 on field goal attempts, including 3 of 3 on kicks of longer than 50 yards.
STOCK DOWN
Left tackle Daryl Williams is on a one-year, prove-it deal but things didn’t go so well against the Bucs. He allowed sacks to Shaquil Barrett on back-to-back plays, had a holding penalty and didn’t come up with a good block on Christian McCaffrey’s fourth-and-1 run at the Bucs 2-yard line on a crucial play late in the game. Rookie second-round pick Greg Little is expected to return next week from a concussion and could offer some competition at that spot.
INJURED
The Panthers reported no injuries but hope an extra few days of rest will allow outside linebacker Bruce Irvin (hamstring) to play in Week 3 against Arizona.
KEY NUMBER
3 of 17. The Panther’ combined conversion rate on third and fourth down against the Bucs. Carolina was 3 of 14 on third downs and 0 of 3 on fourth down.
NEXT STEPS
Offensive coordinator Norv Turner must figure out a way to get Newton going and find more ways to protect him. Carolina has a good chance to rebound on Sept. 22 at Arizona.
___
More AP NFL: https://apnews.com/NFL and https://twitter.com/AP_NFL