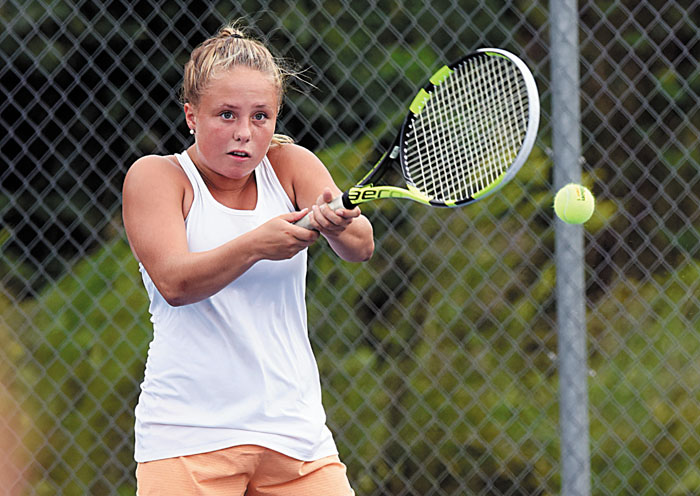 CHINA GROVE — Carson’s tennis team stayed undefeated on Thursday on its home courts, rolling to a 9-0 win against West Rowan.

West won the North Piedmont Conference in 2018 and returned six experienced players but graduated county and conference player of the year Payton Holt.

Carson, NPC runner-up last season, is experienced and deep, and has three players — senior Maci Cooper and juniors Lindsey Conrad and Jadyn Kirkpatrick — who would be No. 1s for a lot of squads.

“It was 9-0 today, but it was closer than it sounds,” Carson coach Kayela Galloway said. “There were no tiebreakers, but there were very competitive matches with West, especially at No. 1 and No. 4 singles and No. 2 doubles.”

Cooper played No. 1 for the Cougars — she’s been steadily moving up through challenge matches — and won 6-2, 6-1 against West sophomore Lacy Waggoner, who is now 4-2.

“Lacy has a great forehand,” Galloway said. “But Maci was patient and consistent.”

At No. 4 singles, Carson’s Carleigh Perry took a 6-2, 6-3 decision against Skylar Jahnke. It was the first singles loss of the season for Jahnke.

“Carleigh was very aggressive going to the net,” Galloway said. “She used her height well.”

West has an unusual pairing in its No. 1 doubles team, playing No. 1 and No. 6 as a unit. Kirkpatrick/Cooper, the defending county and conference champs, won 8-3.

West’s No. 2 doubles team of Jahnke/White is strong, but Conrad/Perry handed the Falcon duo an 8-4 loss, their first setback of the season.

“West’s No. 2 team has been playing together for years, and experience is a great advantage,” Galloway said. “We don’t have that kind of experience at No. 2 doubles, but we’ve got great athletes and they played together very well today.”

Carson has some tests coming up, traveling to strong 4A Lake Norman on Monday before hosting South Iredell, which looks like the Cougars’ biggest obstacle to winning the NPC championship, on Tuesday. South Iredell beat West Rowan 7-2.