Flying high and proud: Thanks to gift from funeral home, VFW Post 3006 has new flags 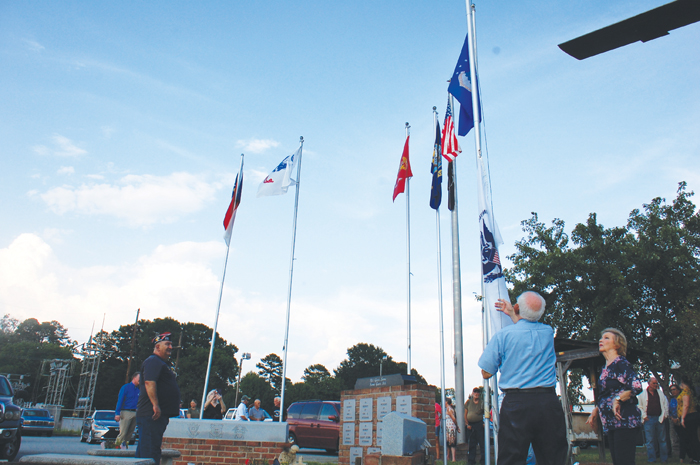 As Mary Williams watches early Thursday evening, Bill Anderson pulls up the Coast Guard flag — one of six new ones for VFW Post 3006's flag garden at the front of the building. Williams' husband was a Coast Guard veteran. At top right, one of the blades of the post's display helicopter is visible. Mark Wineka/Salisbury Post

SALISBURY — A couple of months ago, the flags outside Hudson-Miller-Tatum VFW Post No. 3006 were looking pretty worn, and someone with Powles Staton Funeral Home noticed their tired condition.

Thursday evening, all that was rectified as the VFW members hoisted six new flags in the flag garden outside the post on Brenner Avenue.

The flags, courtesy of the funeral home in Rockwell and Carolina Cremation in Salisbury, represent the military branches, along with a new state of North Carolina flag.

VFW Post 3006 Commander Jim Fox thanked the four representatives of Powles Staton for the gift and their continued support of veterans through various functions during the year.

“They go above and beyond the call to help veterans,” Fox said.

After saying the Pledge of Allegiance to the U.S. flag, the six new flags went sent up the flag garden poles one by one.

With the new flags in place, Powles Staton then treated the post to a fish-fry “cookout,” which was actually served inside the VFW’s air-conditioned Hudson Hall.

Once again, Rowan County Register of Deeds John Brindle and his assistant, Shane Aldridge, did the cooking honors, as they have for many Powles Staton Funeral Home events.

Russ Roakes, one of the funeral directors, said his mother, Sandra, made a tub of tartar sauce for the cookout using her father’s recipe. Russ said it’s so good, “you could drink the stuff.”

Mustered in 1941, VFW Post 3006 is known by many as the post with the helicopter on permanent display out front. It’s located near the Hefner VA Medical Center on Brenner Avenue.