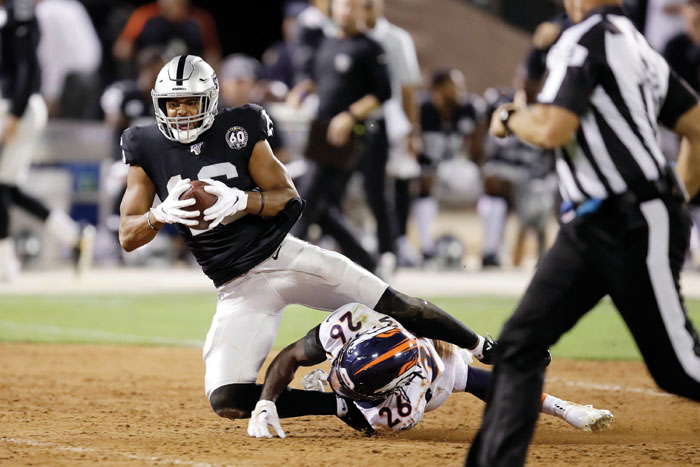 FILE - In this Sept. 9, 2019, file photo, Oakland Raiders wide receiver Tyrell Williams tumbles over Denver Broncos cornerback Isaac Yiadom (26) after making a reception during the first half of an NFL football game in Oakland, Calif. It will be the end of an era of sorts this weekend in Oakland. Not that anyone figures to be mourning what should be the final NFL game ever played on a field with infield dirt, especially the players who have had to deal with the bad footing, ripped jerseys, scraped arms and legs and hard falls onto a surface with no cushion.(AP Photo/Ben Margot, File)

By JOSH DUBOW AP Pro Football Writer
ALAMEDA, Calif. (AP) — It will be the end of an era of sorts this weekend in Oakland.
Not that anyone figures to be mourning what should be the final NFL game ever played on a field with infield dirt, especially the players who have had to deal with the bad footing, ripped jerseys, scraped arms and legs and hard falls onto a surface with no cushion.
The Raiders are set to host the Kansas City Chiefs on Sunday at the Oakland Coliseum in their final home game before the end of the World Series. With the Coliseum the last stadium left that hosts an NFL and baseball team and the Raiders set to move to fancy new digs in Las Vegas next year, no more players will have to deal with the travails of infield dirt the way greats like Joe Namath, Joe Montana and Eric Dickerson had to in their careers.
“It’s like running full speed and then when you get to full speed, belly flopping on pavement,” Raiders quarterback Derek Carr said. “That’s about what it feels like when you hit. If you look around it, our guys are all patched up. Stuff on their knees, taped up today and things like that. That stuff is like road rash, for real. I wish they’d soften it up, but I guess it needs to be a fast track.”
Teams over the years have been moving from the multipurpose stadiums that were all the rage in the 1960s and ’70s to football-only palaces with price tags in the billions.
Back in 1981 when the Raiders played their final season of their first stint in Oakland, 16 of the 28 teams in the NFL shared stadiums with baseball teams, including 10 that played on grass fields that often also featured infield dirt on parts — at least until the end of the baseball season.
But over the years, famous baseball venues from Yankee Stadium to Fenway Park to Wrigley Field to Tiger Stadium all hosted professional football teams as well, giving this game Sunday a throwback look.
“You know what, I like the old elements of football, I’ve been accused of being old school,” Raiders coach Jon Gruden said. “I know a lot of friends like me that like watching a football game on the dirt. I used to like to play in the yard, but it’s going to be pretty neat, Chiefs-Raiders on the dirt one more time.”
But the Coliseum has outlived its usefulness to the Raiders, who decided to move to Las Vegas when they couldn’t reach a deal with local officials on plans for a new stadium in Oakland.
Beyond the dirt infield, there are the cramped locker rooms designed for 25-man baseball teams rather than 53-man football rosters. There are new conferences held in weight rooms and batting cages. There are floods and other mishaps teams have had to dodge.
“There’s just something about that place that’s crazy,” Chiefs coach Andy Reid said. “Last year, the sewage system flooded, and it simplifies the game for you. You got to work through a few things to get out there, and then you still have the baseball infield. These guys can tell their grandkids that they used to play baseball there and we’d go out during the baseball season and play in the dirt, literally. I think there’s something to that.”
The venue has special meaning to Chiefs quarterback Pat Mahomes, since it’s the only stadium he will play in as an NFL player that his father Pat Mahomes Sr. pitched in as a major leaguer.
The younger Mahomes threw for 295 yards and four TDs in his only appearance here last year on an all-grass field in December, but now will get to do it on the dirt.
“I know it’ll be different,” he said. “I’ve seen how other teams have attacked. But until you get out there we’ll just go with the flow … It could be the last time we get to play on something like that.”
It might not be so enjoyable if he asks those who have done it before.
Raiders rookie running back Josh Jacobs had his first dirt experience on Monday night when he gained 113 yards from scrimmage and scored two touchdowns. Those memories will be more enjoyable than playing on the unusual surface.
“It rips jerseys. It literally goes through anything. You leave the game with a lot of scratches and stuff like that,” Jacobs said. “The ground hurt more than the tackles.”
While Raiders players don’t like it and won’t miss it, there has been perhaps a little advantage to playing on a surface opponents aren’t used to. It’s more difficult for kickers, to make cuts and for pass rushers to get off on the snap.
Maybe that’s why the Raiders have fared better at home early in the season when the dirt is still there than they have later on after the A’s season is done. Since 2010, the Raiders are 9-6 at home when playing with the infield dirt compared to 24-30 without it.
“It’s a big advantage. Our guys love it so much,” Gruden said sarcastically. “It’s like I used to play when we were in Tampa and it was a 120-degree heat index, and everybody said it was an advantage to us.”
___
AP Sports Writer Dave Skretta in Kansas City, Missouri, contributed to this report
___
More AP NFL: https://apnews.com/NFL and https://twitter.com/AP_NFL