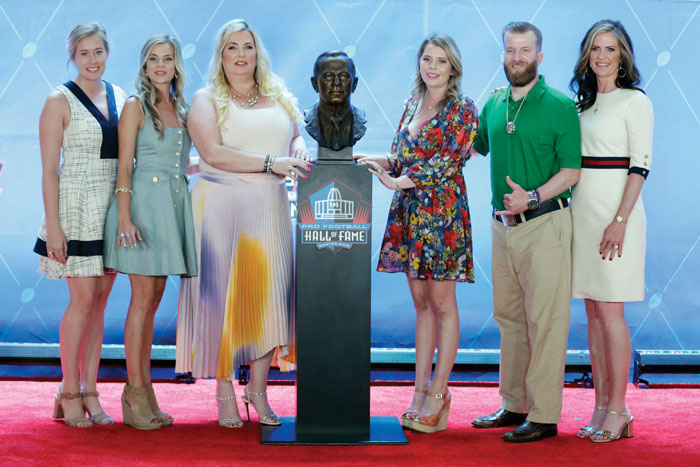 FILE - In this Aug. 3, 2019, file photo, members of the Bowlen family, from left to right, Brittany Bowlen, Annabel Bowlen, Amie Bowlen Klemmer, Christina Bowlen, Patrick Bowlen and Beth Bowlen Wallace pose with a bust of former Denver Broncos owner Pat Bowlen during the induction ceremony at the Pro Football Hall of Fame in Canton, Ohio. Pat Bowlen's two oldest daughters, Wallace and Klemmer, have put themselves at risk of being disinherited by challenging their father's trust, which is in charge of selecting the next controlling owner of the Broncos, a franchise valued at more than $2.5 billion. (AP Photo/Ron Schwane, File)

By ARNIE STAPLETON AP Pro Football Writer
ENGLEWOOD, Colo. (AP) — Pat Bowlen’s two oldest daughters have put themselves at risk of being disinherited by challenging their late father’s trust, which is in charge of selecting the next controlling owner of the Denver Broncos, a franchise valued at more than $2.5 billion.
Beth Wallace and Amie Klemmer filed a lawsuit Friday in Arapaho County Court challenging the validity of the trust, which includes a no-contest clause, on the grounds that their father lacked the mental capacity and was under undue influence when he signed his estate planning documents in March 2009.
Dan Reilly, a lawyer for the Patrick Bowlen Trust, said in a statement that it is “sad and unfortunate that Beth Bowlen Wallace and Amie Bowlen Klemmer have elected to contest their father’s plan and attack his personal health,” adding the lawsuit was the “latest effort in their public campaign to circumvent Pat Bowlen’s wishes.”
Pat Bowlen died in June at age 75 after a long battle with Alzheimer’s, two months before his induction into the Pro Football Hall of Fame.
Pat Bowlen put the trust in place in hopes one of his seven children would succeed him in running the team he purchased in 1984. In addition to the two daughters he had with his first wife, Sally Parker, Pat Bowlen had five children (Patrick, Johnny, Brittany, Annabel and Christianna) with his widow, Annabel.
Wallace, 49, announced in early 2018 she wished to succeed her father, and the trustees responded by declaring she was “not capable or qualified.”
Brittany Bowlen, 29, announced her intention last fall of becoming the next controlling owner of the team, and she’s set to join the team in November in a management position to begin that process.
The lawsuit by Wallace and Klemmer was filed one day before Brittany Bowlen’s wedding in Beaver Creek, Colorado, to lawyer Alex Kim.
Pat Bowlen originally set up his trust 20 years ago and the trustees ran the team after Bowlen stepped down in 2014 as he battled Alzheimer’s.
The trust has three weeks to respond to the lawsuit.
“The evidence in the courtroom will show Pat Bowlen was fully capable of establishing and understanding his trust and estate plan when it was created in 2009,” Reilly said.
He added that Wallace and Klemmer never raised the issue of mental capacity until after 2014 “when Ms. Wallace was privately told by the trustees that she was not capable or qualified to serve as controlling owner.”
Last month, Arapahoe County Court Judge John E. Scipione dismissed a lawsuit filed by Bowlen’s brother, Bill Bowlen, that sought to remove team president and CEO Joe Ellis, team counsel Rich Slivka and Denver lawyer Mary Kelley as trustees, claiming they weren’t acting in good faith or in his late brother’s best interests.
The court ruled in a separate case over the trust, however, that the court and not the NFL would decide the question of Pat Bowlen’s mental capacity when he updated his estate planning documents a decade ago.
“There is substantial and overwhelming evidence that Mr. Bowlen lacked the required capacity in 2009,” Giovanni Ruscitti, co-counsel for Wallace and Klemmer, said in a statement. “As a result, Ms. Klemmer and Ms. Wallace have filed a petition asking the court to decide that issue, the related issue of whether the 2009 trust — which is the document under which the trustees have derived their power and authority — is valid, and whether Mr. Bowlen was subjected to undue influence.”
In response to Bill Bowlen’s lawsuit, which they saw as an attempt by Wallace and Klemmer to challenge the trust, trustees asked the NFL to arbitrate the matter, and Commissioner Roger Goodell agreed, appointing ex-49ers executive Carmen Policy as arbitrator.
The NFL’s arbitration, minus the question of Pat Bowlen’s mental capacity, can proceed, but the arbitration would be rendered moot if the trust were declared invalid in court. A delay is likely until the latest lawsuit winds its way through the legal process.
On Aug. 30, the court sided with the trustees in denying Wallace and Klemmer’s request for an advisory opinion and a “probable cause determination” on their ability to challenge the no-contest clause in the trust without risking their inheritance.
By choosing to challenge the validity of the trust in court, Wallace and Klemmer are putting themselves at risk of being disinherited if they’re found in violation of the no-contest clause and the 2009 trust is upheld in court. Their rights as beneficiaries would bypass them and go to their children.
___
Follow Arnie Melendrez Stapleton on Twitter: http://twitter.com/arniestapleton
___
More AP NFL: https://apnews.com/NFL and https://twitter.com/AP_NFL

End of an era: Raiders prepare for likely final…