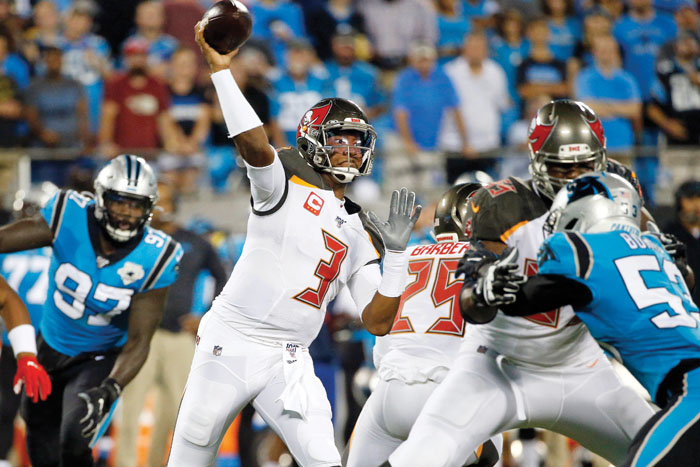 By STEVE REED AP Sports Writer
CHARLOTTE (AP) — Jameis Winston threw for 208 yards and a touchdown, Tampa Bay held Cam Newton in check and came up with a late goal-line stand and the Buccaneers beat the Carolina Panthers 20-14 early Friday to give coach Bruce Arians his first victory with the team.
Chris Godwin had eight catches for 121 yards and a touchdown, Peyton Barber ran for 82 yards and a score and the Bucs won despite converting only 2 of 12 first downs in the game that was delayed 25 minutes in first quarter because of lightning in the area.
Newton finished with 324 yards passing, but was held without a touchdown for the second straight game. He also fumbled again.
Newton couldn’t get the Panthers (0-2) into the end zone on the final drive despite numerous breaks. On fourth down play from the 2, the Bucs stopped Christian McCaffrey after he took a snap out of the wildcat formation to take over on downs.
The Buccaneers (1-1) got plenty of pressure on Newton with three sacks coming from Shaquil Barrett. They also held McCaffrey to 53 total yards from scrimmage after he racked up 209 yards and two touchdowns in the season opener against the Los Angeles Rams.
The Panthers failed to reach the end zone, only scoring on Joey Slye’s four field goals and a safety by Luke Kuechly. They are 0-2 for the first time since the 2013 season.
There were a few bizarre plays on the final drive, including a pass reception where D.J. Moore appeared to make a catch before the first-down marker. But when one official threw the ball to another to be spotted for the next play, the ball appeared to be moved ahead nearly a yard forward and the Panthers were given a first down without a measurement.
A short while later, Bucs cornerback Carlton Davis was flagged for a facemask penalty after a reception by Curtis Samuel, giving the Panthers a first down at the Bucs 11.
And then the Bucs were called for a delay of game for calling two consecutive timeouts.
Despite all of that, the Panthers still couldn’t score on a fourth and 1 from the 2. McCaffrey took the direct snap, faked a reverse to Samuel and race to the outside looking for the end zone but was shoved out of bounds.
“We felt good about the play, and at least picking up the first down,” Panthers coach Ron Rivera said.
NEWTON THROWS DEEP
After fielding plenty of questions about only attempting only one pass of more than 20 yards downfield in the season opener against the Rams, Newton connected on a 44-yard strike to Curtis Samuel late in the first quarter. It was one of handful of deep balls the quarterback threw.
JEERS TO CHEERS
After fumbling his first two punt return attempts, Ray-Ray McCloud was greeted with sarcastically cheers as he fielded his third punt cleanly. But the jeers quickly turned to cheers when McCloud raced up the middle of the field for a 39-yard return.
BURNS GETS FIRST
Panthers first round draft pick Brian Burns recorded his first career sack in the second quarter.
SLYE GUY
Undrafted rookie Joey Slye made his first three field of the night, including a 54-yarder and is now 5 of 6 on the season in place of the injured Graham Gano.
NEWTON ON THE RUN
Newton is the NFL’s third-leading rusher as a quarterback, but through two games he has minus-2 yards on five carries and two fumbles)
INJURIES
Buccaneers: Linebacker Devin White left the game in the first quarter with a knee injury and cornerback Jamel Dean suffered a lower leg injury in the third. Neither player returned to the game.
Panthers: None reported.
UP NEXT
Buccaneers: Host New York Giants on Sept. 22.
Panthers: At Arizona on Sept. 22.
___
More AP NFL: https://apnews.com/NFL and https://twitter.com/AP_NFL