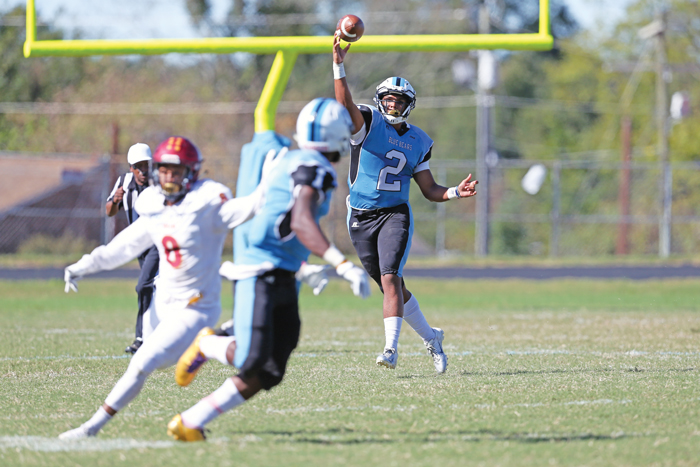 Kickoff for the game, Livingstone’s West End Classic, is set for 4 p.m., different from the Blue Bears’ traditional 1 o’clock starts.

Livingstone opened last Saturday night, with a 24-13 win at Clark Atlanta. ECSU is 0-1, having lost to FCS opponent Hampton, 65-7, on Aug. 31. The Vikings’ home opener against Allen was postponed by the threat of Hurricane Dorian last weekend.

Coach Daryl Williams’ Blue Bears fell behind Clark Atlanta, 13-0, but stormed back behind the play of quarterback Miles Hayes.  The 6-3, 220-pound sophomore earned CIAA Quarterback of the Week honors by completing 13 of 22 passes for 271 yards and three touchdowns. Hayes, who threw no interceptions during the game, deflected the credit.

“I just try to keep accolades as they are and focus on getting wins,” Hayes said on Wednesday. “It’s a team game. No one person is going to win the game. A lot goes into that award — the OL blocking, backs running the ball, play-action, receivers running the correct routes and then, catching the football.”

Despite the award, Hayes, who started six games as a true freshman in 2018, knows he and the team could have played better.

“We’ve have a tendency to start slow and that’s something that we’ve been working to improve on,” said Hayes. “Not just taking a blow and then giving our own, but to give the first blow as soon as the game starts. We started slow again last week, but we came together fast, which is a good sign. So, it was real exciting to see us come back so quickly after an adverse start.”

Hayes fired scoring passes to receivers Anthony Faraimo and Anthony Brown in the second quarter, giving the Blue Bears a lead they would never relinquish. In addition to extra points, kicker Antoine Akundu booted a 34-yard field goal just before halftime, for a 17-13 advantage at intermission.

Hayes connected for his third TD pass late in the third quarter, a 44-yard toss to Daveon Howard, closing out the scoring. Livingstone closed out the game with a strong ground game, behind running back DJ Bethune’s 86 yards on 18 carries.

“We had a good mix of run and pass.” said Hayes. “The run opened up the pass and I felt more comfortable in the pocket. By relying on the running game, I felt like I didn’t have to do too much or force things, like I might have last year.

“Having last season to learn and get my feet wet, it’s allowed me to settle down and just play the game,” continued Hayes. “I want to be a well-rounded quarterback that can do everything when called upon.”

Hayes is a Miami native but his family moved to the west coast of Florida, where he lived in Port Charlotte and North Port. Halfway through high school, Hayes returned to Miami, attending Doral Academy. He was just 18 years old when he arrived at Livingstone last year.

“Miles played good last week, but his fundamentals could have been better, so we’ve been working on those this week,” said Williams, himself a former college quarterback. “But I’m proud of the way Miles and the team responded from being down 13-0, keeping their composure and coming back to win.”

Hayes said that even though leading receiver EJ Ransom graduated, the team still has a strong group at that position.

“It’s been the passing of the torch, so to speak, from EJ to our current seniors,” Hayes said, speaking of Anthony Faraimo, Jordan Cartwright, Deandre Vickers, Cory Hall and Howard. “I know that they want to be the best receiving corps in the CIAA.

“Our offense is a multi-changing, so one week, this guy may be the player of the game, but the next week, someone else could have the hot hand,” continued Hayes. “We just listen and follow Coach Williams’ game plan and try to execute to the best of our abilities.”

Turning to the defense, Williams said that overall, that unit played well at Clark Atlanta, holding the Panthers scoreless over the game’s final 44 minutes. Defensive backs Walter Watkins and James Douglas intercepted passes in the win.

Douglas, a freshman, was also honored by the CIAA, as the Rookie of the Week. Douglas tallied eight total tackles (four solo), including 2.5 tackles for loss, two of which were QB sacks. He also forced a fumble and had a pass break-up as the Blue Bears’ defense gave up just 258 total yards, including 99 yards rushing.

As far as facing the Vikings on Saturday, the LC coach knows it will be a battle.

“I think it’s an even match and execution will determine the winner — and it may come down to which team doesn’t turn the ball over,” said Williams. “But we’re really looking forward to playing at home this week and hope the later kickoff will help build the crowd a little for us.”

Hayes added that the team is trying to stay humble. “We know that in one week, you can go from being a hero to being a zero,” he said. “So, it’s really a ‘let’s go 1-0 every week’ kind of thing. Just try to execute this week and do what we put in the hard work to do.”

NOTE: The series with Elizabeth City State has not been kind to the Blue Bears. The Vikings have won 32 of the 42 games, which date back to 1939. LC won that first game, 26-6. ECSU has a current seven-game winning streak in the series and won the last meeting in 2015, 41-6, in a driving rainstorm at Alumni Memorial Stadium. The Blue Bears won in 2003, 19-0, their last victory in the series.