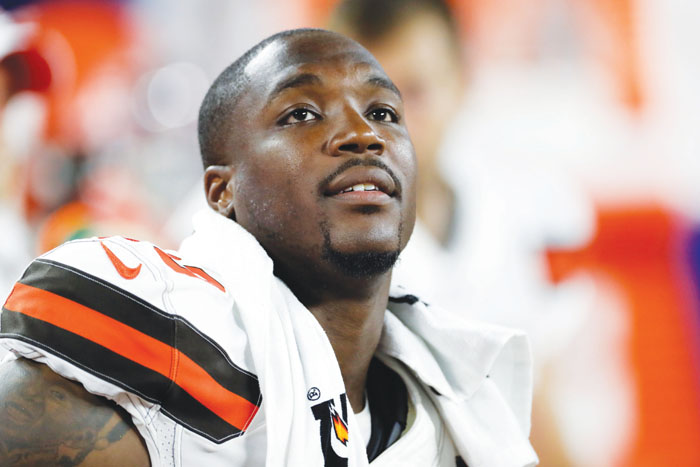 FILE - In this Aug. 8, 2019, file photo, Cleveland Browns defensive end Chris Smith (50) sits on the sideline during the first half of an NFL preseason football game against the Washington Redskins in Cleveland. Petara Cordero, the girlfriend of Smith has been killed in an accident early Wednesday, Sept. 11, 2019. The team said Cordero, 26, died when she was struck by an oncoming car on I-90 West at around 2 a.m. after she and Smith had pulled to the side of the road when the car he was driving had a tire malfunction and spun out. Smith is from Rowan County, having starred at West Rowan High School, before graduating in 2010. (AP Photo/Ron Schwane, File)

CLEVELAND (AP) — The girlfriend of Cleveland Browns defensive end Chris Smith was killed in a roadside accident that happened after his car spun out on the highway.

Smith is from Rowan County, having starred at West Rowan High School, before graduating in 2010. He continued his education and football career at the University of Arkansas, prior to entering the NFL.
The team said Petara Cordero, died when she was struck by an oncoming car on I-90 West at around 2 a.m. Wednesday. Cordero was a passenger in Smith’s Lamborghini, which had a tire malfunction and he struck the median wall.
Cordero exited the vehicle and was standing on the road’s shoulder when a car driven by a 47-year-old woman smashed into the passenger side of Smith’s car.
According to a Cleveland police report provided by the Browns, Cordero was transported to Fairview Hospital and pronounced dead.
Police said other the driver admitted drinking. No charges have been filed and toxicology reports are pending.
Smith was not impaired or injured, police said.
Browns owners Dee and Jimmy Haslam offered their condolences to Smith, who signed as a free agent with the team last year. He played one season in Cincinnati and three in Jacksonville.
“Words cannot describe the sorrow we feel for Chris following the loss of his girlfriend, Petara,” the Haslams said.
“Our entire organization mourns with Chris, his family and the Cordero family. We will do everything possible to offer them our support, comfort and any resources in this most difficult time.”
Cleveland’s players were told of the accident during a meeting and coach Freddie Kitchens visited Smith at his home.
Smith and Cordero recently celebrated the birth of a daughter, Haven Harris Smith. He had been excused from the team’s exhibition against Indianapolis last month for the baby’s arrival.
Smith played in Sunday’s season-opening loss to Tennessee. The Browns play at the New York Jets on Monday night.

Smith visits Rowan County frequently during the NFL offseason, including on May 24, 2018, when he donated $40,000 to Rowan-Salisbury student-athletes and $5,000 to the Essie Mae Kiser Foxx charter school in East Spencer.

Smith usually helps with the free football camp of Javon Hargrave — another NFL player from Rowan County. Each summer, Hargrave, a member of the Pittsburgh Steelers, hosts the camp at North Rowan High School, his former school.

Reportedly, Cordero is from Charlotte and her family still lives there.