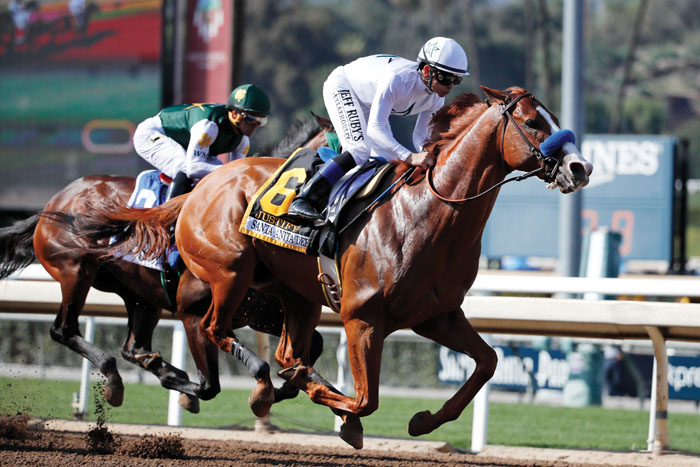 FILE - In this April 7, 2018, file photo, Justify, ridden by Mike Smith, gallops past Bolt d'Oro, left, with jockey Javier Castellano, during the Santa Anita Derby horse race at Santa Anita in Arcadia, Calif. Justify won the race, and Bolt d'Oro came in second. The New York Times says Justify won the 2018 Triple Crown after a failed postrace drug test at Santa Anita that could have kept the horse out of the Kentucky Derby. The newspaper reported Wednesday, Sept. 11, 2019, that Bob Baffert-trained Justify tested positive for the drug scopolamine after winning the Santa Anita Derby. Justify went on to win the Derby and took the Preakness and Belmont stakes to complete the Triple Crown. (AP Photo/Jae C. Hong, File)

Baffert said Thursday that he “unequivocally” rejects the implication he’d give Justify or any other horse scopolamine, which the colt tested positive for after winning the Santa Anita Derby in April 2018.

The New York Times reported Justify tested positive for the substance and that the California Horse Racing Board did not adequately investigate the matter. Justify was allowed to continue racing and won the Kentucky Derby, Preakness and Belmont Stakes to become the 13th Triple Crown winner in history.

“Damn shame this great horse, connections and me have to be put through all this,” Baffert said in a text message to The Associated Press. “It was obvious environmental contamination. It’s been a known problem in California.”

California Horse Racing Board equine medical director Rick Arthur told the AP that the amount of scopolamine in Justify’s blood was “minuscule” and that he recommended based on his findings that the case not be prosecuted. Scopolamine, also known as hyoscine, can be used to treat motion sickness in humans and in limited equine cases can relieve intestinal spasms, though it can be toxic to horses.

Scopolamine, which has been nationally downgraded from a class 3 to a class 4 level substance in horse racing, can come from jimson weed that grows wild in California. The Association of Racing Commissioners International’s Uniform Classification of Foreign Substances guidelines say class 4 drugs “comprise primarily therapeutic medications routinely used in racehorses (that) may influence performance but generally have a more limited ability to do so.”

Arthur said seven horses from four different trainers at Santa Anita were found to have some level of scopolamine or atropine in their systems during the period when Justify tested positive and he recommended that the two cases that crossed the threshold — Justify and another — be dismissed.

“It was a conclusion certainly of the executive staff that that was the appropriate and correct way to handle the case,” said Arthur, who is equine medical director at the veterinary school at the University of California at Davis, and is assigned to but not paid by the California Horse Racing Board. “I’m the primary adviser on drug testing to the board, and my opinion is it would have no pharmacological effect.”

After Baffert called on racing officials in Kentucky, Maryland and New York to release Justify’s test results, each one said everything came back negative.

The Maryland Jockey Club said it was “informed that all of those tests came back negative for any illicit substance or for the overages of any prohibited medication” for Justify and the other horses who ran in the 2018 Preakness.

New York State Gaming Commission director of communications Brad Maione told the AP all of Justify’s blood and urine samples tested by the New York Equine Drug Testing and Research Laboratory at the Belmont Stakes came back clear “with no evidence of impermissible medication.” Veterinary records from the 2018 Belmont showed Justify was treated orally for dehydration the day before the race.

Justify did not run another race after winning the Triple Crown and was retired. Baffert trained the only two Triple Crown winners in the past three decades: Justify in 2018 and American Pharoah in 2015.

“Justify is one of the finest horses I’ve had the privilege of training and by any standard is one of the greatest of all time,” Baffert said in a statement. “I am proud to stand by his record and my own.”

Baffert’s attorney, W. Craig Robertson, wrote a letter addressed to the Times defending Baffert and saying the California racing board did the correct thing by not pursuing a lengthy investigation.

While defending his own actions, Baffert said he had no input into or influence on decisions made by the California board, which came under fire for treating this situation differently from past precedent. Upon notification of the positive test result, Robertson told the board to deal with him and not Baffert from that point forward.

“Given all the foregoing facts, I was confident that Mr. Baffert would ultimately prevail if the CHRB pursued the matter,” Robertson wrote. “This left the CHRB with two choices — either pursue a frivolous case that had no merit at great taxpayer expense, or exercise reason and common sense and decide to take no further action.”

In a news release Thursday, Animal Wellness Action executive director Marty Irby called for drug testing to be “conducted and overseen by impartial operators and not by industry players with a vested interest in looking the other way.” The Times reported the chairman of the California board owns an interest in horses trained by Baffert.

The California Horse Racing Board said in a statement emailed to the AP: “We take seriously the integrity of horse racing in California and are committed to implementing the highest standards of safety and accountability for all horses, jockeys and participants.”