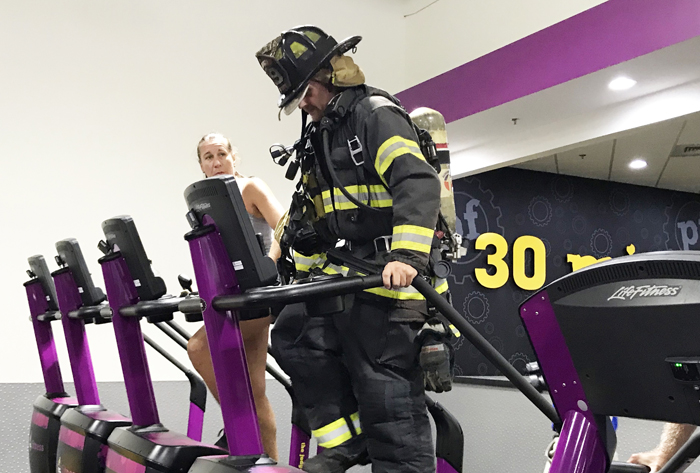 SALISBURY – Liberty Volunteer Fire Department firefighter Jesse Moore on Wednesday aimed to climb 110 flights of stairs on a stair climber at Planet Fitness in honor of the Sept. 11 attacks.

Wearing his turnout gear, weighing about 60 pounds, Moore wanted to honor firefighters, first responders and those who lost their lives in the terrorist attacks. The number is a reference to the two identical, 110-story Twin Towers of the World Trade Center.

On Sept. 11, 2001, the Islamic terrorist group Al-Qaeda attacked the United States, gaining control of four commercial airplanes and crashing them into the World Trade Center buildings and the Pentagon. Another plane crashed into a field in Shanksville, Pennsylvania.

On that morning, nearly 3,000 people died. Even more firefighters, police officers, emergency medical responders and office workers have died since the attacks from illnesses related to the destruction.

Americans mourn the loss of victims each year and hold ceremonies to commemorate the lives and legacies of those lost in the attacks.

According to Moore, a memorial stair climb usually takes place each year in Charlotte. He completed his in Salisbury because he was not able to go there. He started the climb about 3 p.m.

“We just do something every year to try and remember and to never forget. There are people doing it all over the country today,” Moore said.

The 2019 Charlotte Firefighters 9/11 Memorial Stair Climb is set for 9 a.m. Saturday at the Duke Energy building. It raises money for the National Fallen Firefighters Foundation.