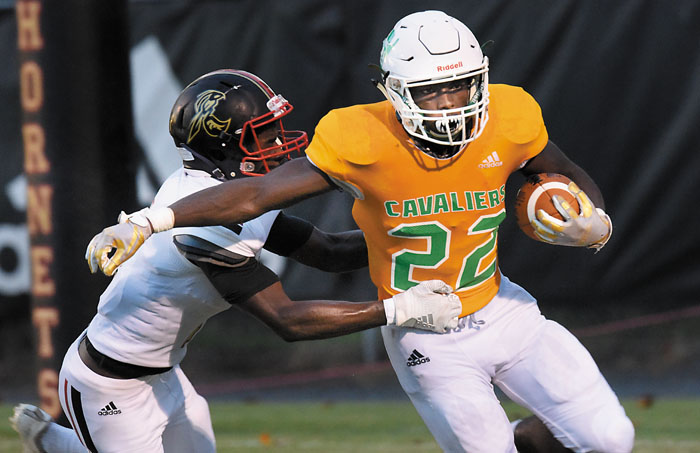 North’s Rowan home game with Carson on Friday is an endowment game, so only NCHSAA passes will be honored.

North, looking to get its season turned around, might be facing the right opponent. North has won its last three meetings with Carson.

“Hopefully, we can get the offense untracked,” North head coach Ben Hampton said. “We just need guys to make a few big plays and the get the momentum swinging in a different direction. We’ve got to quit waiting around on our luck to change.”

North is 0-3 for the first time since the 2010 season, although there’s still time to right the ship. With its stout defense, North is still expected to be one of the better teams in the 1A Yadkin Valley Conference.

The Cavaliers played short-handed at Lexington last week in a 14-8 loss.

Starting quarterback Kyree Sims had wisdom teeth removed on Thursday and was unavailable. He was replaced by jayvee quarterback Kaleb Burlesyon, who threw a touchdown pass to James Gladden for North’s first offensive TD of the season.

North also was without the services of all-county DB/returner Zay Davis at Lexington. He was out with a shoulder problem.

Hampton said he expects to have Sims and Davis back on the field on Friday, along with center/guard Kendal Reid. The 290-pound Reid is a key component of North’s offensive line, but hasn’t played yet this season.

North’s defense prevented Lexington from making a single first down in the second half. Hampton said lineman Brandon Jefferson and DB Jaharion Graham were “all over the place.”

North is young compared to some of the teams in the county.

“We returned only seven of 22 starters,” Hampton said. “Our young guys have been big-eyed.”

Carson quarterback Alex London suffered a concussion in Friday’s 49-0 loss to Northwest Cabarrus. He’s expected to return soon, but he’s definitely out for this week’s game at North Rowan.

Potential replacements are Hunter Burris, who has been shining as the signal-caller for the Carson jayvees, and Zeb Burns, a quick athlete who is normally a cornerback/receiver.

Carson (1-2) has been shut out in back-to-back outings for the first time since its early days in 2007 and faces another stingy defense this week when it goes to Spencer.

When the ADM (Average Daily Membership) figures were released last November for the football playoffs, it was a reminder that while it still competes in 3A (at least through the 2020-21 school year), East is now a 2A-sized school. East’s ADM of 968 was almost identical to South Rowan’s (972). South competes in the 2A Central Carolina Conference.

Those changing numbers are evident in the number of bodies in football uniforms for East. Head coach John Fitz says the varsity roster has 30 players, but injuries have knocked out a few of those.

“I’ve always been a believer in two-platoon football, but we don’t have the numbers for it,” Fitz said. “When you include special teams, almost everyone on our team is involved in more than one thing. We cross-train our guys to play both ways. There was a time when we’d have our offense practicing one thing and our defense practicing something else, but now we have offense days and defense days. Our staff and our guys are doing a good job with it.”

East didn’t turn it over, only had to punt once and didn’t have a penalty in the second half.

After Pinckney sat down early in the fourth quarter, Jaden Thompson got 12 carries for 85 yards and scored a touchdown.

East quarterback Logan Forbis may not put up huge stats on a run-first team, but Fitz is elated with how he’s played so far. Forbis is completing 56.4 percent of his passes. He has four TD passes and only one interception.

“He’s improved tremendously and is doing a great job of managing games for us,” Fitz said. “He’s been in my weightlifting class since the second semester of his freshman year and he’s gotten    stronger and faster.”

East is off on Friday and also planned to rest on Thursday.

It’s been a tough week to practice for all teams, with 95-degree temperatures on Monday and 90 on Tuesday.

Boys basketball coach Mike Gurley returned to the mic for P.A. for Friday’s game and provided his usual brand of boisterous entertainment.

As the Falcons made their way down the hill into the stadium, Gurley yelled, as he always does, “And here come your Falcons! The warriors from Woodleaf, the men from Mount Ulla and the champions from Cleveland!”

The Cox Mill loss was a difficult one for the Falcons, who pushed Cox Mill around for a half, but lost mostly because of five turnovers.  West is now 1-2 and has Davie and A.L. Brown coming up. They’ll be underdogs in both of those games.

West made a concerted effort to get the ball into the hands of playmaker Jalen Houston on Friday. Houston had West’s first rushing carry of the night and was very involved in the passing and return games.

Linebacker Baiden Suddarth made the loudest tackle of the night after a great hustle play. The crowd roared its appreciation, but the big hit came well downfield after a big pass play by Cox Mill.

Federico Cruz kicked two field goals for the Falcons. He also was short on a  51-yard attempt as the first half expired.

“There’s nothing wrong with field goals,” West head coach Joe Nixon said. “Sometimes you have to  take the three points and keep playing.”

Michael Gonsalves had a career rushing game with 27 carries for 179 yards, but he did almost all of his damage (20 for 147) before halftime.

Sophomore Noah Loeblein threw his third TD pass of the season and has passed for 365 yards.

The Hornets used the off week to heal banged-up players and should be ready to take on Thomasville on Friday at Ludwig Stadium in the Central Carolina Conference opener for both teams.

It has been a tremendous, low-scoring, head-knocking series in recent years, and Friday’s game should be no exception. Four of the last six Thomasville-Salisbury matchups have been decided by a field goal or less. Since the series resumed in 2009, Thomasville has won six times, while the Hornets have won five.

Salisbury coach Brian Hinson is excited that the Hornets will finally get to play a jayvee game this week.

While the Hornets (2-0) have only played two games, Patrick Taylor leads the county in receptions and receiving yards.

Mike McLean rushed for 160 yards against Carson in Salisbury’s most recent outing, the fifth 100-yard game of his career.

Salisbury was ranked ninth by the state’s media in the first AP poll released on Tuesday. The Hornets were the only Central Carolina Conference team in the top 10. North Davidson and Ledford have dominated the league the past two seasons, but the Hornets appear to be good enough defensively to challenge for the title this time. Salisbury paces the county in rushing defense, total defense (yards allowed) and scoring defense.

Head coach Daniel Yow said the standouts for the Raiders (0-2) in the loss to East Rowan were cornerback Jackson Deal on defense and Brayden Garrett, who rushed 13 times for 58 yards, on offense.

South’s Nathan Chrismon has caught four passes and has scored on all of them — three touchdowns and a 2-point conversion. He’s second in the county in scoring.

South didn’t turn the ball over in the loss to East Rowan. That’s a step forward. South had three turnovers in its opener against Carson.

This is a critical week for South’s season. The Raiders open Central Carolina Conference play on Friday with a 50/50 game at East Davidson. South won against East Davidson in 2018, but lost to the Golden Eagles in 2017.

After an off week, the Wonders (1-0) play at home against Mooresville on Friday. It’s been a competitive series. The teams have alternated wins in the last six meetings.

There will be a ceremony honoring the 61st anniversary of Memorial Stadium.

The 50-page 2019 A.L. Brown football program is dedicated to Bob Boswell, who passed away in June. Boswell is credited with turning a football program that had been up and down into a perennial power during his coaching tenure from 1976-88.

Davie plays in the Central Piedmont Conference, one of the state’s most competitive leagues.

East Forsyth and West Forsyth cracked the top 10 in the first AP media poll that was released on Tuesday. Reagan received votes.

Davie QB Nate Hampton has thrown for 751 yards and eight touchdowns in the past two weeks.

Davie brings an exciting team to West Rowan on Friday for its 49th meeting with the Falcons. West ran off seven straight wins in the series from 2009-2015, but Davie holds a 28-18-2 edge al-time and has won two of the last three meetings. West didn’t beat Davie in the entire decade of the 1970s, although the teams did tie in 1975.

Davie has extreme defensive splits. The War Eagles have been giving up a ton of passing yards, but they are good at stopping the run. West has been primarily a running team.