EAST SPENCER — Character, strength and honor are the three words East Spencer Mayor Barbara Mallett wants people to think of when they think of her.

Mallett is seeking re-election for her fifth term as mayor. 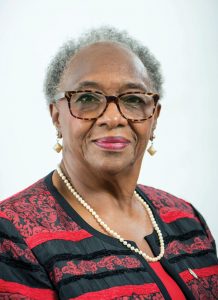 “We have seen tremendous change in the landscape in the town of East Spencer,” Mallett said. “I’m looking forward to the next two years to continue to bring a fresh image to the town.”

Mallett said she wants to continue on the track the town board has begun by securing a number of grants that have moved development projects forward, including the Royal Giants Park redevelopment as well as a $2.4 million grant for a water project.

She said continuing to look at redevelopment opportunities would not only be good for the town but Rowan County as well.

Mallett said she’s had a successful track record when it comes to executive leadership and management as mayor. Under her leadership, the town has received more than $10 million in grants.

She wants the opportunity to continue to serve residents of East Spencer and make sure that the board shows “fiduciary responsibility to be efficient and responsible to our taxpayers,” she said.

“East Spencer has a great Board of Aldermen,” she said. “Not one council member throughout these years has a political agenda or personal gain – only to serve.”

Her four top priorities are to see the completion of major projects that include:

• A water-sewer agreement with the city of Salisbury.

“As directed by the Board of Aldermen at our retreat, we must in the next few years come to some agreement about our water rates for our survival for economic development,” Mallett said.

• The gateway plan for development of Exit 79 on Interstate 85 that includes the Andrews Street corridor, Choate Road and the vicinity. The plan was adopted in March 2015 and includes zoning, options for the purchase of property and utility planning. The area in the plan covers more than 250 acres.

• A Community Development Block Grant for infrastructure. The $1.9 million grant will eliminate one pump station and rehabilitate sewer lines. The town was awarded the grant in May, and the project is expected to be completed in 2021.

“It’s time to consider the replacement of our housing stock, because in the past few years we have eliminated 50 units of housing because of blight conditions,” Mallett said.

She said the town must continue to host activities like Community Day and Food Truck Friday to foster community engagement, improve the quality of life and bring people downtown.

“Have we been able to do everything right? Of course not,” she said. But the town does have partners, investors and supporters “who see the potential for growth.”

Mallett is a native of Morganton and is the second oldest of eight children born to Robert and Annie Avery. She graduated from Olive Hill High School and attended Livingstone College. Mallett has an associate degree in accounting from Rowan-Cabarrus Community College and a bachelor of science degree in business management from Shaw University.

Mallett is a member of Southern City Tabernacle AME Zion Church, where she is a class leader, deaconess and president of the lay council, and trustee.

Mallett has been married to Gary Mallett for 53 years and has two daughters, Crystal and Tarsha Mallett, and two grandchildren, Amber Carter and Cameron Mallett.

Mallett said daily meditation is an essential part of her life, and she’s confident that reading the Bible every morning helps her stay focused.