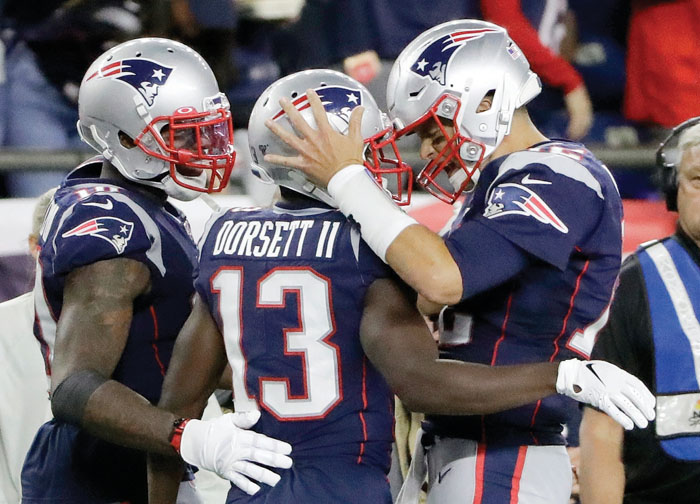 NEW YORK (AP) — That was quite the opener for the New England Patriots.

The defending champs dominated the Pittsburgh Steelers 33-3 on Sunday night.

The Patriots not only remained on top of the latest AP Pro32 poll , but it was nearly unanimous.

New England received 11 of the 12 first-place votes for 383 points in balloting Tuesday by media members who regularly cover the NFL.

“The Patriots typically build momentum as the season goes on, but this year’s team picked up right where it left off, with a strong defense and an offense that doesn’t even look like it needs Antonio Brown,” said Jenny Vrentas of The Monday Morning Quarterback.

Next up for the Patriots: the rebuilding Miami Dolphins, who lost their opener by 49 points.

In fact, the top five in poll remained unchanged, with the Kansas City Chiefs, New Orleans Saints, L.A. Rams and Philadelphia Eagles following the Patriots after wins in Week 1.

The Chiefs earned the other first-place vote and had 365 points.

“Reigning MVP Patrick Mahomes picks up where he left off last season with a monster game against the Jaguars. He might be the most enjoyable player to watch in the entire league,” Newsday’s Bob Glauber said.

“The Texans just learned what the rest of the NFL has known for years — never leave Drew Brees enough time to beat you,” said Ira Kaufman of Fox 13 in Tampa, Florida.

The Dallas Cowboys climbed three spots to No. 6 after pounding the New York Giants 35-10. They’ll face another NFC East foe on Sunday when they head to Washington.

The Minnesota Vikings climbed four spots to No. 7 after topping the Atlanta Falcons. They will try to move to 2-0 when they head to Lambeau Field to face the Green Bay Packers.

The Baltimore Ravens also jumped four places to No. 8 after crushing the Dolphins 59-10 and will welcome back Terrell Suggs when they host Kyler Murray and the Arizona Cardinals.

The Los Angeles Chargers remained at No. 9 after needing overtime to get past the Indianapolis Colts 30-24.

Despite winning their opener, the Seattle Seahawks dropped three places to round out the top 10.