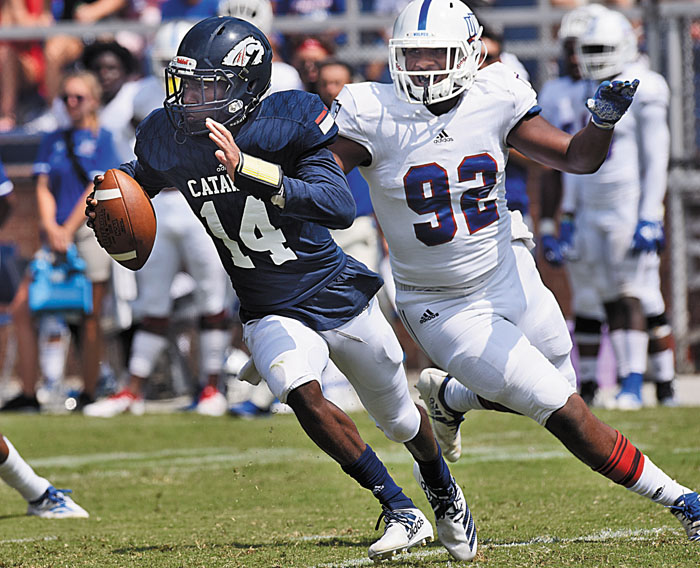 SALISBURY — Catawba found out during Saturday’s 37-9 loss to West Georgia that it has two promising sophomore quarterbacks.

It’s a nice problem to have.

Ken Avent III, you probably know about. Avent earned the starting QB designation last season as a redshirt freshman and while he threw 11 picks he never did anything to make fans second-guess that decision. He demonstrated piles of potential, accounting for 19 touchdowns (12 passing, 7 rushing). Starting the last seven games after Reid Carlton went down with an injury, he threw for nearly 200 yards per game while using his legs to become Catawba’s No. 2 rusher.

Avent’s that quarterback coaches and coordinators are always looking for. He wants to get things done from the pocket, but if he has to improvise on the move, he has the head to make a prudent decision and the mobility to make a play.

Kendall Davis, you probably don’t know about. Catawba welcomed Davis into the program prior to the 2018 season after he redshirted in 2017 at the University of North Alabama. Davis threw just one pass for the Indians in 2018 (a 20-yard completion against Limestone).

Avent held off Davis for the starting assignment throughout the spring and preseason, not because Davis wasn’t pretty impressive, but because Avent was close to perfect. Avent has gained speed since he came to Catawba, while adding solid pounds and maturity. He’s a leader, he can get the ball out of his hands quickly, and, as the son of a quarterback/coach, he reads defenses like an offensive coordinator. Catawba entered this season firmly believing Avent has All-South Atlantic Conference accolades in his future.

But Avent was injured last Tuesday in practice. It’s a left foot injury and is believed to be a short-term problem, but you never know about injuries. They can linger. They can be worse than originally hoped.

The coaching staff called in Davis last Wednesday and informed him he’d be starting against 15th-ranked West Georgia.

“I’ve always prepared every day at practice with the mindset that I’d be playing in the next game,” said Davis, who has built a reputation as a hard worker in the weight room and the film room. “We all have that next-man-up mentality. Yes, it was my first college start, but I was confident I could do the job.”

Catawba’s coaching staff didn’t ask Davis to go in there and throw it around against a big, tough defense. He was asked to manage the game. He threw only 11 times, completing five for 92 yards. Two of his completions were beauties, perfectly thrown balls to Chylon Thomas, who had streaked behind the defense. There was a 34-yarder for his first college touchdown pass and a 41-yard completion that set up a Clayton Crile field goal.

“That first series, I had a lot of butterflies,” Davis said. “But our offensive line did a very good job and we were able to run the ball effectively, even though West Georgia was stacking the box. Our running game was encouraging. When you can run it, that makes it easier to throw it.”

Davis is wirier and leaner than Avent.  He’s built like a receiver and runs and jumps like one. He has 4.6 speed and a 39-inch vertical. Davis ran eight times for 35 yards against West Georgia.

“There was some good on Saturday,” Davis said. “But there also was some bad. Two turnovers.”

There was a lost fumble on a scramble, and there was a second-quarter pick-six that was one of the turning points in the game. That was the bad stuff.

“On the pick, I rolled right, and their guy just jumped the route and caught it,” Davis said. “Then he made a guy miss, and he had a touchdown. I can’t take it back, but I can learn from it.”

Davis, an Alabama Crimson Tide fan, is mature, calm and poised for a young man who will turn 21 in October.

He has an intriguing background. His full name is James Kendall Davis, but he is called Kendall because his father is James. James Davis is in the North Alabama Sports Hall of Fame. A two-time All-America linebacker, he broke school and league records for tackles in 1989-90. After college, he went on to become a teacher, coach and principal.

Kendall started high school in Prattville, Ala., big-time 7A football. Prattville had a football roster of 146 players. Kendall was the jayvee quarterback as sophomore in 2014 when Prattville was ranked fifth in the state.

The Davis family relocated 30 miles north to Clanton, Ala., prior to Kendall’s junior year. It was a move made for all the right reasons, family reasons, to be close to his ailing grandmother. At Chilton County High in Clanton, Kendall blossomed into a star. He was being recruited by a lot of people. He shined at camps and made “Junior Day” visits to Missouri and James Madison. Georgia Southern and Arkansas State also were in the picture.

In high school, he competed in baseball and basketball as well as football and was a stellar student. As a senior, he signed with North Alabama, which had just played in the 2016 Division II national championship game and was making the transition to D-I football.

Now he could be a very important part of the Catawba program.

“We’ve learned from experience that we have to have at least two quarterbacks who are ready to play,” Catawba head coach Curtis Walker said. “Kendall hasn’t necessarily been getting equal reps with Ken Avent, but he’s been getting quite a few reps all along.”

While Walker is as optimistic as anyone that Avent’s injury proves to be a short-term setback, he believes in Davis and likely will count on him to carry more of the offensive load in the Indians’ second game.

“West Georgia has a very good defense, but Kendall did enough positive things Saturday that he maintained our faith in him,” Walker said.

“It will be easier for me on Saturday,” Davis said. “I’ll have a full week of taking reps as the starter. I’ll be more comfortable.”

Catawba’s depth chart for Winston-Salem State lists “Kendall Davis or Ken Avent III” as the quarterback, so while it appears probable that Davis will start Saturday, there’s also a chance that Avent may be ready to return. Walker said Avent is “day-to-day” and is being evaluated frequently.

Either way, Catawba should be fine at quarterback on Saturday.