Cam Newton still getting questioned about lack of deep passes 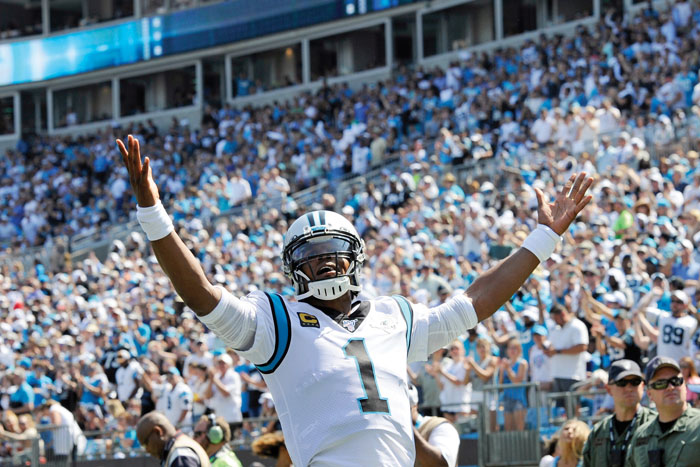 The 2015 league MVP joked that Panthers offensive coordinator Norv Turner must have Christian McCaffrey on his fantasy football team, a reference to the Carolina running back getting the bulk of action in Week 1 and racking up 209 yards from scrimmage and scoring two touchdowns — on 29 total touches — in Carolina’s 30-27 loss to the Los Angeles Rams.

Newton, meanwhile, did not throw or run for a TD against the Rams and only attempted one pass of longer than 20 yards.

“I think that is what it is,” Newton said with a big smile. “Doggone Norv gone and picked CMAC for fantasy, man. I should have went over and seen who he was drafting in his league.”

Then Newton paused and continued joking, “That’s probably why we ain’t throwing no deep passes, right? He didn’t pick me for his quarterback! Now it’s all making sense.”

All kidding aside, there is some question about why Newton still isn’t throwing deep even though he’s supposedly healed and under no restrictions from the coaching staff following arthroscopic surgery in January.

Newton attempted 38 passes against the Rams, but most were check-downs or passes underneath the coverage. His only attempt beyond 20 yards was a ball that sailed 25 yards through the air and over the head of wide receiver Curtis Samuel.

That’s reminiscent of last season when Newton struggled through a lingering shoulder injury that limited his arm strength. He rarely threw a pass of more than 20 yards in the second half of last season.

Newton has insisted his shoulder is fine entering Thursday night’s game against Tampa Bay and that it didn’t bother him in Week 1.

The 30-yard quarterback said he’s grown tired of people asking him questions about it, and his standard answer has been that he’s “taking what the defense gives him.”

Still, the questions will continue until he proves he can throw deep in a real game.

“You are only asking me because of my shoulder,” Newton said. “How about this, talk to the defensive coordinator for Tampa and ask if they don’t think I can throw the ball over 20 yards and see how far that gets you.”

“I don’t believe there is any doubt about it or he wouldn’t be playing,” Arians said. “Yeah, he has all of his tools and he’s ready to go.”

“I don’t want to find out in a game,” Arians said.

Shepherd will be eligible to return to the Jets’ active roster on Oct. 28, following New York’s game at Jacksonville.

Shepherd was inactive for the Jets’ season opener against Buffalo on Sunday. The second-year defensive lineman from Fort Hays State was a third-round draft pick by New York last year. The native of Ajax, Ontario, had 18 tackles and five quarterback hits while starting five of 16 games as a rookie.

Shepherd told NFL.com he failed two tests this summer — on June 27 and July 25 — while recovering from shoulder and groin injuries. He added that an MRI on his groin revealed a sports hernia, and his hunched posture after having that procedure resulted in two herniated disks in his back.

“All that was going on, I was coming off of a subpar season and a new coaching staff, new playbook, new everything,” Shepherd told NFL.com.

“In my mindset, I didn’t feel very confident with how everything had gone thus far. In my mind, I was so prepared to come into this offseason and have a successful offseason and train very hard. I felt that because of these limitations, I wasn’t going to be able to do that.

“I made a rash decision, an unwise decision and a selfish decision to look to certain PEDs in order to help me with that recovery process so I would be ready to go.”