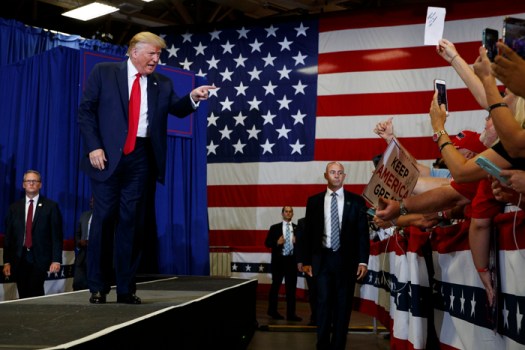 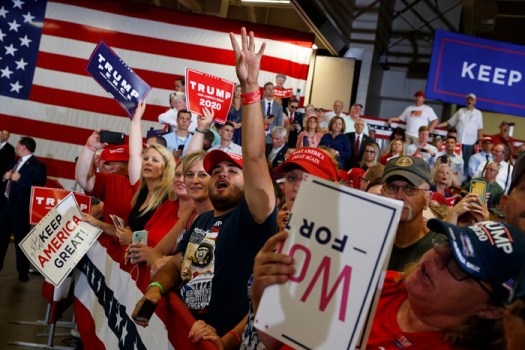 Supporters of President Donald Trump cheer as he arrives on stage at the Crown Expo Center for a campaign rally Monday in Fayetteville. Evan Vucci/Associated Press 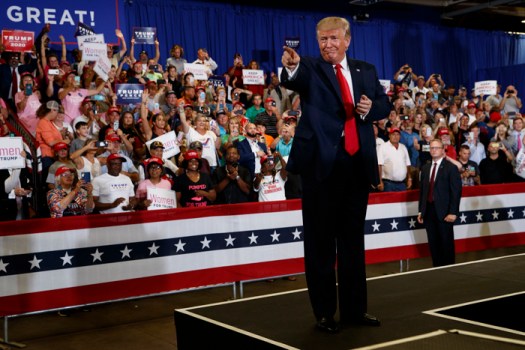 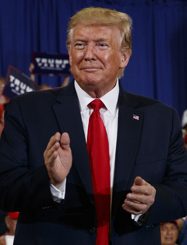 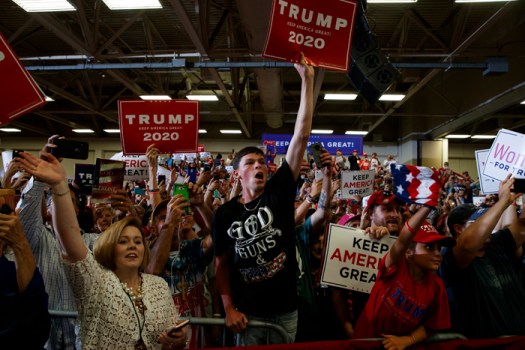 Supporters of President Donald Trump cheer as he arrives on stage for a campaign rally Monday in Fayetteville. Evan Vucci/Associated Press 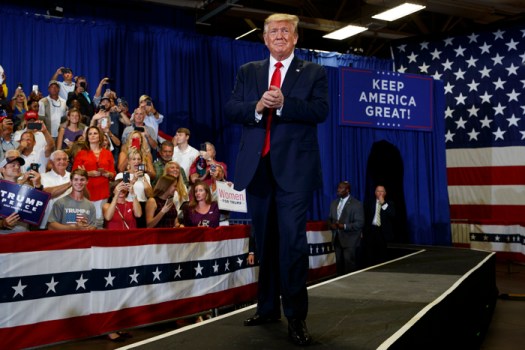 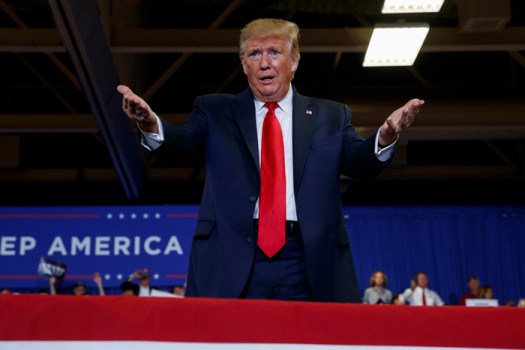 By Jonathan Lemire and Alan Fram

FAYETTEVILLE — Trying to use his political clout to push a Republican to victory in a special election, President Donald Trump used a Fayetteville rally Monday to paint a bleak picture of a nation that would be overrun with crime, poverty and immigrants if Democrats seize power in Washington.

Trump, appearing at his first campaign rally in nearly a month, went on the offensive in an effort to change a series of late-summer negative headlines over his slipping poll numbers, warning signs of an economic slowdown and a running battle over hurricane forecasts. He urged the Fayetteville crowd to vote today for Republican Dan Bishop, brandishing his usual incendiary rhetoric to declare from the stage that “tomorrow is a chance to send a clear message to the America-hating left.”

With an eye to his own re-election next fall, Trump touted his administration’s accomplishments but also urged voters to give him more time.

“That’s why we need four more years,” Trump said at the nearly 90-minute rally. “It’s got to seed — it’s a plant. It has to grow. It has to grow those roots. That’s why 2020 is just as important. Because they will try to take it away.”

Bishop faces Democrat Dan McCready in the 9th Congressional District. The results of the 2018 election were not certified because state officials ruled that absentee ballots were mishandled by a political operative working for Mark Harris, the former Republican candidate.

Trump’s appearance Monday emerged as a test of the president’s pull with voters. The special election could offer clues about the mindset of Republicans in the suburbs, whose flight from the party fueled the GOP’s 2018 House election losses.

The president enjoys wide popularity within his own party, but a GOP defeat in a red-leaning state could, when combined with a wave of recent bad headlines, portend trouble for his re-election campaign. But before leaving Washington, Trump dismissed questions of whether a poor result for the Republican candidate would serve as a warning sign in next year’s elections.

After a light rally schedule of late, the president had plenty of new material to work with.

Chief among them was the White House’s worries about the impact an economic downturn could have on a president who has made a strong economy his central argument for a second term. Trump advisers worry that moderate Republican and independent voters who have been willing to give him a pass on some of his incendiary policies and rhetoric would blame him — and, in particular, his trade war with China — for slowing down the economy.

Trump offered up a robust defense of the trade war with Beijing. He pushed for Congress to approve his new U.S.-Mexico-Canada trade deal. And he exaggerated the number of miles constructed on his promised border wall.

Trump has increasingly turned to culture-war issues to rev up his core supporters.

He’s leveled harsh criticism at majority African-American cities, like Baltimore, and delivered repeated broadsides against four liberal Democratic congresswomen of color. Those attacks have been cheered by Trump’s advisers, who are bullish on running a campaign critical of Democrats they cast as socialist and unpatriotic.

Monday’s rally was held just over 100 miles from the site of a Trump rally in July where “send her back” chants aimed at a Somali-born American congresswoman rattled the Republican Party and seemed to presage an ugly re-election campaign.
The chant was not heard Monday.

Previewing what will surely be his own reelection pitch, Trump repeatedly painted the Democrats as a party that has moved to the extreme left on issues like immigration, abortion and health care.

“You don’t have any choice. You have to vote for me,” Trump told the crowd. “What are you going to do: Put one of these crazy people running? They are so far left.”

“Your way of life is under assault by these people,” he claimed.

Trump also notably expressed his support for the Second Amendment against the backdrop of a recent spate of deadly mass shootings. It comes as congressional Democrats push for expanded background checks for gun purchases and as Trump has flip-flopped on the issue amid pressure from the National Rifle Association.

In the hours before the rally, Trump flew to coastal North Carolina to inspect the damage left by Hurricane Dorian, but bad weather forced officials to scrap those plans. Instead, he received a briefing on Air Force One where Democratic Gov. Roy Cooper told him that three deaths are connected to the storm and that some 3,500 people are without power.

The district has been held by the GOP since 1963. In 2016, Trump won the district by 11 percentage points. Should Bishop defeat Democrat McCready, it could give Trump room to assert that he pulled Bishop over the top. If McCready prevails or Bishop wins by a whisker, it will suggest GOP erosion and raise questions about Trump’s and his party’s viability for 2020.

“This will tell us if Trump can carry candidates through suburban districts or not,” said Sarah Chamberlain, president of the Republican Main Street Partnership, which represents moderate Republicans. If not, she said, the GOP must “work harder to address the concerns of suburban individuals, mainly women.”

Marshville residents Philip and Diane Ezzell, both 70, were near the front of the line Monday waiting to enter the Trump rally. Both attributed their support for Bishop to his backing by Trump. “We like his values, and he supports Trump,” Diane Ezzell said. “And we don’t want no socialist clowns.”

That was a reference to a TV spot by Bishop superimposing the faces of McCready and other prominent Democrats on swaying clown figures.

Cynthia Brown, of Fayetteville, 50, also attended the rally. Brown, who is black, said supporting Trump has been “a pretty lonely experience” for her. She added, “But that’s OK. I’m not a follower.”