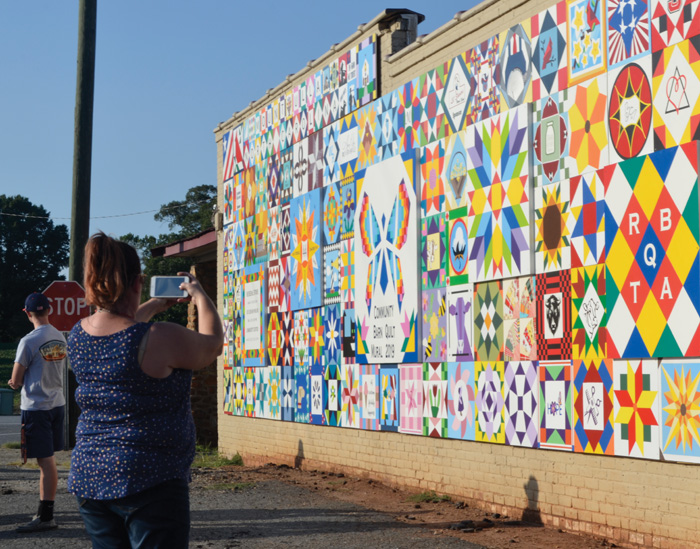 People traveled from miles to see the 504-square foot community barn quilt erected earlier this year on the back of West Rowan Farm, Home & Garden in the West Rowan area. Organizers say over 150 volunteers helped to create what is believed to be the largest community quilt in the United States. Shavonne Walker/Salisbury Post

BEAR POPLAR — On a previous trip to West Rowan Farm, Home & Garden, Michele Smith walked into the general store, pointed to a colorful barn quilt on the wall and said she wanted it.

On Saturday, Smith and her husband, Glenn, returned the store, located across the street from West Rowan Fire Department, to purchase her own commissioned barn quilt and enjoy the Community Barn Quilt Festival.

Earlier this year, more than 150 people donated their time to paint their squares as part of what is believed to be the largest community-created barn quilt in the United States. Many of the artists, their family, friends and barn quilt enthusiasts stopped by the store on Saturday to learn about the 504-square foot quilt that was erected onto the exterior wall of the general store.

It was not only an opportunity to celebrate the quilt and the hands that created it, but also a chance to raise funds to make it more magnificent.

The location of the quilt holds special significance to many in the Mount Ulla and Bear Poplar community because it is the former Steele Feed & Seed and the town post office. Many in the community worked at the store or had family members who worked there.

It sat unused for a number of years until Elsie and her husband, Brian, restored it with community help.

“It’s a testament to the community,” Elsie said.

Often, people would ask the couple what they needed. Then, all of a sudden, a box of nails would show up or people would pitch in to help with repairs.

One of the reasons the couple wanted to do the community quilt was because it would involve everyone. And on the back of each square is the story of who or what the quilt represents.

The couple hopes to make the barn quilt celebration a regular fall event. She said they are preparing to create commissioned barn quilts for the holidays.

In addition to the barbecue fundraiser on Saturday, organizers are also selling a book that features each quilt and the story behind it as well as a calendar with proceeds that will go to organizations that are part of the Barn Quilt Alliance. The alliance is made up of local nonprofits, organizations in the farming community and a historic society, said Adele Goodman, who compiled the book.

There are a number of barn quilts throughout the county and those who stop by the store will be able to see the map with all of the locations, minus private residences, listed. The event also included a raffle of a barn quilt, a silent auction and a live musical performance by bluegrass band Gaining Ground.

Kristin and Anthony Beaver marveled at the different patterns on the barn quilt, noting which ones they really liked.

Kristin was drawn to the square with a Raggedy Ann face on it because she had the Raggedy Ann doll as a child. Anthony spotted the insects and animals right away.

Kristin also liked that ‘In God We Trust’ was placed on the mural. She said it was “liberating” in a time where people are cautious of offending someone.

She added that looking at the mural was also a way to experience the local culture. The mural includes images of area organizations. And, she said, some are just nice to look at, some have poignant memories attached to them and others are patterns from family heirloom quilts.

Randy and Valeda Van Natta made their trip from Nashville, Ill. on motorcycle attend the festival. The couple have been traveling throughout the lower half of the United States.

Valeda heads up a 4-H Club that solely focuses on creating barn quilts. And someone in the club heard about the community quilt in North Carolina.

Valeda said she hopes to receive help from Elsie Bennett and Adele Goodman so that she can get her community involved in creating a large barn quilt.

Judy Lowry was one of those who helped with the local quilt, which she created from a memory of watching her father, Henry Wilson, work in the general store in the 1950s and 1960s. Lowry recalled paying 5 cents for a cold soda and splitting with her two siblings.

She hopes to show her mother, Tommie Cline, the book with her tribute.

“It’s the best of this community. It’s brought people together,” she said of the quilt.

Jo Hawes, her daughter, Jessie Graham and granddaughter Randi all had a square they painted for the mural.

“It makes you feel good to see it up there,” Hawes said of the three-generation contribution to the mural.

To have a custom barn quilt created in time for the holidays or to purchase a calendar or pre-order the book, contact West Rowan Farm, Home & Garden at 704-278-2800.