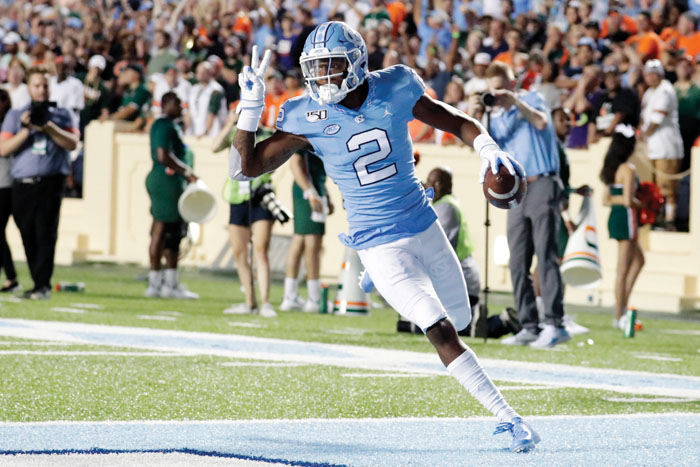 By AARON BEARD AP Sports Writer
CHAPEL HILL (AP) — Sam Howell found Dazz Newsome just inside the end zone for the go-ahead 10-yard touchdown with 1:01 left to help North Carolina rally past Miami 28-25 on Saturday night.
Howell’s perfect throw found Newsome dragging his toes inches from the sideline to cap a stunning clutch drive led by the true freshman. Howell also completed a 20-yard pass to Rontavius Groves on fourth-and-17 to extend the drive, which came after the Tar Heels had surrendered the lead on a Miami touchdown with 4:38 left.
Michael Carter’s diving-for-the-pylon 2-point conversion pushed the lead to 28-25, only to see Miami (0-2, 0-1 Atlantic Coast Conference) drive past midfield to set up a tying field-goal attempt. But Bubba Baxa’s 49-yard kick went wide left, sending several Tar Heels players sprinting toward the student section to celebrate even though there were still 5 seconds left.
Howell threw for 274 yards and two touchdowns for the Tar Heels (2-0, 1-0).
“We’ve got good players and that’s a credit to (former coach) Larry Fedora and his staff,” said new coach Mack Brown, who is starting his second stint with the Tar Heels. “The second part is he’s got ice in his veins. He’s very confident.”
THE TAKEAWAY
Miami: The Hurricanes were coming off a loss to No. 11 Florida on Aug. 24, a game that saw them surrender 10 sacks while committing 14 penalties in their first game under Manny Diaz. They were better in both areas Saturday. And after a slow start that put them in a 17-3 first-quarter hole, the Hurricanes controlled much of the game and pushed back ahead when Jarren Williams found Will Mallory for an 11-yard score with 4:38 left — only to see the Tar Heels respond with a drive that gave Miami its first 0-2 start since 1978.
“It’s a tough one to take for sure, but we’re all staying together,” Williams said. “We’re a team and we know we’ve got to work harder.”
UNC: The Tar Heels were coming off a close win against South Carolina in the opener, which provided a jolt of optimism considering they had closed out the kind of close game that they kept giving away a year earlier. This is sure to help that confidence even more under Brown, a Hall of Famer who built a top-10 program in his first stint here before coaching at Texas. Howell was unflappable in the closing moments, sending North Carolina to its first 2-0 start since 2014.
UP NEXT
Miami: The Hurricanes host Bethune-Cookman on Saturday in their home opener.
UNC: The Tar Heels visit Wake Forest on Friday in a nonconference game between league opponents.
___
More AP college football: https://apnews.com/Collegefootball , http://www.twitter.com/AP_Top25 and https://podcasts.apple.com/us/podcast/ap-top-25-college-football-podcast
___
Follow Aaron Beard on Twitter at http://www.twitter.com/aaronbeardap