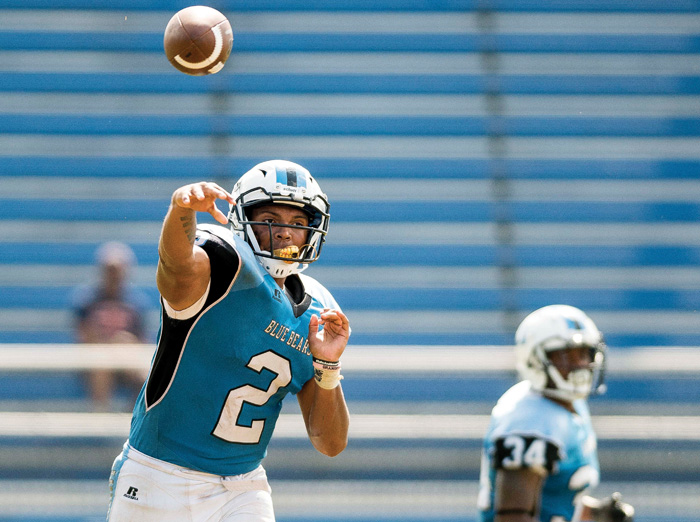 ATLANTA — Livingstone opened the season with a come-from-behind, 24-13 win over Clark Atlanta on Saturday night in college football action at Panther Stadium.

“The kids played well, and the coaching staff did a great job of having them prepared,” said Livingstone coach Daryl Williams. “It was a complete and total team effort. I’m real proud of the guys. Now, we’ll get back to work and get ready for Elizabeth City (State).”

Hayes, who started as a freshman in 2018, first connected with senior receiver Anthony Faraimo on a 68-yard scoring strike, with 9:02 remaining in the first half. Kicker Antoine Akundu added the PAT, for 13-7 score.

With 18 seconds left in the half, Akundu nailed a 34-yard field goal and Livingstone took a 17-13 lead to the locker room.

Livingstone’s defense protected that 24-13 lead for the rest of the game. Meanwhile, the Blue Bears’ offense chewed up the fourth-quarter clock on the ground, as newcomer DJ Bethune led all rushers with 86 yards on 18 carries.

Hayes finished with 271 passing yards, completing 13 of 22 passes — and no interceptions. Faraimo led all receivers with two catches for 94 yards.

“Our offensive line did a great, especially running the ball late and eating up some clock,” said Williams. “And the defense came up big, with a late interception, to secure the game. After that, we ground it out and (Clark Atlanta) never touched the ball again.”

The Panthers had taken the early 13-0 lead on TD passes from Stafford, one to Darrell Nichols for 25 yards and the another to Drakar Jerry for 64 yards.

NOTES: Saturday’s victory was the first for Livingstone in an opener since a 49-6 win over Benedict in 2015 — the last winning season for the Blue Bears. … LC opens at home this Saturday, hosting Elizabeth City State in the West End Classic at Alumni Memorial Stadium (4 p.m. kickoff time).