From Hawaii to England, Heggins’ travel expenses top those from recent mayors 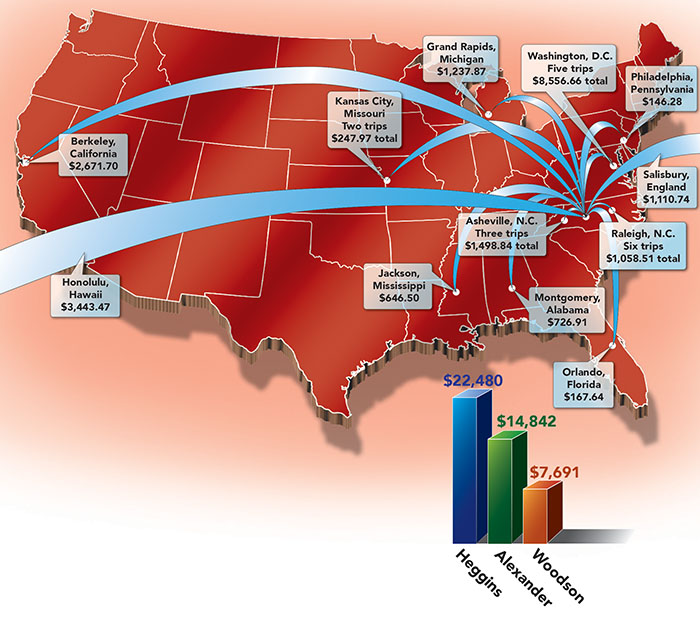 Some of the official travels that Mayor Heggins has made during her time in office. Graphic by Andy Mooney, Salisbury Post.

SALISBURY — Twenty months into her tenure as mayor, Al Heggins has attended 32 conferences, meetings and receptions representing Salisbury and on the city’s behalf.

And, according to public records obtained by the Post ending Aug. 3, the trips to meetings and conferences — from nearby cities of Concord and Greensboro to Salisbury, England, and Hawaii — have cost taxpayers $22,480.63. That’s compared to a total bill of $14,842.60 for 12 trips when Karen Alexander served as mayor from 2015 to 2017 and $7,691.16 for 12 trips during Paul Woodson’s two terms as mayor.

According to City Manager Lane Bailey, council members, including the mayor, are able to individually decide whether and where to travel on the city’s dime.

Asked by the Post about her travel, Heggins said she thought prior mayors were not adequately using memberships in organizations. The duty of mayors, she said, is to ensure the city is represented.

“It is my job to sell my city,” Heggins said.

If the city has a membership in an organization, they need to be “in the room,” Heggins said.

In responding to the Post’s request for comments on her travel expenses, Heggins declined to answer some questions during a phone interview, saying she would respond via email.

Heggins attended Mayors Innovation Winter Meeting in 2018 — the same meeting that Alexander went to in 2016, and Woodson attended in 2014. The three mayors also attended the U.S. Conference of Mayors meetings, which have varied in location. In June 2016, it was in Indianapolis. This year’s conference was in Honolulu, Hawaii.

Heggins said she brought back what she learned from the conferences to Salisbury. That includes information about framing opportunity zones to benefit the community, not investors. And she said Salisbury is now a designated city after she attended the My Brother’s Keeper conference, an organization launched by former President Barack Obama to help boys and men of color reach their full potential.

At the Kauffman Mayors Conference that she attended in July, 2018, Heggins said she brought back conversation about the importance of partnering and supporting initiatives like the Idea Center. If the city, county and Rowan County Chamber of Commerce work together, she said, they will be competitive for Kauffman Foundation grants.

The city’s travel policy doesn’t directly state what the council members should attend and what the city will reimburse. It only states, “the City will reimburse the employee/official traveling on authorized city business for all legitimate expenses incurred for travel as authorized per this procedure.”

Finance Director Shannon Moore says the city encourages employees and staff to be “fiscally prudent” and to spend money like it is their own. The trips have to have a public purpose to be expensed, she said.

“Any employee or city official traveling on official business is expecting to exercise the same care in incurring expenses that a prudent person would exercise if traveling on personal business and expanding personal funds,” the city’s policy states.

The travel budget for the City Council includes all members and the city clerk. In the 2018-19 fiscal year, which ended in June, the budget was $10,482, but the council exceeded its budget, with the actual amount spent being $16,682. For the current fiscal year, the budget supplies $11,500 for travel.

“I’ve been prudent and a responsible steward of the taxpayer’s dollars allotted to the training and travel of council members and have not exceeded what was budgeted,” Heggins said in an email. “Also, my travel has not exceeded what’s budgeted.”

Mayor Pro Tem David Post is among the council members who also went on trips that were expensed to the city. Expenses for his eight trips total $4,592.93. Some of the trips included:

When deciding whether to travel, Post said he considers if the conference piques his interest, if he has the time and whether the cost is low to attend. He has attended a broadband conference for multiple years, even before becoming mayor pro tem, which is where he met Hotwire, now the operator of the city’s fiber optic network. Post said he has been invited back to speak.

Meanwhile, he’s attended other conferences with Heggins and said it’s good to have multiple city representatives in the same room.

When Alexander was mayor, she went on the following trips exceeding $1,000 in cost expensed to the city:

From the U.S. Conference of Mayors trip, Alexander said she brought back the idea of the Mayors Play Ball initiative, a national partnership with Major League Baseball that encourages local events to help boost participation in baseball and softball. That program has been continued by Heggins.

When Alexander attended the N.C. League of Municipalities Annual Conference in 2016, she went with City Manager Bailey to gain information about how to expand the VA cemetery. The city also received a Parks and Recreation Trust Fund grant for the continuation of the greenway after the conference.

“We are spending taxpayer money and I think it is important to bring back something that is tangible,” she said.

Alexander said she looked at the previous mayors’ travel expenses to learn what was appropriate and not appropriate. Then-City Clerk Myra Heard advised Alexander as well.

Alexander said she would like to return to a system that was in place during Woodson’s tenure — when the whole council was aware of travel and council members proposed a trip to the council. Currently, she says it’s “hush hush.”

“I cannot tell you where the mayor has been or the council,” he said.

“We have an obligation to tell the public about it,” Post said.

Editor’s note: This article was updated at 4:45 p.m. Friday, Sept 13 to reflect the fact that Al Heggins declined to answer some questions during a phone conversation with a reporter and asked to follow up by email.