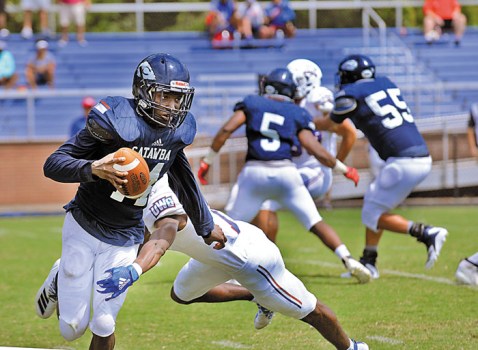 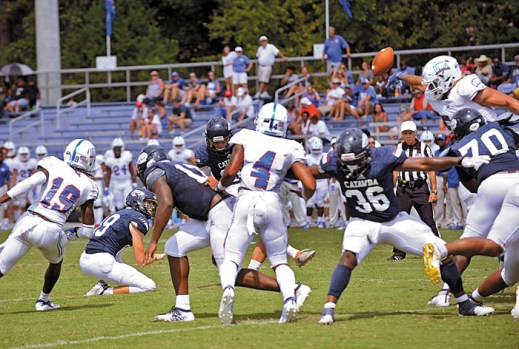 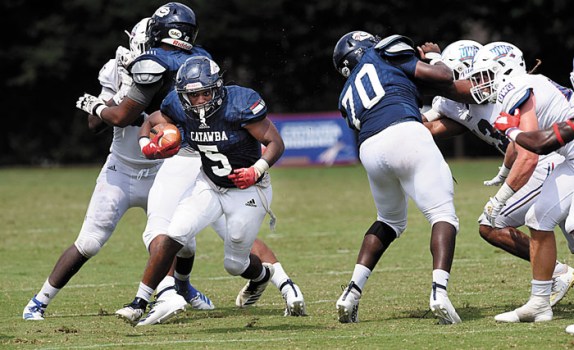 Catawba's Demonte Good 5 with block by Darius Jackson 70.. photo by Wayne Hinshaw, for the Salisbury Post 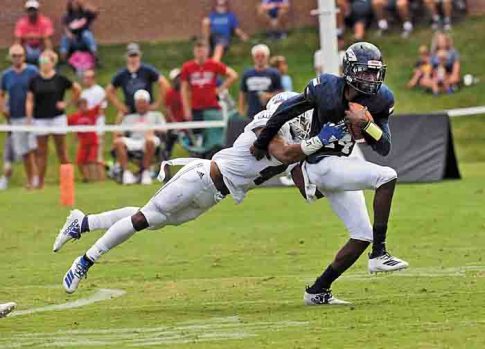 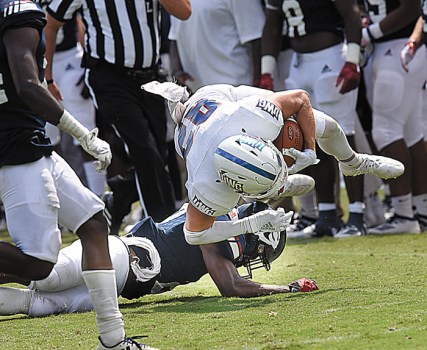 SALISBURY — There was some postgame debate about whether 15th-ranked West Georgia was really good or just really good at taking advantage of Catawba mistakes, but there was no arguing about the bottom line.

West Georgia handled Catawba, 37-9, at Shuford Stadium on Saturday, a result not much different from the Wolves’ season-opening football victories over Catawba in 2015, 2016 and 2018. It’s not necessarily the end of the world. In 2015, Catawba won nine of its next 10 after taking a pounding from West Georgia and made the Division II playoffs.

“I have no doubt that we’ve got a good football team,” Catawba head coach Curtis Walker said. “I’m excited about this team and I’m confident we’ll see better results next week.”

This one started heading in the wrong direction when starting quarterback Ken Avent III went down with an ankle injury in Tuesday’s practice. Catawba had prepared for a long time to have Avent, the returning starter, at the helm. Catawba did a good job of maintaining secrecy about Avent’s injury prior to game time. It’s still hoped the injury is a short-term issue.

Kendall Davis, a transfer from North Alabama, got his first college start as Avent’s replacement and turned in some positives. His 34-yard pass to Chylon Thomas in the third quarter provided Catawba’s lone touchdown. His 41-yard connection with Thomas set up a first-quarter field goal of 45 yards by freshman Clayton Crile.

Davis also had two misfortunes, a second-quarter pick-six that was a game-changer and a lost fumble when he was hit from behind while trying to use his legs.

“Losing Avent was so big for us, but it’s next man up, and Davis did a good  job,” said Catawba safety Brenden Westbrook, who accounted for a team-high 10 tackles. “We lost this one because we made too many mistakes. I didn’t think West Georgia was all that great, but it hectic out there, and they just took advantage of our mistakes.”

West Georgia put up a field goal and a touchdown on its first two possessions to grab a 10-3 lead, but then Catawba’s defense settled in.

West Georgia was forced to punt on back-to-back possessions, but with 3:47 left in the second quarter, Davis never saw freshman defensive back Nasier Currie-Sadler, who broke quickly to pick off his pass near the WGU sideline and set sail for a breezy 35-yard touchdown and a 17-3 lead.

That play changed not only the scoreboard but the texture of the game. Catawba was feeling a bit of desperation when it faked a punt on fourth-and-7 from its 26-yard line with 1:37 left before halftime. Nasjzae Bryant was stopped 3 yards shy of the first- down marker, and the Wolves took over at the Catawba 30.

Catawba nearly had West Georgia’s experienced quarterback Willie Candler on the ground moments later, but he somehow kept his balance and fired a completion to the Catawba 4. That play set up the touchdown that put the Indians in a steep 23-3 hole at halftime.

“When it was 10-3, we were locked in, we were focused and we were stopping them,” said Catawba’s veteran cornerback Cris Page. “But after those two touchdowns late in the first half, it was going to be tough to get back in it. Every time we made a mistake, every time we missed a tackle or missed an assignment, it seemed like they scored.”

“The touchdowns before the half — they took the breath out of us,’ Westbrook added.

Walker said Catawba had  exactly what it was looking for on that disastrous faked punt and had a golden opportunity to pick up the first down and change momentum going into halftime.

“They were defending with eight, and that play was there for us,” Walker said. “We just didn’t execute.”

Catawba got one more chance. Things temporarily turned the Indians’ way late in the third quarter. With the help of two holding penalties, Catawba’s defense got a stop after Davis’ lost fumble, with a West Georgia field-goal attempt caroming off the right upright.

When Catawba scored on the Davis-to-Thomas pass, it was 23-9 (the PAT kick was blocked) with 2:35 left in the third quarter.

Then it looked like Catawba might get the ball right back.  Linebacker Jeremiah Ferguson had a tackle for loss and a sack on back-to-back plays, and the Wolves faced third-and-10 at the West Georgia 40, The crowd was stirring, starting to make hopeful noise, but then Candler whipped a 22-yard completion through a tiny window to Quan Harrison, who was tightly defended by Westbrook. That was a backbreaking throw and catch on the final play of the third quarter.

West Georgia finished that drive with a Candler rushing touchdown — and it was over.

“Experienced quarterback who led them to 10 wins last year and he made a good play,” Walker said. “They made more plays than we did today.”

West Georgia’s Eric Swinney broke a long scoring jaunt with 40 seconds left when Catawba had a lot of youngsters on the field for the game’s final TD.

NOTES: Page had four pass break-ups. … Catawba ran the ball solidly with 44 carries for 156 yards, but without much explosion. The longest gain was 12 yards. Walker gave credit to senior center Kevin Norton, who called out the blocking adjustments. … Candler was 22-for-34 for 220 passing yards. … Catawba plays at Winston-Salem State at 6 p.m. next Saturday. … It was announced that the Wingate contest (the next home game on Sept. 28) will be played at 7 p.m. … In addition to Westbrook (Carson), three more local products played on defense for Catawba, with linebackers Eric Gibson (North Rowan) and (true freshman) Christian Bennett  (East Rowan) and defensive lineman Steven Thurston (North) contributing tackles.