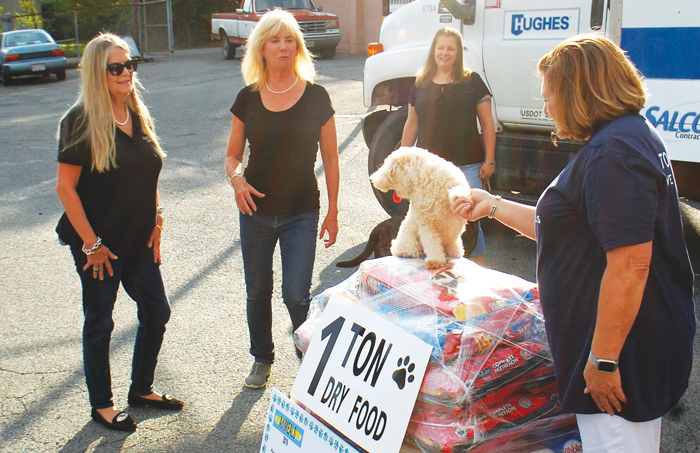 Abby, the dog of Spencer jeweler Debbie Barnhardt, shakes the hand of Meals on Wheels Rowan Executive Director Cindy Fink. Abby became sort of a mascot for the local campaign to collect donations of pet food and money for the AniMEALS program. Mark Wineka/Salisbury Post

SALISBURY — During the month of August, bathtubs on display at Hughes Plumbing Supply on South Main Street and even one at Barnhardt Jewelers in Spencer were not filled with water for bubble baths.

Instead, they served as drop boxes for pet food. Not exactly a Cialis commercial, but the tubs did the trick nonetheless as Rowan County residents donated a weighted ton of dry food, 446 cans and 103 bags of treats for dogs and cats.

Those quantities, plus monetary donations totaling $1,150, were delivered Friday morning on several pallets and in an oversized check to Meals on Wheels Rowan’s AniMEALS program. 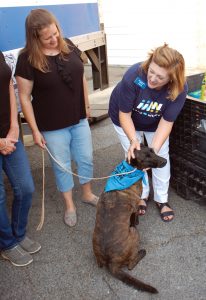 The program provides pet food to homebound seniors in the Meal on Wheels program who have companion animals. Of Meals on Wheels Rowan’s 240 clients, about half have pets, and the new supply of dog and cat food couldn’t have come at a better time.

Meals on Wheels Executive Director Cindy Fink said the organization’s pet food supply ran out last week. Volunteers and staff measured out new portions of pet food Friday, and they were delivered for the companion animals with the regular hot meals to homebound recipients.

This new windfall, generated by the efforts of  Kim Hardiman of Hardiman Design, Debbie Barnhardt of Barnhardt Jewelers, and Lorna Medinger and Samantha Smith, both of Hughes Plumbing Supply, should provide at least four to five months worth of food for the seniors’ companion animals, Fink estimated.

“We would have people all day long bringing in a bag of food or cans of food,” Medinger said.

The pet food came to Meals on Wheels on Friday morning in a Hughes truck. Barnhardt brought her dog, Abby, who became sort of a mascot for the pet food campaign, and Smith’s dog, Abra, accompanied her.

“Abby had her own tub at the store, and it kept filling up,” Barnhardt said.

Fink gave the dogs Meals on Wheels “fuzzy buddy” bandanas and said maybe the organization’s annual Fuzzy Buddy Fun Day could be combined with the pet food drive next year, which the women promised to do.

This year, 14 tubs in all were filled with pet food. “It was fun,” Medinger said.

Fink says the dry food goes into large aluminum containers with tight lids, then is separated through the coming weeks into 1- and 2-gallon bags for distribution. It all stays in Rowan County.

The beauty of the women’s efforts is that the monetary value of the pet food and cash donations will be totaled and used toward applying for a matching grant for additional pet food from the national organization.

PetSmart has made a big donation toward those matching grants.

The women said they couldn’t have accomplished what they did without their own companies’ support.

Pets are important for the homebound because of the companionship they provide and how they help their owners’ health and well-being, Fink said.

The women who spearheaded this project quickly realized that people understand that connection.

“This project was touching,” Barnhardt said. “I think next year we’ll have a lot more people who want to help.”

‘It literally got blown away’: Couple with Salisbury connections…