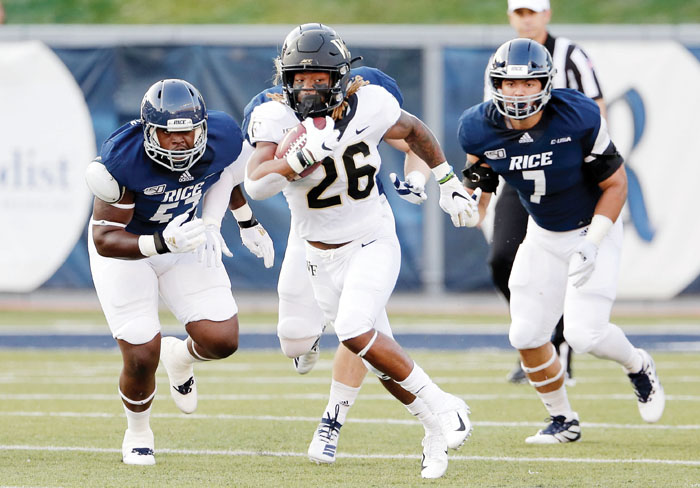 HOUSTON (AP) — With Wake Forest’s running game limited by Rice’s defense early in Friday night’s game, the Demon Deacons decided to take advantage of their size at wide receiver.
Jamie Newman and Scotty Washington made sure the decision worked.
Newman was 21 of 27 for 312 yards and three touchdowns, Washington had seven catches for 158 yards and two touchdowns and Wake Forest beat the Rice Owls 41-21.
“I think we’re pretty good at receiver and protecting well right now,” Wake Forest coach Dave Clawson said. “When teams gang up and play the run, you have to take some shots over top. We’ve got some big receivers that can go up and get it.”
Newman, who started 13 of 14, also rushed for 29 yards. Sage Surratt finished with six catches for 45 yards and a score, and Kenneth Walker III had 125 yards on nine rushes, including a school-record 96-yard touchdown run with 13 minutes left in the fourth quarter, for the Demon Deacons (2-0).
“We had a great day throwing the ball today,” Washington said. “Jamie, he laid a lot of great balls out for us as a unit.”
Wake outgained Rice 513 yards to 321.
Houston’s Tom Stewart completed 19 of 30 for 185 yards and a touchdown after replacing starter Wiley Green, who was carted off the field with 4:44 left in the first quarter. Brad Rozner finished with 103 yards on six catches for Rice (0-2).
Green was trying to dive head first into the end zone and being met by Royce Francis and Justin Strnad. The Rice training staff immediately ran across to the field to the far sideline to attend to Green, who was placed on a backboard. Green gave a thumbs up as he left the field. Green was 3 of 5 for 69 yards.
“The reports we are getting right now are very positive,” Rice coach Mike Bloomgren said. “He has movement and sensation in all of his limbs. We are waiting on a CT scan for confirmation. Things are trending the right way.”
After Rice tied it at 14, Wake scored the next 27 points, with Newman finding Washington for touchdowns of 25 and 59 sandwiched around two Nick Sciba field goals to give the Demon Deacons a 34-14 lead with five minutes left in the third.
“I think it’s what we preach all the time: just finishing,” Newman said. “No matter what the scoreboard is, we take everything play-by-play. Next play mentality. We just have to keep going every series.”
THE TAKEAWAY
Wake Forest: The Demon Deacons were able to keep pressure on Rice’s quarterbacks throughout and finished with four sacks and eight tackles for loss and stopped Rice on the goal line to open the fourth quarter. The Wake offensive line gave Newman plenty of time to throw and keep drives alive. Wake Forest finished 7 of 14 on third downs.
“Defensively, we settled down in the second half and played much better,” Clawson said. “I thought the first half we were very unsettled and they did a good job of keeping us off balance.”
Rice: The Owls were able to recover from an early 14-0 deficit with two quick scores in three minutes to tie the game with 1½ minutes left in the first, but struggled offensively from there. The Owls had a tough time running the ball, finishing with 67 yards on 37 carries. Rice won the time of possession by 12½ minutes.
“We’re not quite there to play an ACC bowl team,” Bloomgren said. “I had hoped we could compete better than we did today. We will keep fighting. We’re going to continue to try to respond in the right way when things go wrong, when adversity strikes, which it does in every football game.”
SLOWING DOWN THE OFFENSE
A week after tying a school record by running 105 offensive plays against Utah State, Wake Forest finished with 62 plays on Friday night.
“We knew that they slowed the tempo down on their end,” Washington said. “We just know that we had to come out on our side of the ball and make the most out of every opportunity we could get.”
TARGETING
Rice starting cornerback Tyrae Thornton was ejected with 9:02 left in the first quarter after being called for targeting on a tackle of Surratt.
UP NEXT
Wake Forest: Hosts North Carolina in the third straight Friday night game to start the season.
Rice: Faces No. 9 Texas on Sept. 14 at NRG Stadium.
___
More AP college football: https://apnews.com/Collegefootball and https://twitter.com/AP_Top25