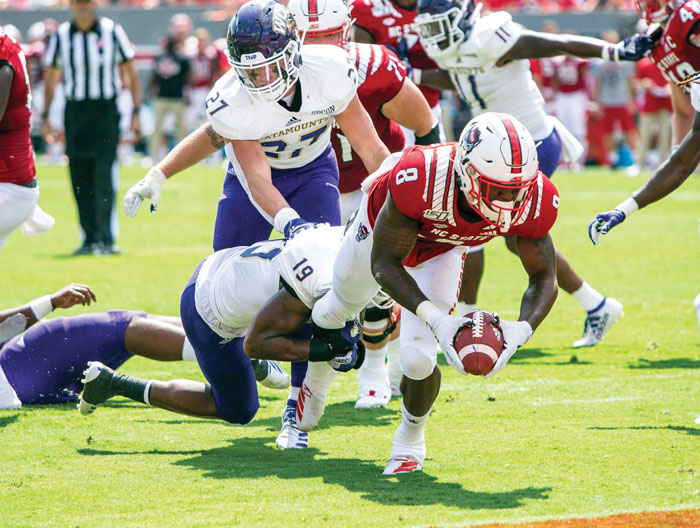 RALEIGH (AP) — N.C. State’s defense held Western Carolina to 106 yards in a 41-0 shutout on Saturday and also was credited with helping get freshman running back Zonovan Knight on track.

Coach Dave Doeren said that Knight read too many of his press clippings during the summer. But after being challenged by the defense in training camp, Knight has bounced back quickly. He scored a touchdown on his first carry in the season opener, and ran for 119 yards and two touchdowns on 18 carries Saturday at Carter-Finley Stadium as N.C. State improved to 2-0.

“I think our defensive kids got after him and put him back in his place,” Doeren said. “And he had a really good finish to camp. He thought it was going to be easy. But it’s not easy. It’s hard. It’s hard to get yards.”

Western Carolina (0-2) suffered its 10th straight loss in a streak that dates back to 2018, and was short-handed after suspending four players for the game for violating team policies. Starting quarterback Tyrie Adams, the preseason Southern Conference offensive player of the year, was suspended along with starting left offensive guard Matthew Bair, starting nose tackle Adam Henderson and reserve Elijah Hall.

“We had a lot of distractions this week with some stuff happening within the program to where we left some guys back at home,” said Western Carolina coach Mark Speir. “I thought we came out and played extremely hard in the first half. Our guys fought and battled. We just ran out of gas in the second half.”

After giving up two first downs on Western Carolina’s first drive, the N.C. State defense dominated. The Wolfpack limited Western Carolina to six first downs and 8 rushing yards for the game to record its first shutout since a win over Eastern Kentucky in 2015.

“We just manhandled them,” said N.C. State defensive tackle Alim McNeill. “We came out strong. We were striking the offensive line. We were just letting them feel our presence and letting them know they weren’t going to run the ball on us.”

N.C. State established a physical presence on offense, too, while rushing for 309 yards. Leading just 3-0 in the second quarter, the Wolfpack turned to the ground game to take control. Six straight running plays concluded with a 6-yard carry by Ricky Person for the game’s first touchdown.

On N.C. State’s next drive, Knight carried five consecutive times for 45 yards, with the final play a 2-yard scoring run. Knight has led the Wolfpack in rushing in each of the first two games.

“Having that experience the past two games, it’s definitely boosted my confidence,” he said.

Western Carolina: Despite entering the game with debilitating suspensions, the Catamounts outgained N.C. State in the first quarter and trailed just 3-0 with nine minutes remaining in the second. The game was a struggle after that, but the start gives the team something to build on as the schedule gets easier.

N.C. State: After a slow start on offense, the Wolfpack got better results by relying on its running game and a fast-paced, no-huddle attack. Running backs Knight and Person appear ready to take the load off sophomore quarterback Matthew McKay.

Knight, whose nickname is “Bam,” showed his quickness with his first 100-yard game and averaged 6.6 yards per carry. “He’s physical,” Doeren said. “He gets north-south. He’s not afraid to throw his body in there. You see him jumping over guys and diving through and running through contact. He’s a 200-pounder, but he runs hard.”

PLAY OF THE DAY

Defensive tackle Alim McNeill crashed into the backfield for a blind-side, first-quarter sack of Will Jones that set the tone for N.C. State’s defense in its first shutout win since 2015.

In its last three home games, N.C. State has prevented its opponents from scoring a touchdown. That stretch includes lopsided wins over East Carolina in 2018 and in this year’s season opener.

N.C. State: Visits West Virginia Saturday for its first meeting of the season with a Power 5 opponent.