‘It literally got blown away’: Couple with Salisbury connections lose home in the Bahamas 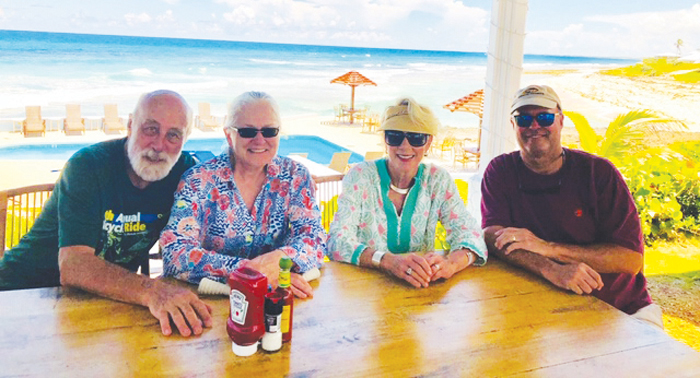 Ted and Ann Tankard, left, share a moment in the Bahamas with Susan and Ralph Wear of Salisbury. Susan and Ted are siblings. This July 30 photograph was taken in Elbow Cay, and Susan Wear says she thinks the home was wiped out by Hurricane Dorian. Photo courtesy of Susan Wear

For 39 years, Ted and Ann Tankard often escaped to their beloved retreat in the Bahamas.

They called it Sugar Reach, and the Tankards purposely built the house small, in the fashion of much older homes in Hope Town and Man-o-War Cay, just so they wouldn’t create a huge footprint in the picturesque corner of the world.

They depended on kerosene, solar and propane for their energy needs, and they kept much of the property natural, enjoying their garden, fruit trees, rocky coastline — and the peace and quiet.

“It is a beautiful place, gorgeous,” says Ted Tankard, a retired oceanographer and brother of Susan Wear of Salisbury.

The young contractor who built Sugar Reach in 1980 made it strong, Tankard says, and the property had withstood many hurricanes through the years.

But it could not survive Category 5 Hurricane Dorian and its 20-mile swath of EF4 tornado wind speeds (166-200 mph). Sugar Reach is pretty much gone.

The Tankards were at their permanent residence in the Richmond section outside Houston when Dorian squashed the Bahamas.

They anxiously watched things unfold on the Weather Channel and checked postings on the Barometer Bob and Abaco Forum websites.

A friend in the Bahamas with a satellite telephone let them know Tuesday evening that their home is gone.

“It literally got blown away,” Tankard says of pictures he has seen. “It looks like tornado damage. That’s the best way to describe it.”

They found out through calls, emails and postings that various friends who stayed in the Abacos and rode out the storm are safe, but Tankard says they’re running out of water, food and diesel fuel for generators.

The Tankards used to live in Florida. They could get to their home on Sugar Loaf Cay in a hour, so they made the trip often. When Ted’s job took him to Houston, the trips became more infrequent — maybe once or twice a year. But since his retirement, the couple had been spending three or four months at a time on visits.

Susan Wear and her husband, Ralph, had visited in July.

The Sugar Reach house was in the area probably hardest hit by Hurricane Dorian. It’s in a spot not far from Marsh Harbour, Hope Town and Man-o-War Cay.

The Tankards are staying put in Houston for now. Ted says he asked someone on the island Friday if he traveled there would he be a help or hindrance. The friend told him he would just be one more mouth to feed.

“There’s really no point in going over now,” Tankard said. “There’s no infrastructure — no power, no water, no transportation.”

The Tankards have no plans to rebuild. Ted says they were in the process of putting the property up for sale before the hurricane.

“This is kind of a clean-break way to go,” he says, not ruling out that he and Ann will return in the years ahead as visitors who rent a place to stay.

Ted will make the trip to the Bahamas eventually to see what’s left of Sugar Reach and the Abaco area they know so well.

“It won’t be the same,” he says. “Personally, I don’t think the Bahamas will come back for a long, long time.”